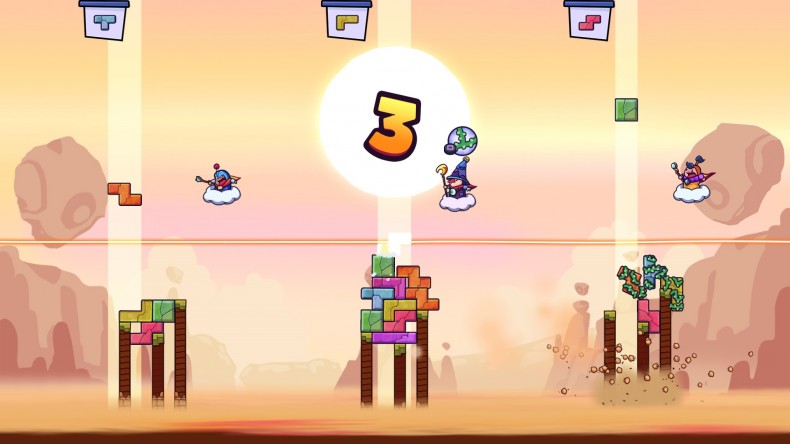 Tetris is quite possibly the best, and most well-known puzzle game ever, it’s been ripped off, copied, and re-iterated, but nothing really compares to its exceedingly simple design and incredibly addictive gameplay. Weirdbeard Games’ take on the tetronomino formula – mobile game 99 bricks – you’re not trying to make your lines disappear, you’re trying to build them up, and sometimes it’s very good, but it can also be just plain annoying.

Tricky Towers is basically a home version of Weirdbeard’s 99 bricks and sees you as a cloud riding wizard tasked with turning falling blocks into a structure that can stand on its own. A rival wizard sits watching your progress and throws in the odd curveball to try and put you off while you attempt to create a tower matching theirs.

This not being the 80s any more there needs to be another twist on the block stacking formula, and here it’s the fact that each block has its own weight properties, you lay it down on a flat point on a flat edge and it’s sit there fine, but the smaller the surface area; the more chance it’ll be toppled, and as the tower becomes higher the more unstable it becomes. Anyone who has played Jenga or tried to build a house of cards will be instantly familiar with the idea. You’ll need to make sure you displace weight evenly across each level to prevent the tower leaning to one side and collapsing. Watching your carefully constructed tower fall is a sight you’ll see on a regular basis, and it never gets any less frustrating. In single player there are three separate game modes which rotate constantly as you go through them. You have the aforementioned straight build, where you have to build up to a certain height within an extremely strict time limit. There’s one where you have to fit all the pieces under a low barrier, turning the game into a jigsaw puzzle. Finally the last mode is a variation on the straight build where the rival wizard will use more powers to put you off; like obscuring your view, or turning pieces into parts of a building.

Making the pieces themselves balance when you’ve been thrown an odd shape is hard enough, but it’s the powers of the enemy wizards that are exceedingly unfair. Some stop you from rotating the piece, others make them gigantic, and one excruciating one sees the pieces drop at an alarmingly fast rate. This can quickly lead to a failed build and a frustrated restart over and over again. With each loss a cruel, sadistic high pitch laughs fills the air as your opponent knows they have bettered you, and before long that laugh will be burned into your brain and you’ll be hearing it everywhere. You have powers to help you, but it’s never explained what they do, or how they’ll benefit you in your building endeavours. There’s no tutorial, nothing to teach you advanced techniques; you’re just thrown in and expected to fend for yourself. If there’s one thing Tricky Towers is consistent with, it’s the unrelenting disdain for the person playing it.

Outside of the single player you have your standard competitive multiplayer option, and that’s about it. There isn’t really much more to talk about in the game at all. It’s all held together in a threadbare menu system that at the very least looks like it fits in with the theme of poorly put together blocks.

Tricky Towers doesn’t do what a good puzzle game should do: it doesn’t make you feel dumb for a while before things finally click and you then feel smart. No, it knocks you down and mocks you relentlessly until you somehow stumble across the right formula only to then smash your head into another brick wall moments later. Don’t be fooled by the cute exterior, this is a game that wants you to suffer and will enjoy every moment of your pain.

Nifty take on the Tetris formula

Tricky Towers is not fun or enjoyable, but you might get something out of it if you’re a masochist.