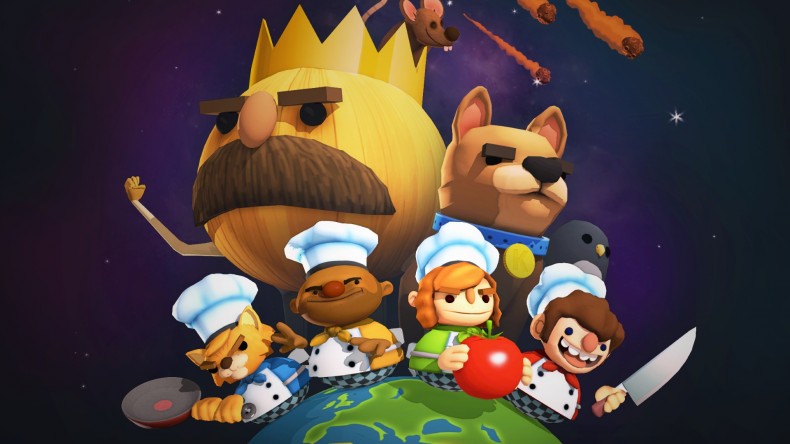 Overcooked, to put in the simplest way possible, is absolutely cracking. It’s just a little bundle of good cooking fun which, according to my mother who happens to be a cook herself, represents the frantic nature of the kitchen environment really well, even if frosty waters and haunted frying pans aren’t things that are *usually* encountered in a real world kitchen.

It’s built around a simple premise: two chefs in a kitchen have to work together to fulfill orders for customers; ranging from a basic onion soup containing one ingredient to the more complex burgers and pizzas which can contain up to four different ingredients. A chef can only do one job at a time, so the aim of the game is to manage each chef efficiently in order to get as many orders out of the door as possible before the time’s up. The more meals you get out to the public the more money you earn, earning you a better score and star rating. So, yeah, the premise is quite simple, two chefs chopping, grilling, frying, boiling, and serving meals to the public, yet despite its simplicity there are a great deal of layers added to the idea that gives some real depth. This all adds up to make Overcooked brilliant fun to play, and it doesn’t get dull because there is plenty of room for improvement.

The depth is added in a number of ways: the different recipes that you are tasked to cook is one, but that is more limited to the amount of ingredients needed in a recipe and how much work is needed on them. For instance, the only difference between a pizza that has four ingredients and a burger that has four ingredients is that with the burger only three of the ingredients need to be chopped or cooked, the bun can just be put straight on the plate. With the pizza, however, the dough base has to be chopped and cooked with the rest of the ingredients. No matter how they’re masked, the chopping and cooking mechanics stay consistent throughout – the real layers come from the kitchens in which you cook.

Things start off simply enough in a big, open kitchen where both chefs can go anywhere and do anything they’d like. There are no moving parts, no restrictions; just a kitchen. But as you progress the kitchens get increasingly more difficult and bizarre. From floating, slippy icebergs to moving trucks which split parts of the kitchen up. From ships on rocky seas to haunted kitchens with floating stoves and very little light. Even the simple kitchen design has several modifiers to it. There are plenty of different kitchens which keep things fresh and challenging. Some are a lot better than others, I’m really not a fan of a kitchen in which the two chefs are completely separated and the only way to pass things between the two is by using a conveyor belt, as that makes it all feel slower, and you’re almost standing around doing nothing for large spells of time. Thankfully the vast majority of the kitchens are top fun. While it can be played all the way through and competently in single player, it just really isn’t the same as when you play with other people. It just feels a little hollow, as if something is missing. That something is undoubtedly the frantic, “oh ma gawwwwd the kitchen is on fire!!” nature of Overcooked which, when playing in couch co-op, leads to moments of hilarity. Playing Overcooked on your own is completely fine, even if at times it is hard to work out which chef is selected, but to get the most out of it you’ll really want to be playing with others, because it’s simply a whole lot more fun. Having to co-ordinate with teammates, pass each other ingredients, make sure the oven doesn’t set on fire, get orders out in the correct order and on time – there’s just so much in Overcooked that is far more prominent when you can scream at someone who’s sat next to you. Playing Overcooked with friends, in the words of my mum: “represents how mad working in a kitchen can actually be. Even the obstacles in Overcooked that aren’t there in real life remind me of things that have caused problems in my kitchen in the past.” But all of this does make it a bit of a shame that there is no online multiplayer, and I worry for its longevity as a result.

While it may not play a massive part in things, the music is nice as well. Each different area has its own theme that gives a lovely and familiar atmosphere to each kitchen. Pirate music for the ship, spooky music for the haunted house, Christmas music for the iceberg – you get the picture. It’s all been wonderfully composed, so much so that I often found myself just staying on the menu and listening to it. Oh, and speaking of, listen to the music on the mission select menu and tell me if it reminds you of “Light of the Seven” from the season six finale of Game of Thrones.

Overcooked is great fun and I think anyone would have a top time playing it, the only real problem is that the fun is much greater and more sustained when played with friends, which might prove to be a problem to some. But with a simple mechanic that has been built upon to keep things fresh and interesting, Overcooked is worth playing regardless.

Not as fun in single player
Some levels are significantly less fun than others
No online multiplayer.

A great slice of frantic cooking fun with a simple premise that is built upon with several layers of depth. While it can be played in single player, the real fun comes from playing with others due to the screams that occur when everything inevitably sets on fire.