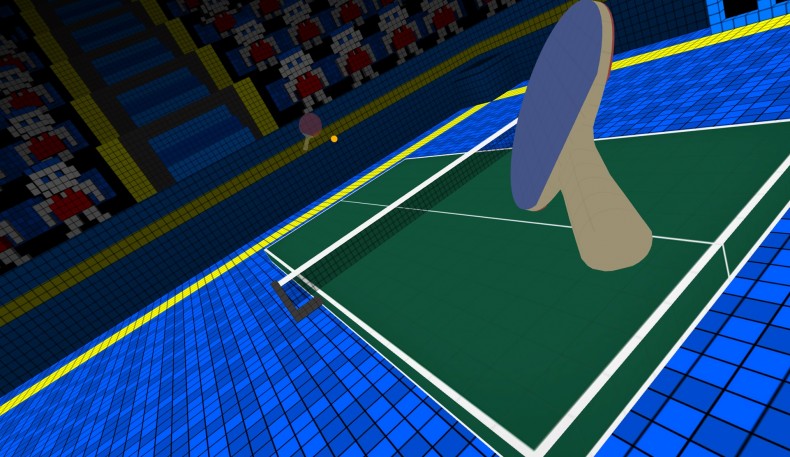 VR is stupidly immersive. VR Ping Pong makes no attempt at visual realism and yet utterly convinces you you’re playing table tennis. The spectating crowd in the bleachers are all literally made of small cubes, giving them a pixel aesthetic – voxel style – not unlike 3D Dot Game Heroes. Meanwhile, your opponent sports the same look but is almost entirely in 2D apart from his arm, which is merely an extendable rectangle with his 2D hand and paddle on the end. VR Ping Pong could not look more like a videogame, but once that ball has been served your focus is fixed on winning the next point; you’re playing table tennis for real and the pixel people surrounding you cannot convince you otherwise.

Of course the second that precious point is won and you look up from the table and see the daft crowd pulling their heads off in excitement whilst remarkably still being able to cheer, you’re once again reminded that you’re in a virtual space. Going to wipe the sweat from your brow only to clatter against the VR headset proves to further remind you of the fakery of it all. But this to-and-fro between states of immersion makes VR Ping Pong all the more impressive. There’s obviously a light-hearted and humorous quality to VR Ping Pong, the pixel crowd and AI opponent are reminiscent of classic 8bit sports games, albeit with the crispness and clarity you’d expect from a modern title. The result is pleasantly charming and nostalgic, like jumping into NES title Punch Out, or more aptly Tennis.

But don’t be fooled by the presentation, behind the scenes some excellent physics ensure that the act of playing table tennis feels as fast and precise as the real thing. Before long you’ll be part of intense rallies, pulling off risky shots towards the edge of the table for glory, and reveling in the crowd’s cheers.

And whilst the quantity of modes is currently very limited, what’s here can still grip you for many hours. One-off games can be played against three difficulties of AI opponent, or you can take to the practice table for unlimited attempts at mastering the mechanics. Meanwhile, a tournament mode pits you against a group of AI opponents across multiple stages and a selection of mini games give you something different try: whether it’s simply hitting the ball against a wall or honing your precision against a broken table with chunks missing. The majority of the mini games are locked, with ‘coming soon’ text to tease you. But of course VR Ping Pong is still in Steam Early Access, so some missing modes, including no multiplayer, is to be expected. Fortunately the fundamentals are solid and you can easy lose hours with the current crop of modes. Furthermore, well thought-out options make this as accessible as possible, with the ability to change the rotating of your paddle and even your height. Additionally, it’s an example of a VR game hitting the right price point at a very reasonable £3.99.

Indeed, VR Ping Pong is terrific fun. This digital facsimile of table tennis sports a charming aesthetic that’s delightfully nostalgic and amusing, yet can still entirely convince you of being in an arena playing table tennis once the action kicks in, largely thanks to excellent physics. Once all features are present this is going to be fantastic, right now brilliant will have to do.

VR Ping Pong feels like the real thing and looks like a stereotypical videogame, and this juxtaposition achieves a delightful pairing of immersion states. One moment you’re convinced you’re in a real match and the next you’re smiling from ear to ear that you were fooled into thinking such a thing. It’s still missing some content but what’s here is excellent.