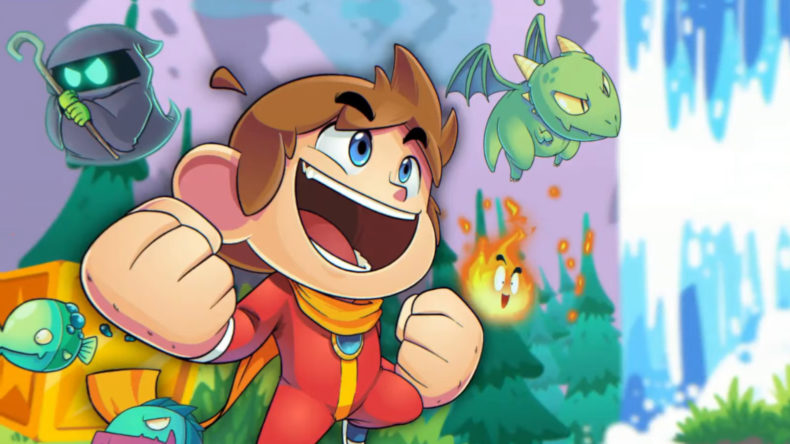 Recent years have proved there is still a market for nostalgia. Do the results ever outweigh the need for the warm fuzzy feelings of playing childhood favourites? Sometimes. Classic titles still hold up, but generally, I’ve found they’re better left in the past. Alex Kidd in Miracle World DX is the prime example of this. Whilst it does look lovely, it’s mightily frustrating to play. Platformers have come on leaps and bounds, but Alex Kidd was one of the founding fathers. That’s why, every time I died, I asked myself why can’t we just move on?

Alex Kidd in Miracle World DX has received a complete overhaul to its visuals. Bold cartoony worlds and colourful characters and enemies make it look lovely. If you want to see how different it looks to the original, the press of a button transports you to the 1986 original. Graphically, it’s as good as anything out there at the moment, and on Switch it looks pretty damn wonderful. Alex Kidd’s journey to stop the evil Janken the Great has plenty of variety in the environments you find. Swimming underwater, traversing volcanoes, surviving sandstorms, and more.

There’s never a doubt how good it looks, but the gameplay is forever a thorn in your side. Jumping is overpowered, with little compromise depending on how softly you press the button. It wouldn’t be a huge issue if you didn’t die every time you touch an enemy. It’s forgivable in platformers where you have hearts, i.e. room for error. However, if you fall on an enemy accidentally, it’s curtains. It’s the same if you run into a crab or a frog. The option to have infinite lives is available, but it doesn’t stop momentum from being broken as you’re thrown back to the last autosave point. 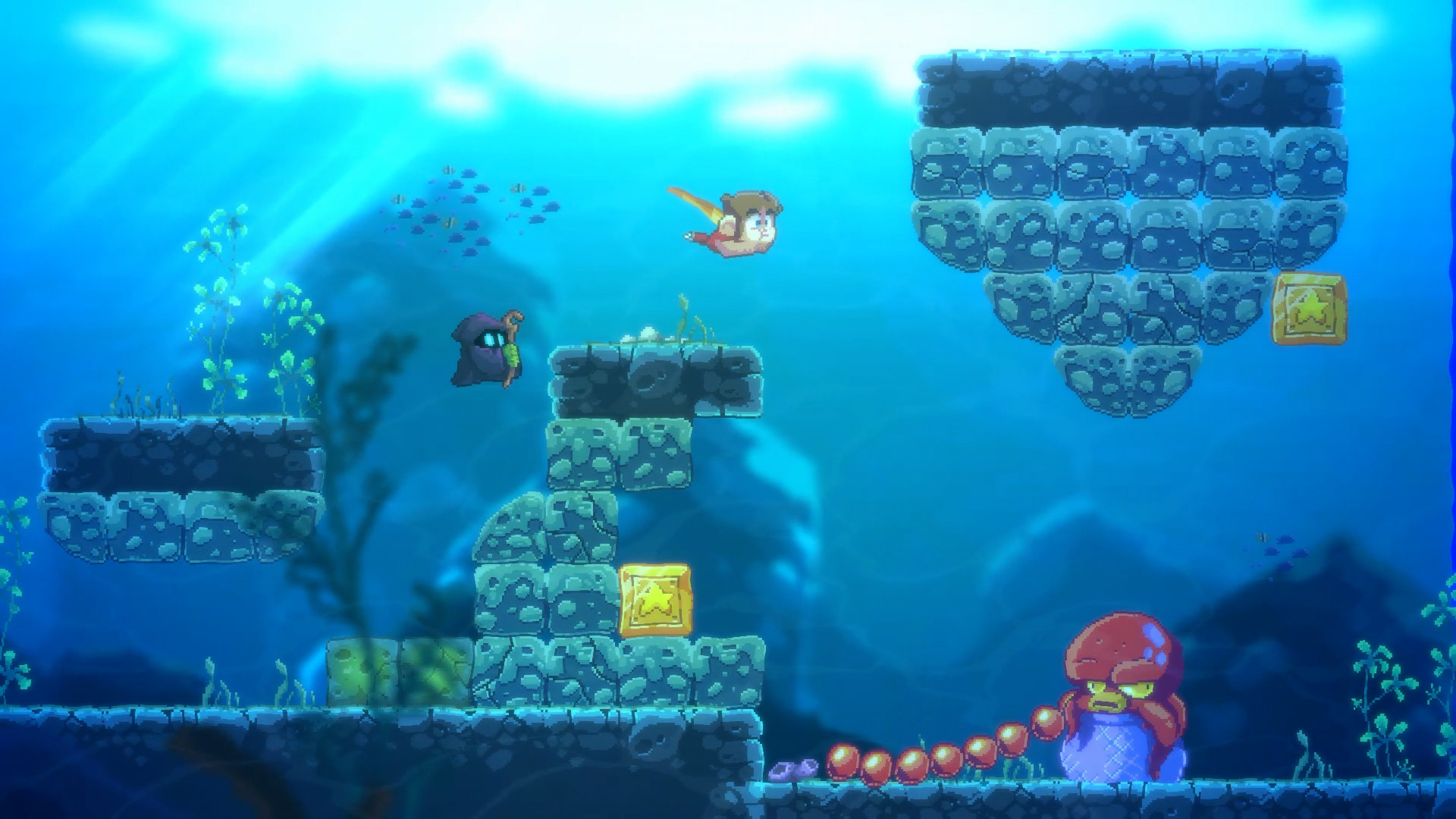 Punch a fraction too late, and death will come calling again. If the controls were tighter, it wouldn’t be an issue. Firstly, the slightest misstep is costly. Secondly, mistakes build up and it becomes laborious. Overall, there are a plenty of times these gameplay errors remove all the fun. Just to see if it was just me, a near 40-year old who’s reflexes aren’t quite the same as they were, I let my daughter have a go. She also found it overly difficult which made me feel better about my failings.

Away from the typical platforming sections, you can hop on motorcycles or fly in helicopters. Again, the problem with doing so is if you ride into a bad guy, you fall off or die. There’re items you can find such as magic rings to shoot fireballs. These can also be purchased from item shops throughout your adventure, along with plenty of other stuff to help you out. Breaking boxes and finding bags of cash will let you spend them here. When you do die, all cash found is retained, so it’s not all bad. 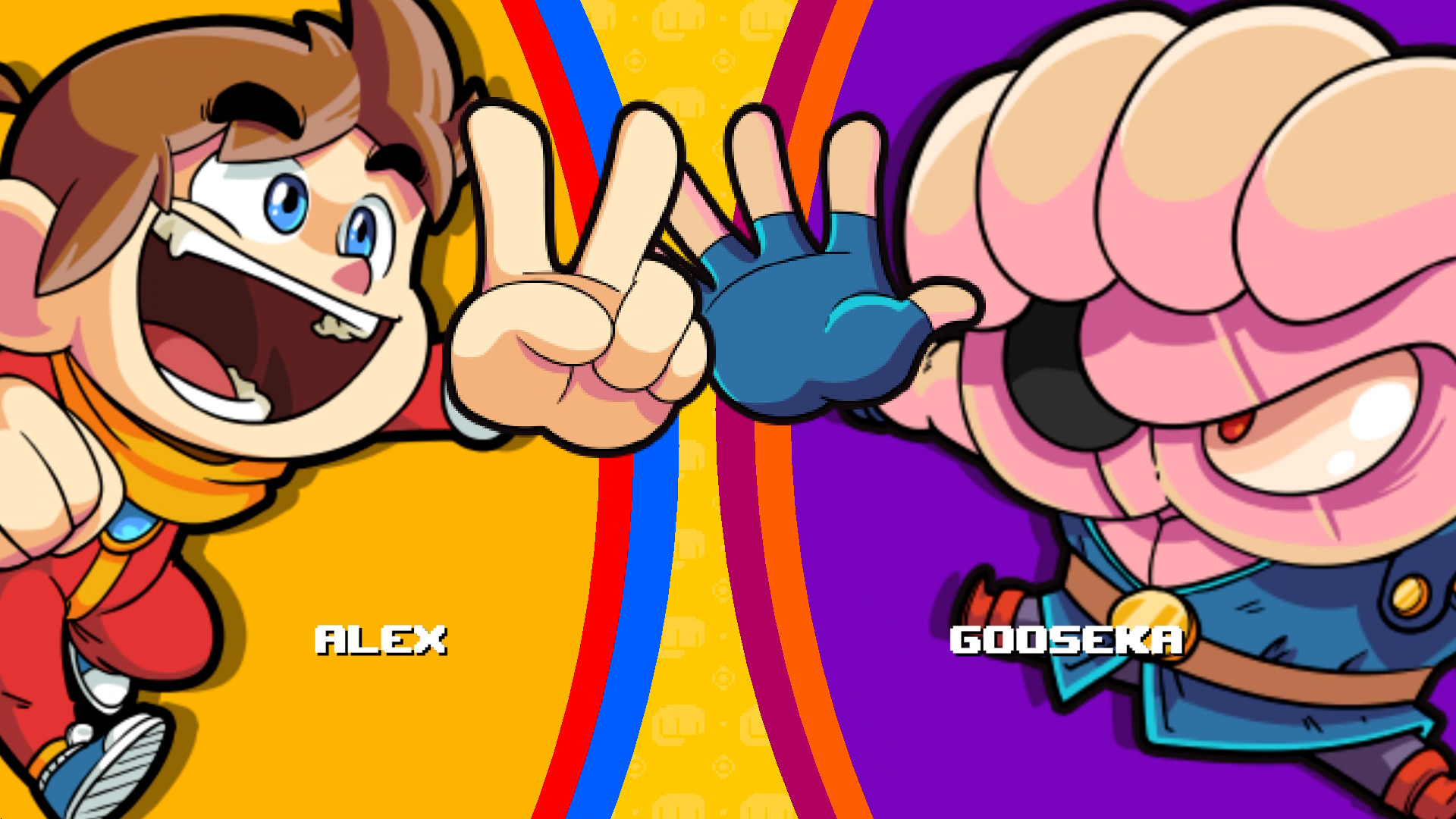 One of the most interesting things about Alex Kidd in Miracle World DX are the boss battles. Whilst there are mini-bosses of sorts, it’d be ridiculous to fight the big boys with such a weak skill set. Thankfully, they play out in games of rock, paper, scissors. They break up the pace of the levels and introduce something a little different. They aren’t thrilling by any means, but they’re nice on the eyes.

If you’re still keen on playing Alex Kidd in Miracle World DX, Merge Games has added a couple of new modes. Classic Mode lets you play the original exactly as it was, and Boss Rush is, well, a rush through all the boss fights. It’s a faithful remake, so fans that remember it well will appreciate what has been done to bring it into the present day.

Alex Kidd in Miracle World DX is a tough platformer where the loose gameplay really affected my overall enjoyment. It’s punishing and frustrating, but it is a very pretty game that makes a 35-year old game look like it belongs on modern consoles. It’s not my bag, but that doesn’t mean others won’t get some enjoyment out of it. I just prefer to play platformers where there’s an allowance for making mistakes and not killing you there and then.

No room for error
Loose gameplay
Often too difficult and unnecessary

Alex Kidd in Monster World DX is a faithful remake of the original, but the difficulty of a bygone era rears its ugly head far too often.