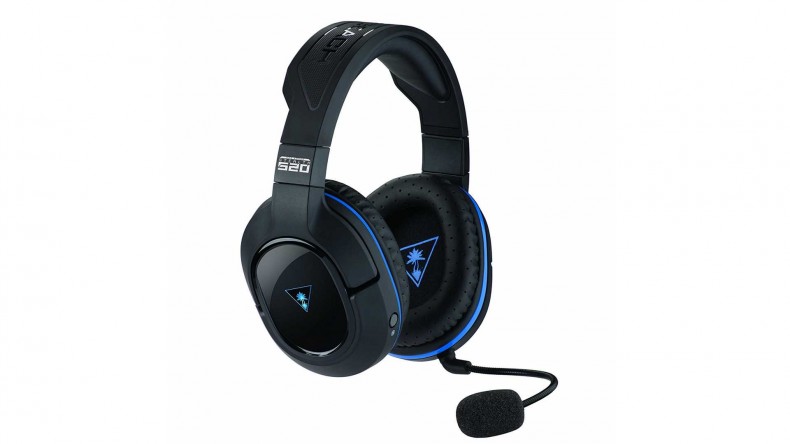 The current generation of consoles, now more than ever, boasts a range of cinematic experiences, with incredible sound design and musical soundtracks, and a good gaming headset can really help you to take advantage of that. Coming in around the mid-tier range is Turtle Beach’s Stealth 520 wireless headset.

The Stealth 520 isn’t a brand new headset, more an upgrade to the existing 500, but with a few additional improvements. It supports full 7.1 surround sound encoded with Dolby DTS, creating an immersive 360 degree soundstage. Packaged nicely, the Stealth 520 comes with a quick start guide to get you up and running swiftly. The package contains the headset, an optical cable, recharge cable, detachable microphone, mobile cable and a USB dongle.

The headset is easy to set up via the optical port at the back of your PlayStation and attached via a wire to the Bluetooth dongle. There is a bit of setting up via the Settings function within the PS4 UI, but once it is done you’re ready to go as the headset and the Bluetooth device are already paired straight out of the box. The headset is fairly light and comfortable to wear, with an extendable headband, and the ear cups fit comfortably and not too tightly around your head. The ear cups turn inwards up to 90 degrees so comfort adjustments are easy to make and should fit most people. The mic boom is detachable via a simple headphone jack, but is slightly less flexible than I would have preferred. I would also have preferred an option to switch which side the mic boom sits as for some reason I prefer it to be on the right side rather than the left, but this is a small quibble.

The Stealth 520 is easily turned on and off by double pressing the button on the right ear cup; a single press will activate the ‘superhuman function’. The superhuman hearing function provides a higher fidelity of sound, and amplifies the more subtle sounds like enemy footsteps and weapon reloading as well as helping to pinpoint the direction of gunfire. I tested this feature many times during online games of Titanfall 2 multiplayer, finding a significant boost to the sound of footsteps compared to when the function is turned off.

The mute button and the volume controls for both the game audio and voice audio are contained on the right ear cup. The mute button is fairly easy to locate on the front part of the cup, while the game and chat audio are on the back. These are a little more fiddly to handle and more than once I turned the game audio up too loud when I wanted to change the voice volume, but with more use this process would become easier.

As well as being able to adjust the game and voice audio you can also boost the treble and bass, if you don’t like either of those options you can keep the sound to a normal balance and you can also boost the vocal audio via this button. The boost to the bass is very strong and combined with the fiddly nature of controlling the game audio it has the effect of being quite disorientating if the volume is too loud. Each press on the control is signposted by a female voice advising of the function you have used so you can keep track. It was a small thing, but with the controls being located on the ear cup, I found it useful to be told what I was actually doing.

The sound clarity is very good, with a full stereo affect. In game, the chat audio is also pretty clear. You can test your own voice levels via the settings within your PlayStation UI, and the headset via the voice boost control can feedback your voice so you can adjust accordingly. The battery life seems to be decent. I have been using the headset for three consecutive evenings for an hour or more and have yet to recharge which is encouraging. The wireless range is also quite impressive, providing a decent distance from your console.

The Stealth 520 has been specifically designed for PlayStation use, but you can also use it on your PC. Set up on there is equally simple with the appropriate drives located and installed quickly. For a mid-tier headset, the Stealth 520 is a decent purchase. The sound quality is satisfying and the ability to adjust the game and chat audio on the fly is very useful. As an owner of both a PlayStation 4 and an Xbox One I would prefer a headset that can be utilised over both consoles rather than having to have a specific one for each, but for standalone PlayStation owners the Stealth 520 is a competent choice, particularly for players interested in multiplayer as the superhuman function provides an discernible audio advantage.