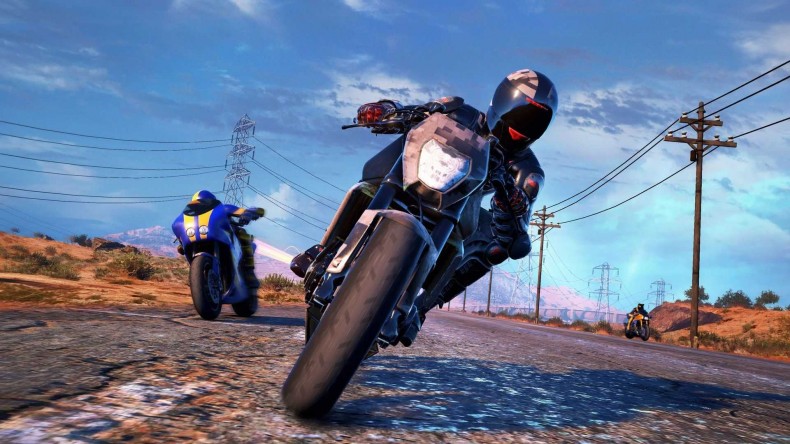 I’ve grown to like motorbike racers again this year. Ride 2 was a decent enough attempt at creating a Forza-style game for two-wheeled machines, but Valentino Rossi: The Game was a fantastic circuit racer and brought the MotoGP franchise back to the top of the pile. Those were both good examples of the more realistic variety of racers, but what about the arcade scene? That’s where Moto Racer 4 comes in.

It’s been a while since the last real Moto Racer game, if you don’t count the DS release or the almost-unheard-of Moto Racer 15th Anniversary. Moto Racer 3 was released back in 2001, so is Moto Racer 4 a bit late to the party? With two forms of racing, road and dirt, there’s potential for tonnes of content in Moto Racer 4, and its fast-paced arcade gameplay will ensure that your adrenaline levels will remain suitably high throughout your time spent with the game. It will also test the limits of your blood pressure though, thanks to its physics’ tendency to freak out, and the weird, unfriendly difficulty.

Before every Career mode event (there are chases and time attacks to accompany traditional races) you will select whether you want to aim for one, two or three stars, with one star only needing a third place finish, and up to three stars requiring a first place finish. So far, so good, right? The problems lie in the extreme gaps between each difficulty level, as the AI’s speed increases to ridiculous and unfair levels even on two stars.

You do have a choice of three characters to choose from, each with their own balance of abilities, which can be upgraded throughout the career to improve speed and handling. Unfortunately, a few rounds into the career will require you to use a specific character and if you haven’t already upgraded him, you won’t stand a chance and will have to go back and grind a few races to earn those precious upgrade points to proceed. This awkward and unfriendly progression also applies to reaching each stage of the Career mode, as you require a certain number of stars to unlock each new stage. That’s fine on the surface, especially as it forces you to get at least a couple of two-star results to progress (encouraging you to get better at the game, despite the war of attrition required to do so), but the problems start when your stars are taken away from you if you fail. That’s right, if you aim for two stars and you can’t reach second place, you will be punished by receiving minus two stars for that event, subtracting from your overall total. It’s an incredibly strange decision, especially in a game that already has unbalanced difficulty levels from the off. You can’t even restart races if something goes wrong, and it will go wrong thanks to the number of bugs that infest the physics. On more than one occasion, my bike was catapulted into the air by nothing, the collision detection clearly way off, and there have been other issues that have flipped my bike the wrong way and even thrown it off the map entirely. Moto Racer 4 is riddled with these problems and it makes it incredibly difficult to recommend even trying it.

The gameplay itself isn’t too bad when it does behave though, once you get used to the overly twitchy handling. The sense of speed is immense and it constantly keeps you on the edge of your seat as you weave your way through traffic on busy freeways (that end horribly if you aren’t careful), or thread through pipes and plane carcasses in dirt races, using wheelies to boost yourself ahead of the competition. Road races have a Burnout feel to them, but the ability to swerve into your opponents and knock them off their bikes also adds a bit of Road Rash into the mix, although the game can live up to neither of those classic series. The dirt races are far more fun and varied, with proper multiple routes (there are some alternate routes in road races but they’re few and far between, like those in older Need For Speed games) that can win or lose a race when used at the right time. These feel closer to the old ATV Offroad series or Microsoft’s Motocross Madness games, but again nowhere near their quality, and only serve as a reminder that Motocross Madness kinda fell apart when its third game arrived on Xbox 360. Running on the Unreal engine, Moto Racer 4 does at least look decent at times, if not particularly stunning. Lighting effects are impressive and the whole game is as colourful as its arcade influences might suggest, with flashes and light trails up the wazoo, making a nice change from the drab greys and browns of many games this generation. The variety of levels is nice too, with lots of greens, yellows and blues especially prevalent in the dirt tracks, with lush forests and waterfalls, and even what seem like impossible plane graveyards making up just a couple of the tracks in the list of seven dirt tracks. The seven road tracks are still pretty enough but most are generic locales, with no real standouts to speak of. There is some horrendous pop-in when levels first load up though, nothing new for the Unreal engine, and the framerate just isn’t very smooth, which just isn’t acceptable in a game that doesn’t exactly push the boundaries of this generation of consoles.

With its unfair AI and unfriendly progression system, Moto Racer 4 is incredibly difficult to recommend. Even masochistic players will struggle to derive any enjoyment from the game, thanks to its broken physics and uninspired track designs, not to mention its ridiculous difficulty. The real shame is that the Moto Racer series used to be good, and there’s potential here, but it feels like an unfinished game that could have done with another few months of development.

Despite a great sense of speed and some classic influences, Moto Racer 4 is riddled with bugs and simply fails to live up to its series’ legacy.

Asterix and Obelix XXL 2 hits all platforms this November