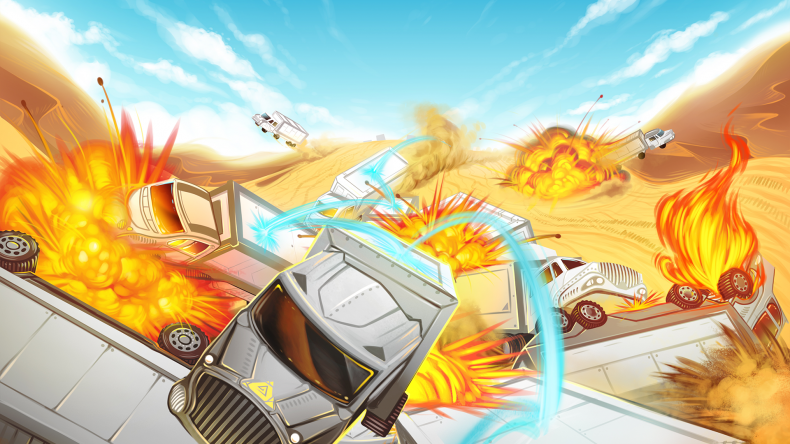 I don’t think there has been a game this year that’s made me get as angry or annoyed as Clustertruck, and I’ve played Dark Souls 3. I don’t think I’m particularly bad at games either, but this made me feel like such an amateur, a rookie, even though I’ve been playing video games since I was 7 years old. It’s bastard hard, but occasionally the physics can let it down and you realise that it’s not 100% your fault.

In Clustertruck, you have to jump on a shitload of moving trucks in each level, reaching the finish line in one continuous movement, all through a first-person perspective. If you fall off, touch the ground or get walloped by one of the many obstacles you encounter, it’s back to the start. Ever have that dream where you’re floating down the stairs, occasionally feeling a step underneath your feet? That’s how it feels to play Clustertruck. There’s an abundance of levels for you to play, all taking place over different themed worlds including ancient, winter, medieval and steampunk. In the first world, the desert, it doesn’t feel particularly challenging, but towards the end it really picks up. You start to feel tested and the need to implement more patience and skill is necessary. I really struggled with Clustertruck; it’s chaotic and no two runs are the same, providing no opportunity to remember the way certain trucks move on specific points of the course. There can be hundreds of trucks on any level at any one time, and they crash into each other, fall off the track and can even blow up. You have to be incredibly focused on movement and your reflexes need to be sharp, otherwise you’ll never get anywhere.

There were many occasions when I had worked my arse off to reach the end of a level, only to have no trucks left to jump on because they’d all suffered a dangerous end. If a game doesn’t give you what you need to finish a level, then in my books it just isn’t acceptable. Screaming blue murder and shouting at the inanimate object that is your TV because you can’t progress due to broken physics ruins the experience; pair that with an extremely difficult level structure and many are going to give up fast.

Clustertruck isn’t a bad game though, and many of the levels have superb structure. There are obstacles like swinging mallets, moving bridges and hanging boards all ready to knock you out, and managing to beat a level after facing these is a real achievement. The different worlds all offer something unique, and the blocky minimalist design helps to take away any distractions other than the course itself. Now, if you can finish this game without unlocking any of the special abilities, you aren’t human. In fact, I will find you and worship you until my dying breath. Abilities in this game are vital if you are ever going to progress past the first world. By gaining great air time or completing a level without dying, you earn points, and with these points you can buy loads of cool upgrades and different utilities to make things much easier. There’s a grappling hook for you to move from truck to truck easier, a jet pack, the ability to double jump, and more. Essentially they all make movement much easier, and they’re all vital. You can also unlock utilities like freezing trucks or slowing down time, again making things a million times easier.

It’s massively frustrating and gruelling, never giving you a chance to catch your breath or revel in your achievements; there’s even a boss battle at the end that comes completely out of the blue. Clustertruck is a speed runner’s delight, separating the weak from the strong and is most certainly going to break a good many of you (just like me!). Regardless, it pushes you to the limit and does its hardest to keep you playing, implementing the “one more try” mentality that gamers around the world have adopted since the beginning.

Bugs can stop you completing levels
Too hard at times

I’ve not felt this challenged in a long time, and the levels do nothing but push you to the absolute pinnacle of your resolve. It’s just a shame some of the game’s bugs can ruin your progression.