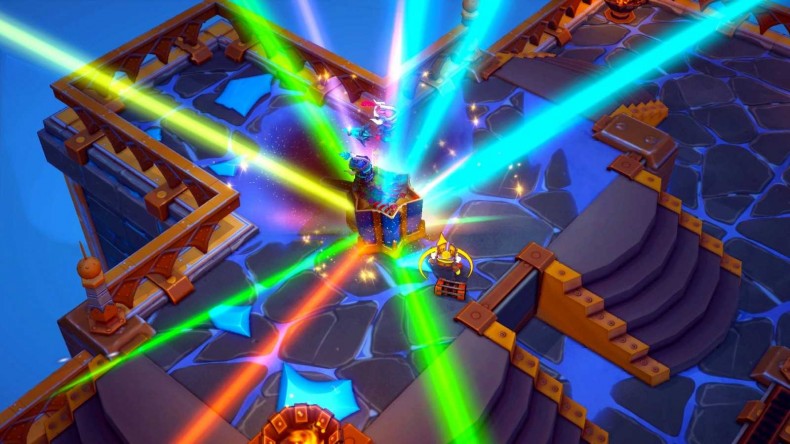 Super Dungeon Bros should’ve been great; it’s colourful, action-packed and above all, it’s a dungeon crawler, and I love dungeon crawlers. But alas, the controls feel clunky, the humour is lazy and the game can get really difficult if you’re playing alone. There were times when I was fighting the hordes of monsters and I really enjoyed it, but the repeated use of the same two strikes gets tiresome, and the levels aren’t always inspiring. It’s not terrible, it’s just doesn’t really motivate you to keep playing.

You and your three bros must raid the dungeons of Rockheim, beating up the undead and gathering gems to spend on new weapons and other attire. You can play solo, but I wouldn’t recommend; it takes ages to get anywhere because the difficulty ramps up far too close to the beginning. Co-op is the way to go, but unless you’ve got friends to play with, there aren’t too many people online at the moment. Hopefully this’ll change because currently, local co-op is the only way Freddie, Lars, Axl and Ozzie will be able to battle together. When you step foot into your first dungeon, the only weapons available are a big sword or a crossbow. It’d be fine if the crossbow wasn’t so terrible. It was clearly meant for long range, but you never get the chance to be far enough away without getting attacked to be able to use it, making it redundant. The sword is pretty effective, but with only two attacks there’s a lack of any distinction between the two; strong attacks are 360 degree swings and the light attack is a case of blade thrusts in quick succession. The strong attack does do more damage to start with, but after reaching depth three, they both kind of blend into one. You can’t move when attacking and it makes movement clunky and slow. Earning gems unlocks new weapons, so there are plenty of chances to try out a new wand or an axe, it just takes time to get to that point and by then, you may have grown fatigued with the whole thing.

The humour feels forced, and the main bros get annoying fast, especially after hearing Freddie’s laugh or hearing Lars shout ‘schwing’ a la Garth from Wayne’s World for the hundredth time. You can press directions of the d-pad for comedy sayings, but it isn’t very funny and doesn’t really add anything to the gameplay. The bros look like chubby Lego, but the humour is far from the same levels of wit and humour featured in Traveller’s Tales’ wonderful games.

Super Dungeon Bros does have some decent level design across Rockheim. There are plenty of traps that not only cause you grief, but if played right, can be used against your enemies. For example, in Cryptheim (the creepy first location), jumping on one of the mechanisms for the spinning blade can cause plenty of enemies to get cut up and killed without you ever having to wield your blade. No two dungeons are the same, thanks to the procedural generation, and sometimes you’ll find plenty of loot in one and less in another, but this happens with all games that deal in procedurally generated dungeons. The main problem is, levels feel too similar and it can take some time before you encounter anything different from the last five you’ve seen. One of the things I did enjoy about Super Dungeon Bros is the threat meter. Once that fills up, you’d better run because the gates of hell open and the undead world and its wife throw everything at you, balls and all. Luckily, it only tends to fill up towards the end of the level because it builds up the more enemies you kill. Trying to fight or escape can provide some tense moments, and as the game ends once all your lives have gone (akin to traditional platform games of old), the pressure can be thrilling.

There are some decent mechanics like the threat meter and the ability to use the dungeon’s traps against your enemies, but levels are more dull than dapper, and it takes some time until you’re treated to any real thrill. Boss battles, once you catch on to what you’re doing, are pretty unoriginal, and some of the traps can be used too much in a level, like those damn spikes. Co-op is the way to go to get the most enjoyment, but even then it can be tough to keep playing after a prolonged stint.

A decent attempt at a dungeon crawler, but there just isn’t the same appeal or craftsmanship seen in games like Diablo 3 or Baldur’s Gate.