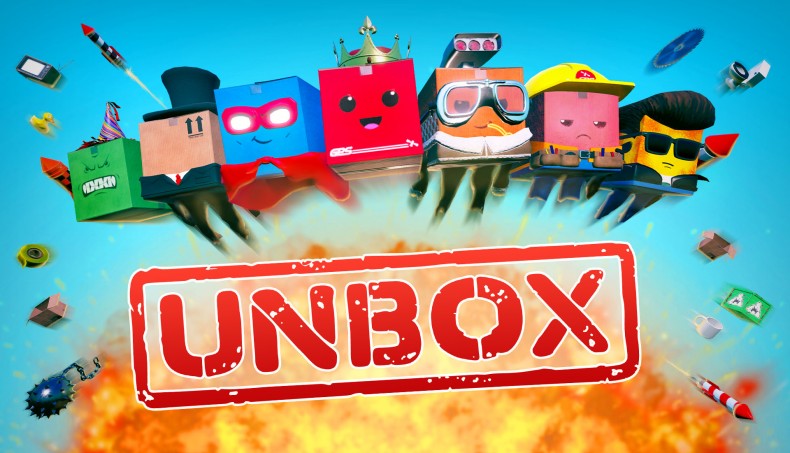 There’s something about Unbox that brings back fond memories of playing on those Nintendo consoles of yore, and Prospect sure has encapsulated the fun and frolics of the golden years of 3D platformers. The colourful world is there, as is the upbeat soundtrack and the innocent humour, but there are a few issues with the gameplay and the campaign which let it down.

You are a cardboard box called Newbie and you’re here to save the day. The Global Postal Service (or GPS for short) is in financial turmoil and as a result, they’ve created sentient, self-delivering boxes; it’s clear to see why they’re nearly bankrupt if they’ve been spending it on building conscious, living packaging, but hey ho, videogames! As their latest creation, you must save the day fighting the evil Boss Wild (the first ever created sentient box) and his mean bunch of cohorts, the Wild Cards. There’s some great humour throughout the campaign and the vanilla story is brought to life by characters that are well aware of how silly it all is, constantly making fun of themselves and each other. The main story campaign sees you exploring a fairly big world made up of mountains, beaches, shanty towns, snowy villages, and more, looking for challenges to complete. Once you’ve completed a set amount of challenges, you get to take on various bosses (once you’ve collected the right amount of stamps), but after a while the challenges start to feel similar. Whether you’re delivering a package in a set time, racing around a track or fighting off the Wild Cards, there’s no real variation. Getting around in Unbox takes no time at all, so hitting certain times in the challenges can take the difficulty away – another problem with the campaign’s tasks.

The control system isn’t too bad, but you can end up misjudging a jump or putting too much power in one. I lost count of the amount of times I tried getting from one rock to another and landed in the water. You can get some serious air in your jumps, and the ability of unboxing helps you to do this. At the press of a button, you can add an additional jump onto the last one and by doing so will keep you off the ground for a little longer. To battle enemies you have the power to slam your opponent, landing on top of them and knocking the bejesus out of them. There are opportunities to fire fireworks at the Wild Cards and provide a bit of firepower when necessary, mixing up the combat even if it’s only by a little.

If you like customisation, there’s a chance to pimp your box; by visiting Swift Tailoring, you can try on new outfits, change your skin and add additional appendages (like hats and mustaches) to your cubic frame. If you aren’t fond of changing your look and you’re tired of the same old challenges, you can go on the hunt for gold tape. They’re collectibles located all over the island and the task of finding them helps to make it feel like an old 90s 3D platformer. The multiplayer is OK, but it’s more of the same. You can take part against friends in a range of games, such as collecting the most gold tapes or shooting fireworks at each other. It’s more fun than the main game, but unlike Mario Kart or Super Smash Bros, there’s not enough here to keep you playing; once you’ve played a few games, you’ve had your fill. It’s ideal to play with your kids because the mechanics are pretty straightforward, minus the issues with jumping.

Unbox looks lovely and does its best to instill memories of your younger years, but it doesn’t do enough to keep you playing. The campaign begins to feel stale after a few hours and the controls can sometimes cause you problems. The multiplayer can be fun and will probably do a better job entertaining your kids than it would your adult friends. Don’t pass it by because it does have a certain charm to it, but if there are other games on your radar, come back when you’ve slashed your gaming backlog.

It reminds you of those great 3D platformers of the 90s, but never manages to reach the same heights as they once did.