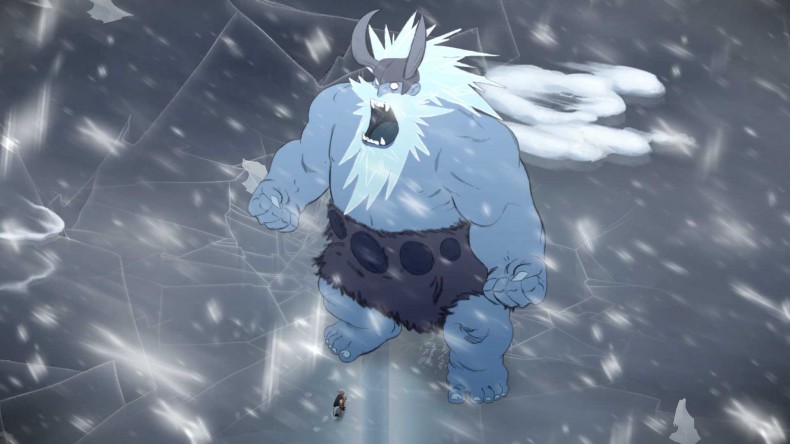 Let’s face it, for the majority of people, knowledge of Norse mythology is likely limited to Marvel’s Thor films. It’s a setting not often explored in mainstream media, unlike the overabundance of films and games based on Greek mythology, but may soon be thrust into the gaming limelight thanks to Sony’s new God of War game and the re-release of Skyrim. Before those, there is Jotun, finding its way to consoles nearly a year after its PC release.

After an inglorious death at sea, Thora finds herself in Norse Purgatory, given a second chance to fight for her place in Valhalla. Wielding her mighty battleaxe, you will aid the warrior as she tracks down the elemental Jotun – giant godlike beings that must be slain so Thora can earn her place among her ancestors.

Ginnungagap serves as the main hub for the game, leading out into the five areas you’ll need to visit in order to find and kill the Jotun. You can actually play the levels in any order, but that’s only for those seeking an even tougher challenge than is already provided. A pair of crows will rest at the entrance to the currently suggested level, offering a subtle clue instead of flat out telling you where to go next. This is probably the best way to direct the player, especially in a game as artistic as this. The art direction is beyond stunning; its hand-drawn style evokes memories of both Bastion and Samurai Jack, and gives every area and creature a real personality. The animation is just as fantastic too, feeling almost like you’re taking control of a high quality movie as you explore the various levels. Each area has its own look, representing each elemental being, from the beautiful Yggdrasil to the frozen realm of Niflheim, and every one looks absolutely gorgeous. The high quality of presentation isn’t restricted to visuals either, as the sound design is just as dazzling. With a score that wouldn’t be out of place in a multi-million dollar epic, Jotun’s music adds extra weight and atmosphere to every part of the game, and is genuinely a delight to hear. It perfectly compliments the setting, alongside the Icelandic dialogue that further immerses you in this Norse tale.

But how does the game play? Incredibly fluidly, it has to be said. Viewed from a top-down(ish) perspective, Jotun is a game mostly about exploration, and can essentially be billed as a cross between Bastion and Shadow of the Colossus. In order to gain access to an area’s Jotun, you must first journey through two levels in order to find their runes and unlock the door to the boss arena. Most of these levels offer little to no combat, instead focusing on environmental perils such as Niflheim’s deadly, freezing blasts of wind; others are even puzzle-based, tasking you with finding the correct route through the area. Within these levels are various collectibles, but they aren’t just meaningless statistics here, they are golden apples from the goddess Ithunn that increase your maximum health. There are other bonuses to be discovered as well, in the form of statues of various gods that bestow their powers upon Thora. These range from Thor’s hammer or Frigg’s healing warmth, all the way to Loki’s ability to create illusions of yourself in order to confuse and damage the few enemies you encounter. After discovering the two runes within an area, you return to Ginnungagap to unlock the magical door to whichever Jotun you’re currently hunting. You may have already spied the giant during your travels, as they are often seen in the distant background, their sheer size evident even from such a huge distance. It’s a great way to convey scale and to unnerve you before you’ve even reached the boss. Much like Dark Souls, each boss starts out relatively slowly, using a few set attacks before reaching a second and third phase as you whittle down their health. Every battle is a challenge, as your attacks knock millimeters off their health bar, while a single hit from them can take half your life or more. Some may find this unfair, but these beings are the size of buildings, of course they’re going to hurt you a lot. It’s a good job Thora is as gloriously strong as she is, otherwise you’d be squished in seconds.

That said, a couple of the bosses do seem overly harsh at times. Most will take multiple attempts as you learn their patterns and find their weaknesses, but in one particular battle the camera adds an extra layer of challenge that just isn’t very fun. It zooms out so far that even on a large TV Thora is difficult to see, and then it adds mobs of enemies whose bodies stick around indefinitely, creating a sea of jumbled colours that makes it difficult to determine what exactly is happening down at ground level, all while you’re trying to avoid the attacks of the towering Jotun. While it is impressive that so many sprites remain on screen without affecting the buttery smooth framerate, it turns what should be an epic battle into a bit of a frustrating mess. The combat does flow nicely though, even during the more frustrating moments, and is as simple as it should be. On PS4, Square is light attack, Triangle is a long-winded but very powerful strong attack, while Circle activates your currently selected power (such as Frigg’s healing) and Cross executes a dodge roll. It’s not particularly deep and doesn’t need to be, as its simplicity allows you to concentrate on battling the Jotun instead of trying to remember a combo sequence, or balance stamina use a la Dark Souls. And if you really enjoy the combat, completing the story unlocks Valhalla mode, which is like new game plus but without the exploration levels, only the instant action of boss battles. With increased difficulty, and all powers unlocked (it is actually possible to finish the story without finding them all), Valhalla mode offers an incredibly tough challenge for those seeking extra glory. And trophies or achievements, of course.

A stunning soundtrack and generally beautiful presentation combine with thoughtful exploration of both the environments and Norse mythology, and its intense battles with towering bosses make Jotun an adventure well worth playing. It’s challenging, rewarding and absolutely amazing in-motion, and at around four or five hours long, it never outstays its welcome.

Not much replay value
A couple of harsh difficulty spikes

Jotun offers the exploration and storytelling of Bastion, and combines it with the epic battles of Shadow of the Colossus. What’s not to like?