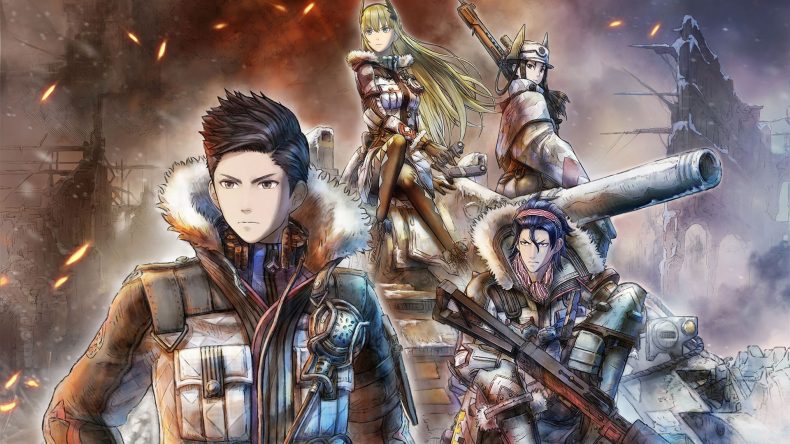 There’s a point early on in Valkyria Chronicles IV where you’re given an APC for the first time and told to ‘Learn how to use it quick’, and it’s there Valkyria Chronicles IV stops easing you in to the myriad mechanics and like a dad helping their child to ride their bike lets go of the seat on the set off for the first time and watches the kid topple off.

This example is a bit of a baptism of fire and marks the point where the game’s difficulty ramps up considerably, granted a game can’t hold your hand forever but where this gets introduced is in a fight where there’s so much going on that it’s easy to get overwhelmed. The sheer size of the map, the fact the goal lies so far away and you only have twenty turns to achieve it, instills a sense of panic in you that causes you to make mistakes, when of course a level head and a measured approach will see you win out in the end.

That said there’s a lot to be said for the tutorial, here, as this is a title that introduces a lot of things constantly and, unlike some games where the mechanics are trotted out in static screens, here they’re well worded, properly laid out, and thorough – so you shouldn’t find yourself fumbling around to achieve your desired result. There’s a tutorial for everything as well; heck, even when you go to view old tutorials there’s a tutorial for that too. Each fight awards you with experience points and also Ducats (DCT) which are used to improve your personnel and your equipment respectively. Once you’re through your first proper mission and are able to access the headquarters you can use exp to improve your soldiers on the training ground, here you apply points to a class with all members of that class benefiting from the improvement. Leveling up improves the stats of your personnel and also gives access to new potentials for them. Potentials are abilities that randomly activate during battle and can have positive or negative effects; you might find that a character will have improved accuracy, defence or evasion in one turn or as I found out in one battle you might have someone who randomly loses their ability to move making them practically useless (damn you Neige).

You’ll improve your guns, uniforms and vehicle equipment by spending ducats, with upgrades trotting out incrementally as the game’s story progresses, everything has an upgrade path that can diverge with one set of stats improving in one direction such as better accuracy but at the expense of damage to people. Vehicle parts when created have to be applied in a grid with you having to slot the new pieces into place like tetronominos. You’ll want to spend quite a bit of time messing about with your gear to help you get through some of the later, harder fights and just taking part in the main story might see you short changed this is why the game allows you to take part in skirmishes on old maps giving you a less risky way to build up EXP and DCT. The story is a nice, semi-whimsical take on World War II in another dimension, with characters being reunited with old friends, deserters, defectors, and maniacal megalomaniacs but with a tropey JRPG vibe to it. You have your uninteresting stoic lead, your hot headed jackass, the tomboy and, yes, a fashionista. If you’ve read a manga serialisation or watched an anime you’ll have a pretty good idea of how their interactions unfold, with there being some rather…uncomfortable…moments to witness, it’s not so far out there from typical Japanese fare, but in terms of storytelling it does feel like a considerable step backwards that we keep leaning so heavily on regularly used character types.

That being said there’s a lot of story here for you to take in and you’re rewarded with more for rotating your squad frequently. Using certain units with others who they favour will unlock missions that give you more info on those characters, letting you in on their interests and their relationships with their squadmates. The more you use different units the more story you’ll get to experience, it really is a case of that you get out what you put in. That being said, the conditions for these missions do tend to be more stringent than the regular story ones, so keeping your cool and meticulously planning your moves is vital. Sometimes best laid plans do go awry, and mine frequently involved my tanks. That glowing engine on their arses is a massive bullseye for anything that fires a shell, and making sure it’s always pointing away from enemies is easier said than done when the tanks control as badly as these do. Seriously, the amount of Action Points I’ve wasted trying to get a tank to pivot the way I need it to, only to have that obvious area sticking out like a baboon’s rump are too numerous to mention. I think I lost two soldiers and the APC on that mission I mentioned at the start because they were on board the damn thing and got their butt taken out. It’s not always obvious what these units can and can’t traverse over as well so making sure you navigate with caution despite the security offered by armour plating is advised.

I still really like Valkyria Chronicles IV, it’s silly at times, incredibly tropey and more backwards thinking than it should be, but it’s quirky take on the strategy RPG is very good providing you can bring yourself to not control your units as if you’re playing a third person action game. I do think the characters lack a bit in terms of their design, but when you’re in the military a uniform appearance is generally the norm, so maybe that can be forgiven. At times this game is beautiful, compelling but also silly and I think that more than merits giving it a go.