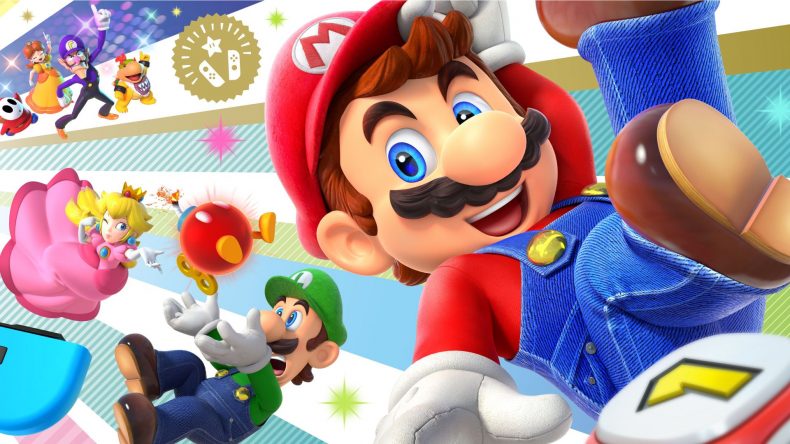 Saying “the best Mario Party” ever is a really low bar to hit. I mean, the Mario Party games are enjoyable to start but the fun wanes so quickly. Not being one to give up, Mario now brings his style of party to the Nintendo Switch with a whole slew of brand new minigames to make use of a multi-JoyCon setup and the whole waggle thing that became so popular with the Wii; it looks like they may have finally cracked it with this latest entry.

For starters this is like a new beginning for the series, twenty years of being know as Mario Party Nintendo have finally seen fit to brand this with the Super prefix and incorporated elements from the whole series. From the off Nintendo has ditched the point A to point B linear journey that has characterised the series of late and instead gone with the Star Chase format it started with all those years ago. While this mode can feel unfair on open boards like King Bob-omb’s Powderkeg Mine, it makes for a fun, fraught chase on linear maps such as Megafruit Paradise and Whomp’s Domino Ruins.

For the uninitiated, a Star Chase sees players competing to get coins from certain squares on the board or from minigames, you then use these to purchase stars from Toadette. You roll a dice to determine how far you move, just like a board game. Each character comes with one regular dice or you can use a dice that’s specific to them, each with upsides and downsides. Daisy (for instance) can guarantee you roll either a three or a four, while Bowser can roll as high as ten but has a two in six chance of losing you coins, so there’s now a tactical element in choosing your character instead of just because you like Waluigi. Anyway, once Toadette has sold you a Star she then moves to somewhere else on the board, this is where this mode can feel unfair. The chase across an open board gives you more to think about rather than just moving straight to Toadette, especially when just as you’re closing in that you’re beaten to it and she moves far away from you and closer to someone else – and it happens a lot. Where the linear boards feel fairer is that just by passing the squares for Toadette gives you an opportunity to purchase a star, similarly with Wiggler’s shop and the present area where you get a chance to have Lakitu steal coins from a rival (or a star if you’re evil and rolling in coins), on open boards you have to land on squares to get anything from them. The open boards also don’t have shops to purchase specific power-ups from leaving you at the mercy of RNG should you land on an item square. Just this slight change in how the boards work feels significant in creating a much more competitive and more fun experience for all involved.

It’s really in the minigames where Mario Party games tend to shine though, here they’re all introduced with a brilliant interactive tutorial that shows you what to do and allows you to have a go at doing it. Thanks to the return of the waggle we gain a wide range of different game types at the expense of the Switch’s main USP, portability. There’s a large set of games here that don’t make use of the Joycon motion detectors, but unfortunately there’s no option to just play using those, the game mixes between the game formats frequently, this means that while you can play round a friend’s house, or with mates down the pub, it’s highly unlikely you’ll be having a solo session on a commute. There are several types of minigames separated down into categories such as rhythm, free-for-all, team, or one vs three, and while there’s a lot to like, there are also some duffers. The over the top zealousness instilled with Trike Harder and Social Climbers (big no-nos on public transport) to games of unimaginable luck like Sizzling Stakes and Rumble Fishing. Even the one vs three games are a lot of fun for everyone with the person on their own being given a tool that evens the odds considerably. But for all the slapstick brilliance of Slaparazzi you get something that controls incredibly poorly like Barrelling Along, which will often see the game not recognise how you’re rotating the controller to move your barrel down the path.

It’s obvious Nintendo wanted to make co-op play a feature in this Mario Party title, with team takes on the board game style and even a river rafting challenge to take part in, both of which encourage you to celebrate with your partner(s) when you complete challenges successfully. River Survival is especially fun, with each person needing to control their side of the raft to maintain good speed and a decent course, picking up minigame balloons and working together to overcome challenges as fast as possible to increase the time allowance to complete the course. Along the way the route will fork several times giving you a choice between routes that look either incredibly boring or incredibly fun, and when you take these forks the four rafters look to each other and clap their oars together, it’s a lovely touch to bring out real camaraderie. The thing is, Nintendo hasn’t stopped there. You can play the minigames one at a time, or in a Mariothon (geddit?) where the person with the most minigame wins will finish at the top of the pile. There’s also another mode called Square Off where you play for territory on a board, claiming squares through winning games. Sandwiching a rival’s square between two of your own will see that square turned to your colour, It’s an interesting way of mixing up the play styles instead of just board games. You can even take your minigame skills online and test yourself against others all over the world in an online Mariothon if you’re so inclined.

But, believe it or not, it goes further still. There’s a Sound Stage mode where you’ll need to stand up and perform motions to the rhythm to accumulate points over a series of games, and then Toad’s Rec Room provides a series of toys for you to indulge in. It’s here you’ll find series staple Mini League Baseball, but also where you’ll find the games that can use more than one Switch, like Shell Shocked Deluxe or the two system only Banana, Split. Needless to say there’s plenty here to help keep the fun from wearing out as it often has done with past titles, and yet, and yet, there’s still more hidden in the background, unlocked as you play more and more.

All of this is contained in a cute little hub world with the individual modes accessed by a series of monitors staffed by Toads or pipes off to the sides, and it’s presented in Nintendo’s gloriously bright colours. As I said in my Captain Toad review, there’s a sense of heft to Nintendo’s design, everything just feels solid, like you can reach out and touch it, and they’ve brought that philosophy to Super Mario Party. It really does feel like this is a complete Mario Party package for a change, and it’s great to see. I just wish that it allowed more than four players. That’s it you see, four players only, it doesn’t matter what mode you play you have to have four to be able to indulge in the pleasures the game wants to give you. If you don’t have four then the remaining spaces are taken up by AIs, and don’t get me wrong, they’re good AIs, but it’s always better when you can gloat at people rather than lord it over people who can’t react. If you want more than four players I guess you could indulge in a spot of controller passing, but it still feels like this is a missed opportunity to break with tradition and expand the Mario Party formula to more players.

Let’s take heart though that this is a damn fine game. I’ve had my differences with Mario Party before in the past and I’ve been let down considerably, but for once I am pleasantly surprised that this one is actually really good. With the sheer quantity of minigames on offer not every one of them was going to be great, but the majority of them won’t fail to conjure up a competitive spirit in even the most placid people, and simple, intuitive controls mean that basically anyone can pick up and play it, especially with those handy tutorials. This is a Mario Party that more than deserves that ‘Super’ prefix that’s been coming for so long, and that’s rather amazing.

Gloriously colourful
Plenty for all to do
Frantic friendly fun

Twenty years in the making this Mario Party is indeed Super.