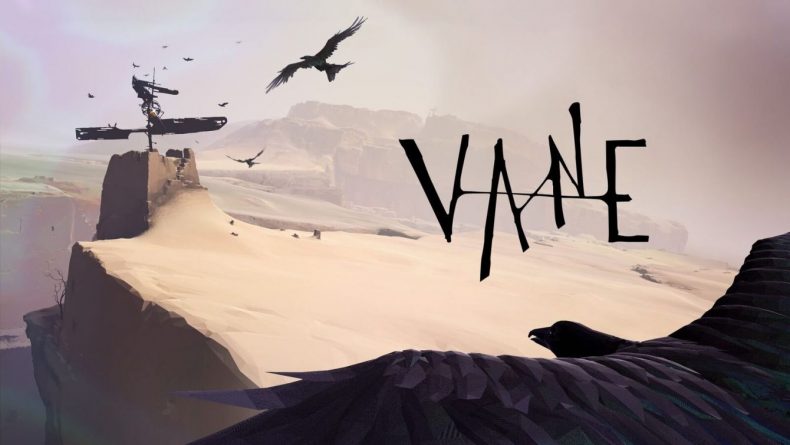 First impressions are important, I think we can all agree. But Vane has left me considering the negative side-effects of making a good first impression. Because after initially impressing, the standard soon slips and there’s a danger that the gulf in quality can be exacerbated due to the lofty expectations established from the outset. You’re essentially setting yourself up for failure. A fall from grace akin to a beautiful bird flying serenely through a gorgeous world before plummeting awkwardly through the sky and shamefully missing its landing target, say. Yes, Vane is the ultimate good first impression, on multiple occasions piquing your interest with a new idea or setting, before managing without fail to lower the standard through a wealth of bad design choices and frustrating gameplay moments.

Even during the game’s prologue that sets up some sort of terrible cataclysm that you’re trying to escape from, it manages to disappoint. The combination of dark foreboding setting and rousing score akin to something from Stranger Things succeeds in ramping up the heartbeat and level of engagement, but after a few moments the combination of the slow movement speed and an empty landscape make the goal of limping to your destination take just that little bit too long, and ensure it passes without consequence, and you won’t have any lasting memory of it. A move to the game proper now sees you – for inexplicable reasons – take control of a bird, and when it first takes flight your expectations rise with your altitude. A beautiful world spreads out before you, and full 360-degree control means it’s yours for the discovering. An oasis glistens in the distance and you fly towards it, looking forward to what awaits you in this desolate but gorgeous world. You discover a windsock which, once activated, causes other birds you to take flight with you, and the direction of the windsock guides you to another. Further wind-socking and bird-herding brings you to the titular Vane that you can land on, and you soon become aware that you don’t have enough of a bird posse to achieve your goal. Realisation dawns that you need to go out exploring the wilderness for more windsocks, and as you do, you also begin to understand that Vane is not prepared to hold your hand, and also that said wilderness is very sparse and empty, not unlike that first prologue level. Then there’s that niggle that knowing what you need to do and then doing it is going to take just a little bit longer than is enjoyable. Are you starting to see a theme?

As a specific genre it’s difficult to pigeonhole Vane, as it’s an exploratory puzzle game with platforming elements, that’s split into different chapters that encourage different types of gameplay. You also transfer between the bird and a boy character to progress through a foreboding but relatively threadbare background story. It’s this mesh of ideas that is its ultimate downfall as it strives to be a jack of all trades, and doesn’t master any of them. With its decision to have four chapters, and deciding to embrace one or two gameplay mechanics in each and then never again, it removes any feeling of progression or character development. But also because those sections only deal with one or two ideas, their execution feels laboured and stretched too thin after a while, and so whilst Vane is relatively short, each chapter ironically feels too long, and time drags despite not much of it passing. Other choices combine to worsen the situation further. Firstly, with it only saving at the end of each chapter, you could find yourself in the unfortunate position of having to laboriously repeat almost an entire chapter that already feels too long and monotonous. This coupled with a camera that at time feels possessed could see you easily plummet to your death, causing a restart through no fault of your own, and that slow trek back to your point of death is incredibly frustrating. And all the while it seems the developers are fascinated with making the terrain wobble like crusty jelly, presumably for some sort of effect that’s linked to the story it seems too scared to tell in any meaningful way, leaving the narrative as much open to interpretation as the next puzzle.

And all of this is a shame, a missed opportunity, because in here are moments that I genuinely enjoyed. The music and settings establish things well, and the puzzles and platforming in the second chapter were enjoyable – by far the strongest in the game. But other chapters just laboured their puzzles for far too long, often with me longing for the loading screen that signalled the end of the chapter and a save point. The ideas here were actually pretty good in isolation, if they’d been used for shorter puzzles, and maybe in more ways throughout play – the exception being the last chapter that plays like a game of Minecraft that has been hacked beyond your control.

So simply put, Vane is one to avoid. It’s a title that unfortunately puts initial style over any lasting substance, and proves that appearances can be deceiving. With this setting and these ideas, it should be executed better and be more fun to experience. It’s a title that, despite its short playtime, manages to outstay its welcome, and ends without any sort of real gameplay crescendo or story culmination of note. Sadly, Vane doesn’t leave any lasting impression, aside from the frustration that will build up if you do decide to take the plunge.

Nice to look at
Atmospheric music
Some good ideas

Vane has some good ideas, but in stretching them out for too long across a pretty empty world, it soon becomes tiresome and frustrating.