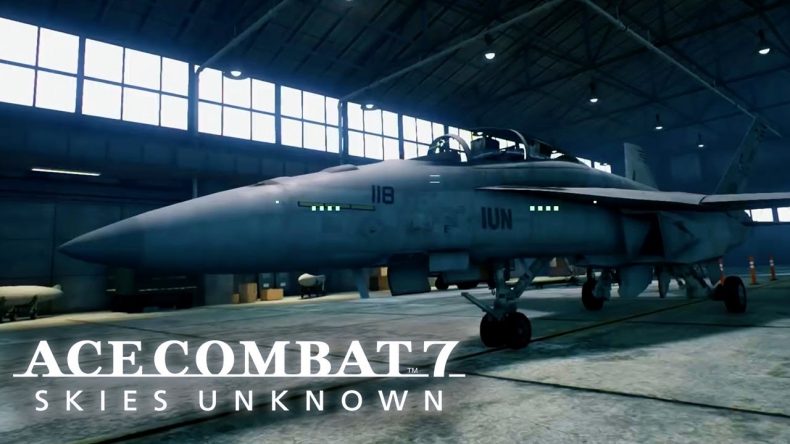 I’m not much of a driver. I mean, I passed my test, I know the laws of the road, I understand what the different lights indicate, but I highly doubt I could hold my own in, say, a high speed chase or a demolition derby. By extension, I tend to suck at driving in games, mowing through pedestrians and taking out lampposts with reckless abandon. Given that flying a plane is generally on a slightly higher level than driving a car, I expected to really struggle with Ace Combat 7. It’s much more of a testament to the game than to my skills that, in fact, I fell head over heels in love with it.

I should point out that Skies Unknown is not my first contact with Namco’s aerial combat series, but the last one I played was Ace Combat 5 nearly 15 years ago. This latest edition is suffixed as 7 but is actually number 17 in a franchise almost 28 years old. Its safe to say that, by now, Namco Bandai and Project Aces know what they’re doing.

Once again we’re thrust into the centre of the war between the Osean Federation and the Kingdom of Erusea, a pair of huge nations that occupy much of Ace Combat’s fictional but allegorical world. The plot is narrated by two characters, a scrappy civilian mechanic named Avril Mead who fixes up planes in an Osean military prison that doubles as a secret airbase, and one of the Erusean scientists in charge of an ethically-questionable initiative to develop AI drones using an ageing human pilot as a kind of template. Your character is known as Trigger, which being British I found difficult to fully appreciate as I kept referring to him as Trig in my best Delboy Trotter voice. As the game opens he’s a promising young pilot in an elite squadron, but after taking the rap for a high profile cock-up he’s sent to the Osean penal camp where he meets Avril and is rostered into the Spares, a squad of misfit convict pilots. After surviving several challenging missions, Trigger and the remaining Spares slowly begin to regain their former honour. As stories go, it’s decent. Some of the writing misses the mark, and the banter between your various squadrons can occasionally feel forced, but on the whole I was fairly invested throughout.

Actually, I’m probably being unfair here. It must be difficult for a game that takes place entirely in a plane to properly convey dramatic atmosphere. It’s easy to raise the stakes by making everyone shout and say things like “We’ve only got one shot at this, kid,” but by the halfway point I was all-in for Trigger, Avril and Count (Trigger’s snarky wingman). It’s not Oscar-worthy stuff, but the story was enough to pull me in, and the characters were just enough to anchor me for the duration.

Let’s be honest though, no one signed up for the storytelling. We signed up to fly approximations of real-world fighter jets at dangerous speeds, daisy-cutting trees and defying the laws of gravity at every possible juncture. The flying, as we’ve come to expect, is excellent. The planes are super easy to handle and manoeuvre, even if the missile designations are hard to get your head around (I still struggle to tell my LAAM from my GBP, but WGaF, right?). Mission variety in Ace Combat 7 is comfortably the best I’ve seen in an aerial combat sim, with escort missions (usually the staple filler) only rotating in twice or thrice throughout 20 missions. Instead you’ll fly offensives to wipe out ground forces and clear the way for an allied assault, you’ll swoop low under searchlights in the belly of a twilight canyon, take out escaping trucks while attempting to navigate a zero-visibility sandstorm, and defend your squadron from a superior enemy in the midst of a fricking lightning storm. Once or twice, a giant enemy called an Arsenal Bird will show up and unleash a swarm of drones like it’s Independence Day. You never know what’s coming mission to mission, and most are two or three-stage affairs that switch up enemies, conditions or objectives at checkpointed intervals.

Series fans will already be expecting a solid challenge, but newcomers may find the occasional difficulty spikes in Skies Unknown a hindrance. Quite often you’ll need to rely on the AI to not get shot down, or you’ll be battling weather conditions way more than enemy planes. I should point out that having dynamic, tactile clouds makes a major difference, as water droplets splash against your screen and visibility drops to dangerous levels. My favourite mission type is Annihilation, where every enemy unit is assigned a points value and you need to get a high enough score within a tight time limit to advance to the next stage of the mission. Despite it always being fun, I did have to click “retry from checkpoint” more times than I care to remember. In fact, mission length will be heavily dependant on your abilities, since I spent upwards of an hour on one mission because I just kept failing. It speaks volumes that I never once wanted to quit.

Unusually for its genre, Ace Combat 7: Skies Unknown is a game that thrives on moments: the first time an Arsenal Bird unleashes its payload, the feeling of satisfaction when you finally launch a counter-offensive and take one down, or swooping through desert canyons on a do-or-die bombing mission that evokes memories of A New Hope’s trench run. But more than that, it’s a game that isn’t afraid to let the player do all the cool stuff, like narrowly avoiding a ground collision to get that final rocket off, or slamming on the brakes and risking a stall from 2000 metres just to let the enemy fly right by, Maverick-style. My playthrough was littered with little moments that had me wowing under my breath or swearing out loud. There are times when it frustrated me like few games before it, but perseverance always saw me through. For the sake of full disclosure, I was playing on Easy. Yes, I am a noob. When missions end you’re invited to watch full replays with multiple angles, or view a complete breakdown of your movements via a 3D tactical map as the game calculates your rank from S to D. You’re also able to visit the Aircraft Tree, a sprawling RPG-like skill tree where you spend XP (or the equivalent, called MRP) to unlock dozens of planes, special weapons and upgrades. Each plane has a choice of 3 special weapons which include guided missiles, rocket barrages, direct energy weapons, bombs, sidewinders, and tank busters, but aside from a few specific missions you can’t change a loadout after take-off, so choose wisely. Likewise, each fighter has a class, and a number of slots for upgrades that boost everything from missile reload and capacity to damage mitigation, acceleration speed, and handling. The more you spend, the better the upgrade or plane you can unlock, and replaying missions multiple times allows you to grind for more MRP.

Although the multiplayer mode was unavailable prior to launch, the VR mode was fully functional. I’m going to be honest here: Ace Combat 7’s VR mode is worth the price of the headset on its own. It has specific standalone missions designed just for this mode, and each one is an exercise in awesome. Leaning over to the side of your cockpit to see an island far below, watching the sun reflect from the sea, or angling your plane between narrow rises of sheer rock is exhilarating enough, but combat in VR is out of this world. Getting caught in a stall and spiralling towards the ground, only to save it at the last second to blast back up and rejoin the fight in the big blue, or breaking hard to get behind the bastard who’s been shooting at you for the last five minutes to finally blow him out of the sky… These are feelings I’ve never experienced in gaming before, because it’s completely different in VR. I can only imagine how cool it would feel to play in VR with, say, a HOTAS flightstick. Admittedly, graphical fidelity has taken a hit in this mode in order to maintain 60fps, and yes I did eventually have to stop before the inertia hit me, but honestly, if you have access to VR, this mode is absolutely worth checking out. In an industry bursting with Souls-likes, shooters, and open world action-RPGs, Ace Combat 7 is, at least on consoles, in a league of its own. There’s a confidence here that makes up for a hell of a lot, balancing out shortcomings in the story and the difficulty with gameplay of such high quality that the little niggles matter less. If you examine the world up close you’ll find cracks; the environmental detail isn’t high, for example – but then you’re whipping by the environment at the speed of sound, so does it matter? The AI is a little stupid, but that just makes you feel like the hero. The difficulty spikes erratically, but when you overcome each challenge you feel immense satisfaction.

If flight sims aren’t your thing, then nothing I say and nothing Project Aces have done will change your mind. But if you’re a fan of the series or genre, Ace Combat 7 is a fantastic experience. I’m still looking forward to trying the multiplayer (which sadly isn’t available in VR), but as it stands, the campaign is an instant classic as far as I’m concerned. Exceptional.

Ace Combat 7 is a hugely satisfying, even empowering, experience that's taken to the next level in VR