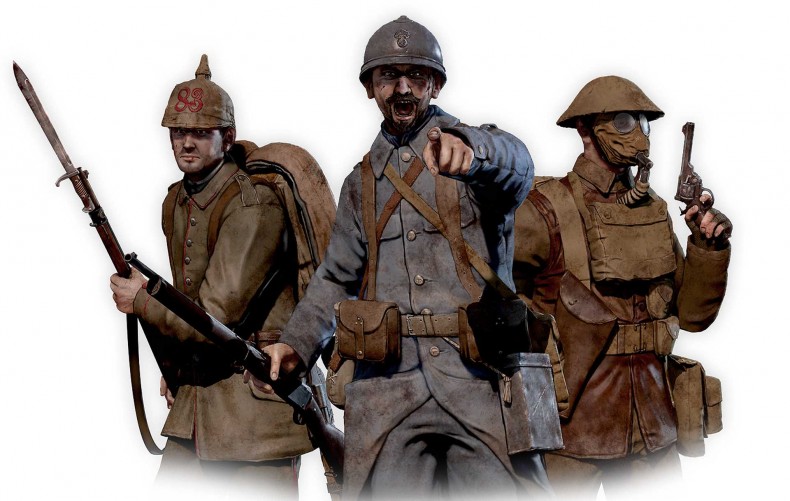 If anything highlights the gulf between PC gamers and conole gamers, it’s either a really, really expensive blockbuster, or a little budget title. The former because PC players get to gloat about textures and lighting effects, and the latter because those same people are surprisingly kind to indies. Certainly kinder than console gamers, anyway.

Which is not to say that console gamers are mean, but it really depends on the title in question. Take Verdun, for example, a tactical WW1 “shooter simulator” that was released on Steam to some decent feedback, but which has the erroneous “honour” of hitting consoles in the same quarter as Battlefield 1. Factor in that console gamers as a very general rule tend to be more likely to hoover up AAAs than indies, and then factor in that there are very, very few console shooters that don’t follow a fairly rigid template, and Verdun is stepping off the boat into a hail of turret fire.

I may be rather ignorantly mixing my wars there, but thankfully the developers of Verdun don’t. They’ve recreated some of the worst hell-holes of the Great War and dropped you feet-first into the mud and blood. From the outside, it’s a solid concept: it’s far from the Hollywood-ised image of war usually depicted in videogames, and the one-hit-kills and claustrophobic environments make for some incredibly tense moments. The problem is that they are far between, and what lies betwixt them is often dull. You’re able to select from one of four classes, including Sapper and Medic, and you’ll be assigned to a squad of four soldiers depending on your choice. The objective is then to follow your orders and complete the parameters established by the game-type. Frontlines, for example, sees you attempting to push through the trenches, force back the advancing enemies and eventually gain ground to turn the tide. There are other modes, including a more traditional deathmatch, but on the whole the objectives remain pretty similar: keep your NCO alive and follow your orders.

Sadly, Verdun is severely hamstrung by its production values. It’s aesthetically poor in almost every way, and has seen no graphical upgrades in the PC to console port. The trenches were hardly bright, colourful places, but the environments here are incredibly drab and low-detailed. The character models are also ropey, while the animation leaves much to be desired. Add to that some horrendous tearing and slow-down, and Verdun really struggles to earn its place on current consoles.

Thankfully, the gameplay does have its moments. Running around the trenches and across the featureless fields does little to ignite the imagination, but when you’re up close and personal with the enemy, few shooters provide the same level of breathless fear. Guns are inaccurate and unwieldy, and the sluggish character movement makes you feel as though you really are mired in mud. I’d like to think it’s deliberate, because staring at two oncoming enemies while trying to bring your rifle to bear before they can end you is tense every single time. Sticking together and coordinating with your squad is the way to get the most from Verdun. Alone, it’s frequently infuriating as you battle technical issues more than you battle the Hun, and single shots kill you before you even know you’re spotted. Telling enemy from ally is often hard, too, but at least if you’re with friends you’ll know where they are. Maybe. Levelling up unlocks new weapons for your loadout or upgrades the ones you have, so there’s XP to chase if that’s your bag, but it might not be enough to excuse the other issues – depending of course, on what you look for in a shooter.

You have to give the devs a certain amount of respect for throwing their hat into this particular ring, but it’s a risk unlikely to pay real dividends when the big-hitters join in. The subject is one rarely tackled, and the tense horror of trench warfare and frantic one-shot encounters occasionally elevate the action considerably, but an abundance of performance problems and sub-par presentation render Verdun something of a mess.

Works better with friends
Trench combat is tense and frantic

A brave attempt at creating a more thoughtful shooter hindered by poor execution and messy technique.