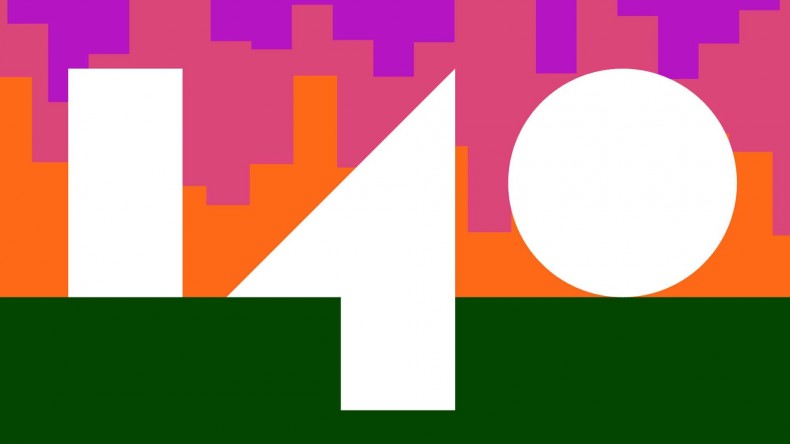 Sometimes you play a game that makes you realise that you are woefully out of your depth, that the skills required to perform the actions are simply not ones that you possess, and yet you still find yourself battling on because there is “something” there that makes you want to get better. 140 is precisely that sort of game, a 2D, side scrolling platformer from Jeppe Carlsen, the lead gameplay designer for Limbo.

Your avatar is a geometric shape that morphs into a triangle when you jump, becomes a circle when you move and transforms into a square when you are stationary. Controls are simple, you move left and you move right, occasionally you jump, often you will fall, and when you do, you explode in a crescendo of white noise and images. When things are going slightly better you are treated to monochromatic, psychedelic backgrounds that jump and fizz in time with the pumping electronic soundtrack.

Everything is minimalist. There are no instructions on how to play or what you are required to do; everything is introduced to you as you explore. You move your avatar around the environment trying to find balls of colour that act as a key to return to a repository of sorts, or a door. Upon doing so, the screen will explode with the colours of the item you have returned and the background will change to reflect the new palette. The structure of the environment doesn’t change, but with each new level, areas you couldn’t access before become available. Death, or the white noise, comes regularly as there are moving platforms that disappear and reappear in time with the beats of the music, which act as a kind of metronome for the action. Platforming then becomes a feeling, jumping in time with the beats and flourishes. As the levels become more difficult, the music becomes more complex and more layered and it is here that I began to struggle. I am not musically gifted and my ability to take in aural instruction is growing weaker as I get older, and so later stages of 140 became crushingly difficult. The simplicity of the design and the beautiful way it introduces the mechanics to succeed, however, makes it a game I wanted to get better at. I wanted to learn the pattern of the disappearing and re-appearing platforms, to find the rhythm in the music and make progress.

At the end of each level (three in total) you are presented with a boss battle, and all the mechanics you have learned up to this point come in to play. Boss battles are reminiscent of old school arcade shooters like Space Invaders, and change the way you play entirely. Now you need to incorporate spatial awareness as you jump, and avoid the geometric “bullets” of the boss. Timing is everything, not only to avoid death, but to line up your weapon that phases in and out in time with the heavy synths of the soundtrack. The process is curiously frustrating, but satisfying at the same time, as the battle becomes an exercise in feeling your way to victory through the combination of aural and visual inputs. Once you complete all three levels and defeat the bosses you unlock a Hardcore mode that will truly challenge all you have learned. It’s a one-life-only affair that will return you immediately to the main menu should you fail at any point. It’s aggravating, and will really only appeal to the musical and mathematical savants or the eternally masochistic players who revel in a challenge.

Clocking in at around an hour’s worth of play, depending on your skill of course, 140 is a cold and mathematical, yet beautiful, sensory platforming experience. There is no story, only movement that leads to success or failure. It is a game that is simple in its purest form, from the monochromatic visuals to the simple geometry of your avatar, to the beats of the soundtrack. It won’t appeal to everyone, but for those who excel in spatial and aural awareness, 140 isn’t a bad way to spend an hour.

Review code provided by Double Fine.
Liked it? Take a second to support GodisaGeek.com on Patreon!

140 is a cold, mathematical yet beautiful and sensory platforming experience with a pulsing synthetic soundtrack and reflexive movement.