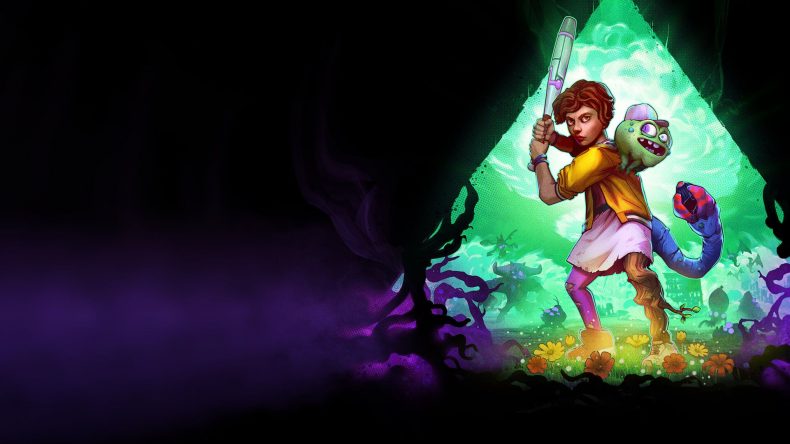 We’ve come to expect unique titles from Double Fine, famous as they are for taking existing genres and putting their own spin on them, and Rad is no different. It’s a roguelike, and whilst it has all the hallmarks of games like Dead Cells and Rogue Legacy, it presents them with grace and style. Set in a post-apocalypse that has gone through the end of the world twice, Rad is an 80s homage draped in neon, filled with beautiful visuals and constantly evolving levels. Rad’s addictive gameplay loop begs you to keep playing.

For saying the world is an irradiated wasteland, it’s a rather beautiful dystopia filled with colourful levels doused in bright greens and pinks, along with a palette that is pleasing on the eyes. As you make your way through the isometric levels, you’ll come across enemies that do a fantastic job of kicking your arse time and time again. In the beginning you’ll often find that your limited moveset leads to a fair amount of deaths, but fight through the difficulty and you’re blessed with a satisfying range of mutations that soon help to level the playing field. Wandering around and coming into contact with various enemies causes a bar at the top of the screen to fill up, making you become more radiated with every victory, and when it fills up you gain a unique power that changes all the time. Permadeath results in you having to start all the way at the beginning, so when you have to fill up that bar all over again the results are different every time. You may get a glowing head that can be thrown like a bomb, an arm that can become a purple boomerang, or a pair of wings that’ll allow you to fly for a little bit, and with every one you’re approach changes.

Each new mutation makes you that bit more powerful, and you can also gain more speed to help you move around the levels easier. You start with a baseball bat which you can swing at enemies, and also an ability to ‘ground pound,’ but until your first mutation you’d be forgiven for thinking Rad is pretty underwhelming. It’s already tough, and without a nice array of powers you’re pitched against the odds from the offset. But that moment of realisation is incredibly satisfying. You’re no longer struggling against a group of enemies – you’ve got a fighting chance – and this is when Rad is at its most addictive. You collect cassette tapes that can be used to buy yourself energy drinks that provide you health, and also new mutations that once again make you more of a threat, but if you die they all die with you. Thankfully, you can return to the hub world to store them in your own personal bank so that if you do shuffle off this mortal coil, the next teenager you play as can pick them up and buy something fancy before re-entering the Fallow – the name given to the beautiful end of the world setting you’re compelled to keep revisiting.

Due to its procedurally-generated levels and random mutation patterns, no two playthroughs are the same, however, there is some structure to it. You must activate towers that vomit beautiful plantlife onto the map, and once done you’ll move onto a boss fight. They can become harder the further you get, but as long as you adapt to their patterns of movement and attacks, you’ll be OK. The Binding of Isaac was successful at making roguelikes fun to play, and Rad has that similar reward, despite it being rather tough at times.

You can take a breather from the intense battles often fought above ground in the underground tunnels. In these tunnels you’ll find shops where you can buy items to aid your cause, and they’ll also lead you to new sections of the map. They’re not as pretty as the wasteland, but the break is appreciated. Of course, there are some vendors outside the tunnels, but you can also find more mutations down there.

Rad is a fun roguelike that rewards each risk you take, and makes you constantly evolve with new mutations to aid you in the fight to save mankind. The music is wonderful, offering melodies that remind you of popular 80s songs, and the game’s design is gorgeous. It’s massively frustrating when you die, but when the only thing you want to do is dive back into Rad’s addictive gameplay after suffering yet another death, you know you’ve got a great game on your hands.

Difficulty can grate on you
Tunnel sections aren't as fun

Rad is a great roguelike that constantly evolves to give you plenty of options the more you play, with unique mutations and a different world to explore on each playthrough.