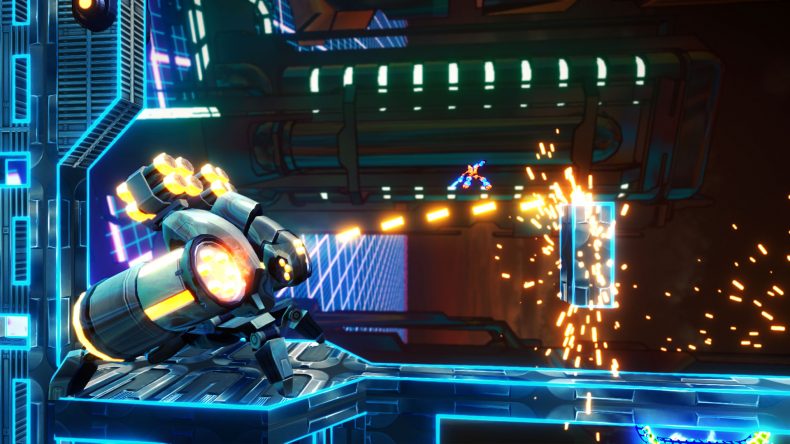 You ever wonder what life would be like in your computer if all those processes and applications were alive? If all those transistors and processors actually had day jobs they attended, worries, hobbies and friends? No? Me neither. But the premise behind Exception Is just that – well, until everything is ruined after the elderly lady that owns said PC unwittingly unleashes a virus on her denizens, and now it’s up to you as a lucky Thread to liberate control of the machine from the virus called Titan.

You then are the Exception of the game’s title, a Thread fortunate enough to have escaped the devastation that the virus wrought, and now find yourself imbued with the ability to run, jump and slash your way through former friends to take down Titan and re-take your world. This is played out in an N++ style twitch platformer where speed is of the essence but sticking your landings is more important, and it is hard to stick those landings due to a rather floaty jump that can be difficult to pinpoint when you’re trying to move under duress.

It’s really quite cool how the levels are introduced, the camera swoops in as the level builds itself as an 80s soundtrack breathes into life, I’ll tell you what, all my nostalgia buttons were hit. From here it’s an obstacle course of platforms, walls, pitfalls and enemies; you’ll leap and somersault through the air dealing death to anything that gets in your way as you aim to get to the nodes in the level. Hitting these reformats the level, spinning everything around and creating a new path for you to head down. It’s still a linear trek to the level’s end, but damn it does look cool. There’s an extra layer to this aesthetic too, and it’s tied in to how the game communicates your health to you. There’s no on-screen UI here, and you’re only able to take three hits before expiring, and the game shows you this through how it renders the action. The first hit you take pixelates the background, while the second pixelates it further but this time pixelating all the foreground action too, including the player character, the funny thing is that I didn’t really notice, until my son pointed it out. It’s a subtle but effective visual trick and does away with overused UI elements.

The game wants you to explore each level for secret walls and tunnels that lead to hidden ‘bytes’, which are used to empower your abilities. A bit of experimentation is all that’s required to spot these areas, and while it may slow down your overall completion time, it’s still worth exploring. I do believe that you can finish this without upgrading any of the abilities really, which then sets the game up for its true calling as a speed-running exercise, and I look forward to seeing this on GDQ at some point in the near future with a real skilled player in control.

Another good trick is the music, as it never lets up. Each time a song ends another one starts right away, and half the time you wouldn’t notice apart from the song title and artist being displayed in the corner of the screen. This helps cement the idea that the game is supposed to move quickly with little in the way of distractions – heck, when you unlock the story chapters you’re given the opportunity to skip them for later just so you can keep on carrying on. This really is a game that wants you to play it quickly. It’s unfortunate, then, that the game, while rewarding you for playing with its toolset in regards to the bytes and possible shortcuts (I found one and got a bypass achievement for it), doesn’t like it at times when you go in the wrong direction. Frequently I was hit with game crashes which required different means to work around. One crash basically had me stop and take a different way around; another made me force-quit the game and re-load to get by. Eventually though it all came to a head where no matter what I did, I just couldn’t get through a particular level at all. You could say that these crashes are a meta experience considering the theme of the game, but that’s trying to put a positive spin on an otherwise bad time.

It’s sad that, despite Exception being pretty good, I cannot recommend it based on how often it crashed, and the fact that these same crashes are what stopped me from completing it. All things considered I probably should rate this game lower but even now I’m humming the music in my head. I really did love this game and for what it’s worth I got a lot of enjoyment out of it, but the fact is that enjoyment is cut short in the most disappointing way. The other versions of the game might be ok, and that’s probably something they may update after release, what with post release patches and what-not, but the fact of the matter is that I just cannot recommend this version as it is.

Exception almost wound up being exceptional, but unfortunately is broken enough to warrant steering clear of until things are fixed