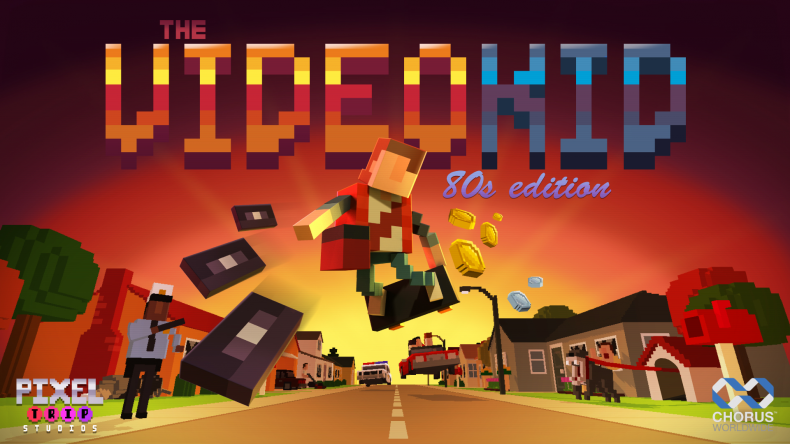 The 80s were a pretty great decade.

We had the best TV shows, the rebirth of the games console with the launch of the NES and the Master System, some kick ass music, and most importantly, I was born. Most people my age – those clinging on the to the upper age bracket of the millennial group – more than likely have some fond memories of the 1980s. And that’s lucky because if you didn’t like the 80s, then VideoKid is definitely not for you.

So what is VideoKid? Well if I mention the Paperboy – an arcade hit launched back in 1985, with numerous home console releases since – chances are if you’re of a certain age you’ll know what I’m talking about. But if you don’t, the game is set in an isometric viewpoint, and you control the titular VideoKid, who to make some cash, has started a pirate video racket and spends his days skating through the neighbourhood delivering counterfeit VHS tapes to his customers, all whilst trying to avoid the police and traffic. The end goal being to meet up with his girlfriend Jennifer at the end of his route. So it’s an auto-scroller and your job is to deliver the videos by throwing them to your left, and hitting the red mailboxes. You can move VideoKid across 3 different lanes, the pavement, and then two road lanes, one containing forward traffic, and the other oncoming vehicles! So essentially the controls are basic, press left or right to change lanes, and then a button press to throw a video to your left. The only other control mechanic is a jump button which can be used to dodge certain obstacles if timed correctly.

So let’s finally talk about those obstacles. If you haven’t already guessed, this is set in the 1980s, and as everyone remembers you couldn’t move in that decade without pop culture references wandering the street getting in your way, especially if you were a Marty McFly look-a-like (although definitely not Marty McFly for copyright reasons!) and were trying to deliver videos. So yes, as you’re skating down the street you might have to navigate around Big Bird from Sesame Street or Lion-O from the Thundercats. You’ll see the Fraggles from Fraggle Rock chilling on a park bench or the Mystery Machine from Scooby Doo being chased by a ghost. In fact almost every single obstacle you meet is a reference to something from the 1980s, and I’ll admit to smiling at each one for the first time, making a timely acknowledgement as they sped onto the screen, and disappeared off the bottom of it almost as quickly, such is the pace. And if you hit one of these obstacles at any point, it’s game over, and you have to start over. By successfully delivering videos, and collecting the various money collectables dotted across the three lanes, you can earn money which is carried over across all of your runs as a cumulative amount. The money you collect can then be spent in the shop in between runs, and what’s on offer is largely cosmetic. You can buy different characters to race as on your skateboard (all with their names slightly changed of course) should you ever feel the need to race as The Joker from Batman. You can also unlock three different skateboard trick moves which you can perform, but again these serve no other purpose than slightly different animation on tricks as you grind along benches or jump on top of cars. Given the money carries over it would have been nice if you could have bought something that upgraded you in some way, to help it feel like you were progressing. But as it is, I found myself simply unlocking everything as I could afford it, with borderline apathy to what I was purchasing.

The VideoKid prides itself on being randomly generated, and this is true to an extent, you’ll get different experiences as you progress. However there are two main problems with this. Firstly there are various sections that are repeated no matter what, for example you will always have to traverse two sewer levels, and these are identical each time and so become trivial after a couple of playthroughs. Secondly the 80s reference obstacles are split into 3 or 4 sections, meaning in the first section you’ll see Paddington and Inspector Gadget more often than not, whereas you’ll need to progress much further to see, say, He-Man. And because it’s just one long level, you’ll see repeating patterns of obstacles on different playthroughs over and over again, to the point where it doesn’t really feel very random anymore. And it’s strange because the money mechanic encourages you to replay the game over and over, but this undermines the random nature of the design. And if it’s not very random, then all you really have is one samey level, that is over quite quickly. There’s a lot to love in VideoKid, but sadly what’s to love is the myriad of 80s pop culture references, all of which invoke happy memories from your childhood, and sadly most of these memories are more enjoyable than this. I did smile when I saw each of the references for the first time, but after a few attempts where you get close to the end of the level, you’ve kind of seen everything this it has to offer. The incentive to keep playing is purely cosmetic changes rather than progress, and that’s kind of it. Even purchasing all the upgrades can be done with a few hours play, and so sadly this feels a bit lacking. Sure it’s cheap, and for £3.99 many will argue that I shouldn’t expect too much, and there’s value to be had for a couple of hours, and they might be right. But when the Switch is awash with some great indie games at competitive prices, it’s hard to give this one a solid recommendation in the face of the competition.

It’s not terrible by any means, and I’ll admit to having a few of those “just one more try” moments, but after a time you realise there’s just not a lot on offer here once the 1980s is stripped away. If you fancy a nostalgia trip and are happy to while away several hours for the price, you could do a lot worse. Sadly though with it’s current library on Switch, you could probably do a bit better too.

It's just a single level
Gets repetitive
Lack of progression

The VideoKid clearly loves the 1980s, and it hopes you do too. But strip away the nostalgia and you're left with a pretty basic experience. Unless you REALLY enjoyed Paperboy, you're better off looking elsewhere.