previous
The VideoKid review
random
next
Bad North review
1 like 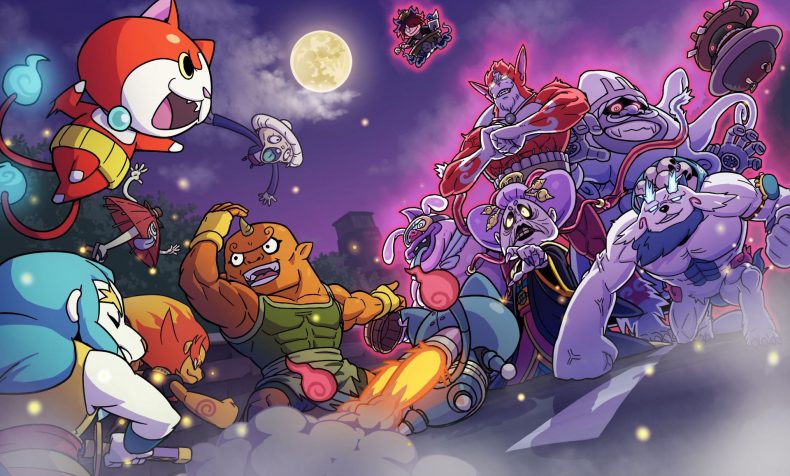 Like most people, I love Ghostbusters. The original films were great entertainment for me when I was growing up, I would watch The Real Ghostbusters religiously, I had some of the figures and I liked the reboot film as well. Yo-Kai Watch Blasters borrows some theme-based elements from the Ghostbusters franchise such as a fire station-like main base, an overly accessorised car complete with siren and a desire to put a stop to unruly supernatural entities, if only it had borrowed the sense of humour and ability to entertain.

Jibanyan and a plucky group of cowardly or downright lazy yo-kai are part of a group who are supposed to stand up to the dangerous spirits of the local area and keep the populace safe (kind of like a paranormal neighbourhood watch), the problem is, they’re really bad at it. Cue the appearance of series meathead Sgt. Burly to whip them into shape and turn them into a proper defence force. The game then follows the series’ usual episodic structure with missions being undertaken to complete a mini story which broadens over a complete arc. During missions you’ll fight Yo-Kai who will either drop items or Oni orbs. These orbs are the main currency of the game and allow you to buy items, level up characters, enhance equipment, and a bunch of other stuff. They have so many uses that the game has to give you multiple ways to farm the damn things because without a plentiful supply of them you’re really going to struggle. Level requirements go up quickly and the amount of orbs required to level up jump drastically, not to mention to sheer amount of them you need to buy halfway decent items. You’ll need to grind. A lot. And that just isn’t fun.

To do so you can replay old missions, or you can go on patrols. In patrols you just wander around taking out Yo-Kai and indulging in a spot of short term problem solving should an incident occur. The gains from patrols are incredibly inconsistent and as such it’s not really an effective way to gain orbs. A better method is the boss fight option which is unlocked later. This allows you to re-do boss fights you’ve already done, and then you can take on harder variants of them. Through this mode you can make much more considerable gains in a short period of time, but the boss fights, like the main action, just aren’t fun.

It’s bad enough that the actual action element of the game is basically you running around and pressing A constantly interspersed with the occasional X and sometimes a Y. You might have to use B a bit early on, but it comes into more use later when bosses get really damn hard and wipe out your AI compatriots pretty sharpish. When they’re knocked out you have a window of opportunity to revive them by standing over their prone body and holding the B button to watch a blue meter slowly feel, the wait is as boringly agonising as I’ve made it sound. It gets even worse when you realise you need to mash B to revive yourself should you bite the big one. And the AI will die a lot because it’s incredibly dumb. You’ll notice your partners will sometimes get out the way of AoE (Area of Effect) attacks, but will happily stand in great big damage dealing areas. There’s a later boss that regularly curses your team mates and it’s impossible to make them get out of the way, and shifting to remove a curse is a right royal pain. It’s obvious that the game is designed to be played in co-op with others, but the likelihood of only playing with other people is slim, so competent AI is necessary to play the game effectively.

There’s a whole raft of design frustrations here that it’s impossible to go through all of them but Yo-Kai Watch Blasters seems to exist to give Level-5 a reason to use the catalogue of environments and character models from the previous games again rather than create much in the way of anything new. You’ll fight Slimander, again, go back in time, again, go to the beach, again, it’s all so rote and by the numbers. Constant repetition works against the game due to the poor core gameplay loop, and most annoyingly the character soundbites which will have even the most hardened person gritting their teeth to the verge of shattering them.

With the next mainline Yo-Kai watch game coming to the Switch it’s unclear just if there’ll be another of this series coming to the 3DS, after Bony Spirits, Fleshy Souls, and Psychic Spectres, Blasters feels like a considerable misstep with a game style that just doesn’t feel like it lends itself favourably to the series. It just feels boring, repetitive and ultimately frustrating which is a shame if this is to be the series finale on 3DS.

It’s a shame but Yo-Kai watch Blasters could have been a good game, but it’s let down by a lack of variety in what it offers in itself and against its predecessors.