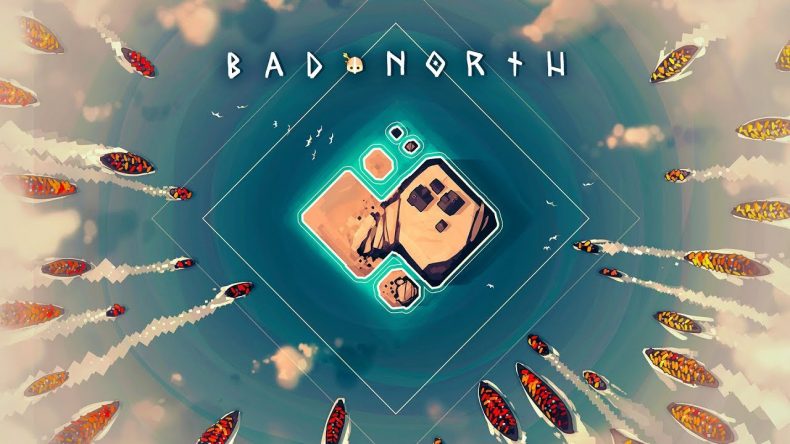 There’s something to be said for simplicity. Clean and uncluttered lines, with tight compact play, and nothing to distract or confuse from the main goal. Bad North has this in spades, it is a minimalist’s take on a real time strategy game, with all the complexities of the genre stripped away to its most basic elements, while still providing some challenge and use of tactics. There are no bases to build, just houses to defend with a simple but effective tool-set. Strip away too much though, reducing a complex game down to its most basic elements and you run the risk of creating something that struggles to find its place. Bad North is strategy game wrapped up in the familiarity of a more casual game and as such doesn’t completely manage to successfully bridge the gap between novices and veterans of the genre.

There isn’t much exposition to explain what you are doing in Bad North. Your sole task is to fend of waves of marauding Vikings who are sailing to your home to wreak havoc and destroy it. You achieve this by dictating where your troops should stand on the island achieved real time albeit with play slowed down, and battle is initiated as soon as the enemy gets close enough. The Viking’s task is to destroy each settlement on the island by lobbing fire bombs at them. Your success is measured by how many you have left standing at the end of the assault with failure occurring if the Vikings successfully manage to raze everything to the ground, at which point it is game over. You play across a sequence of tiny, procedurally generated islands. They are all beautifully drawn and visible via an isometric view which you can rotate fully to get an understanding of the topography and how best to utilise it. In the beginning you can only command one defensive unit, but successfully defend an island with an already stationed commander, and their troops will be absorbed into yours until you have a full team of four. There are three classes to choose from with your troops: the Archers are useful for attacking the Vikings before they even beach; the Pikemen for holding a stationary position, and the more mobile Infantry units are equipped with swords and shields and can attack on the move. Successfully defending an island rewards you with gold coins that you can distribute amongst your troops as you see fit and then spend them on upgrades to strengthen their attacks.

You choose your next island to defend via a map of interconnected nodes, which means you won’t be playing on every island available because after each turn a portion of the map becomes unavailable as your defensive front line moves forward. Along the course of your defensive campaign you will see islands that have question marks on them. These islands invariably hide a powerful item that you can apply to your defensive units to give them a unique skill such as a fire-bomb or a strong axe swing capable of knocking enemies over, a skill that then becomes something else you can spend your gold on upgrading. If your troops take damage during battle you can choose to replenish them by sending them to one of the houses stationed on the island, but it is a risky business as the healing takes time leaving your remaining troops a battalion down, and should the house you are restocking in be destroyed you will lose that battalion forever. It seems like everything has some rogue-like elements about them at the moment, and Bad North is no exception, albeit more of a rogue-lite. There is a kind of permadeath with a loss of one of your commanders in battle meaning they are lost forever, but upon total failure you will be sent right back to the beginning of the campaign with no previously acquired skills to give you a leg up. This total fail state has you repeating early things over and over on islands that, by design, don’t have a great deal to distinguish themselves. Furthermore, after several failed campaigns under my belt I started to notice that the difficulty levels don’t seem to ramp in a uniform or expected way, meaning that there is an element of RNG that does away with the idea you are playing a game based on strategy. For example, it is fairly straightforward to defend against a couple of waves of archers and infantry units on earlier islands if all you have to defend with is two battalions, but it’s much harder to do this with only one defensive unit because the game hasn’t as yet provided you a route through nodes of the map to another island with a stationed commander.

There is no denying that Bad North looks great. The simplicity of the design is mirrored beautifully with the art style. Raindrops on the normally still seas ripple with mesmeric effect and your little infantry units will jostle and stamp their feet nervously as they await the oncoming hordes. But visuals aside there are some fundamental issues with what Bad North is wanting to be. It has positioned itself as an RTS game with all the elements distilled down to their purest form, yet the faint whiff of an over-reliance on random number generation removes the sense it is skill that will see you winning the game rather than pure dumb luck, and that is a shame. Bad North feels very much like a game that you can pick up and play at any point, but it never gave me anything to make me consider it in a more serious light.

Lovely to look at
Strong pick and play quality

A minimalist's take on the real time strategy genre, with a strong pick and play quality that doesn't quite do enough to bridge the gap between novices and veterans of the genre.