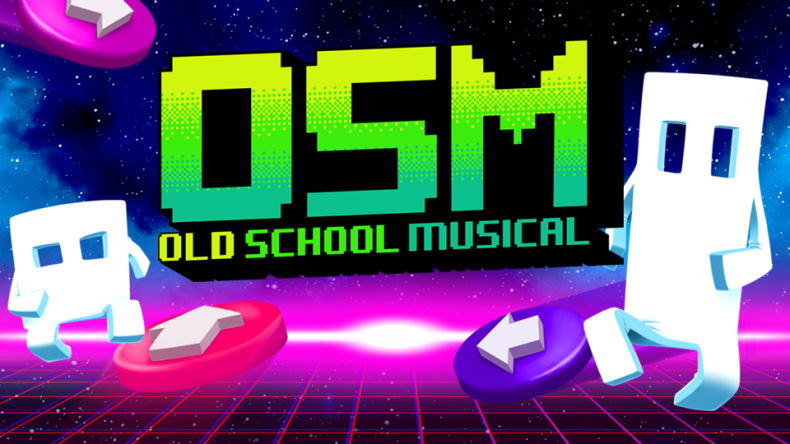 Every now and then a game comes along that you’ve never heard of before that just makes you sit up and take notice. A title that goes over and above what many others of its ilk do and you never would have known without the help of a guiding hand of a critic or a YouTube video. Well, this is one of those times, I am that messenger and that game comes by way of your memories of late 80s/early 90s games culture and two quadrilateral protagonists Rob and Tib.

In an unassuming start to what turns out to be a trip through gaming memory lane, you’re put through your paces by the mother of the protagonists as she trains them to be heroes. Rob and Tib’s secluded life is thrown into chaos when their little island starts glitching wildly. It’s up to you as you experience Rob and Tib’s adventure to hit buttons that correspond to moving icons in time to music to save the day. So far, so very (unconventional) rhythm action.

Where Old School Musical really sets itself apart is with the worlds the characters travel to, because it borrows heavily from retro game royalty. No matter how old you are it’s likely you’ve played something that gets riffed on here; you’ll find homages to Mega Man, Metal Gear, Outrun, The Last Of Us, Metal Slug and more, and it’s all delivered with an irresistibly quick wit and some amazing music. With this genre the music is normally the star and here is no exception, the chiptunes on offer here are easily some of the best I keep ever had the pleasure of listening to. The majority of tunes echo many of your favourite games while maintaining their own identity. Tracks like Keygen 21, Run for Joy Naive and the beautifully titles Ballad of the Cool Fish are real toe tappers and serve to draw you right in to the game’s rhythm. I can’t emphasise just how brilliant the music is here, the best tribute I can honestly give it is that it’s a crying shame that there’s no option to just listen to the game’s soundtrack because if you just want to kick back and listen it will boot you for failing the track.

No good rhythm action adventure can make it on music alone though, good icon placement is a must to bring the player in and La Moutarde’s work here is nothing short of exemplary. I’ve mentioned before that allowing yourself to be swept into the beat of the song is the best way to play this genre and when the icons are place so tightly and masterfully as they are here it’s absolute heaven to play. The groove here is so strong that after every level you’ll be wondering if you can fit another one in, I really rolled the dice on my commute a few times trying to get one more level in before my stop. The thing is, the base story mode isn’t even the best part! Once you’ve completed it you’re allowed to play a chapter that is as yet untold. I don’t want to give too much away here, because what it does from there on only serves to bring out the best in the music tracks and your ability to follow the note icons thanks to a selection of modifiers that are applied to each level. To say anything more would be a disservice to you dear reader, it’s just something that you really have to experience and it really helps that the journey to get there is as fun as it is.

Allow me to stop gushing for just a moment just to get a couple of gripes out of the way here. Firstly, in a game such as this you may find that you need to pause it, that’s fine, what is an issue, however, is when you unpause. Unfortunately there is no countdown to put you back into the action. When the icons can flow thick and fast as they do here those precious seconds to get your bearings before the fun starts back up can mean the difference between success and disappointment, here’s hoping this is something the devs can patch in at some point. The other issue stems from the menu system, most notably the inclusion of a Multiplayer mode. Now, my problem isn’t the mode itself, it’s the fact that if you go into it by mistake that there’s no quick way out. What I mean is, the first thing it asks for is for you to press the L and R buttons on the controllers to sync one for each player, so you need to have separate Joy-Cons or controllers for each player. Now, what this means is for someone like me who was playing in handheld mode and decided he wanted out of the mode I had two options: 1) remove the Joy-Cons from the Switch, sync them and then quit out of the mode, or 2) quit the game and re-load. It’s a minor quibble, but I wish there was an easier way out if you go in by error.

I love Old School Musical; I cannot stress that enough. This is a package where the creators have thought of almost everything the player could want from the arcade mode where you can choose any song from the soundtrack to play which is organised by game segment or the tune’s creator through to the carefully chosen references. From the jokes about terribly clothed game characters and on to the poor member of staff who was made to dance shirtless on the failure screen, there’s just so much here to love. Sometimes a game comes out of nowhere and makes you sit up and take notice, on this occasion that game is Old School Musical.

No countdown after pausing

With a combination of amazing chiptunes and retro goodness Old School Musical should be the game to convert you if you’ve never considered Rhythm Action before.