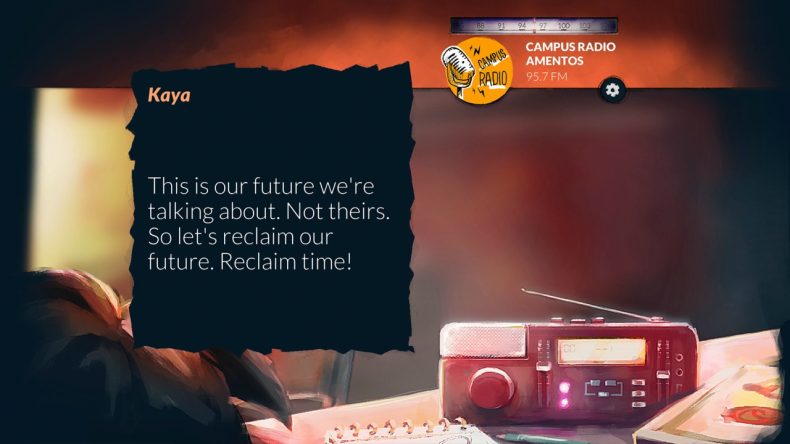 Let’s face it, right now, politically the world is a mess. We all know politicians lie, but it’s never been easier to obtain the right information and point out those lies than it is today. The problem is that there’s always a large contingent of people who will defend easily provable lies with every fibre of their being even if they have nothing to gain from it.

In Alt-Frequencies you have acquired yourself a new fangled radio; it’s able to pick up a variety of channels and it can download and upload clips to and from those stations. It’s quite a handy piece of kit and once you’ve been taught how to use it the voice of Winston asks you to seek the truth and use the words of others to manipulate the radio stations to help others. So from here the goal is to listen to the separate radio broadcasts for clips you can use to influence the other broadcasters to say what you need them to say.

If this sounds difficult let me explain: the stations constantly repeat because for reasons that are never really explained the government has decided to induce a time-loop. So, over and over these broadcasts will go on until you can find the right clip to play to the right station to get the right reaction that either leads to a new bit of info or takes you onto the next day. It’s a clever idea in principle, but because there’s never any reasoning behind the main story beats the game is over far too quickly and with very little in the way of payoff. Interacting with the radio is easy: you swipe left and right to change stations, you swipe down to download a clip and up to upload one – simple. The hosts of these stations all have distinct personalities and ask for listeners to contact them giving you an ‘in’ to distribute the lines you hear from the people on the other channels. One host is a cheery upbeat breakfast DJ and her compatriot, then you have a Piers Morgan-a-like offendatron, a News Channel and a student radio station. Each day offers up around three minutes or so of audio clips which you’ll need to listen closely to so you can pick something that’ll be a good response for one of the other stations.

As you poke these people with little snippets more information becomes available pertaining to the relationships of the government official behind this ‘time-loop’, Minister McMillan, and it all takes on a very menacing vibe with people getting sick and others feeling like they’re going mad when it turns out they’re just not affected by the loop. But, overall, it just feels like it doesn’t go anywhere, the choices you make are far too obvious and there’s nothing outside of the main choices which means you’re constantly being led by the hand. Even the one moment that seems like a pivotal point for a separate ending turns out to be nothing more than a red herring.

Overall it’ll take you about three hours to get through this on your first go, that is, if you decide to play through it again afterwards, but with an ending as disappointing as this it’s a hard sell to yourself to go again. There’s a good core idea here, but it’s just not fleshed out enough, and there’s so little being said of motivations for both the government and the ‘terrorist-instigators’ against the time-loop. Granted, not everything needs to be a ‘both sides’ issue, but humanising an enemy is normally a good part of storytelling and when this point finally comes it’s too little and too late. Alt-Frequencies then is an excellent concept let down by its execution. If a bit more was put into fleshing out the machinations behind the time-loop and what the government’s official line for implementing it was it could have been great. Some more flexibility in the reactions would have been good too. There are canned responses for clips that aren’t relevant to the stations, and the scope here for play would have been fantastic but it never delivers on the promise of just constantly feeding radio station hosts with a barrage of constant rubbish.

At the very least the game is short enough to not outstay it’s welcome and it’s charming enough to at least bring you to the end of it’s story. Don’t expect too much of a challenge, and try to overlook the issues with the story and you’ll at least enjoy it the once, and I guess that’s what we generally expect from mobile games. I just wish it had more.

Turn on, tune in, drop out, that’s pretty much it, don’t expect anything more.