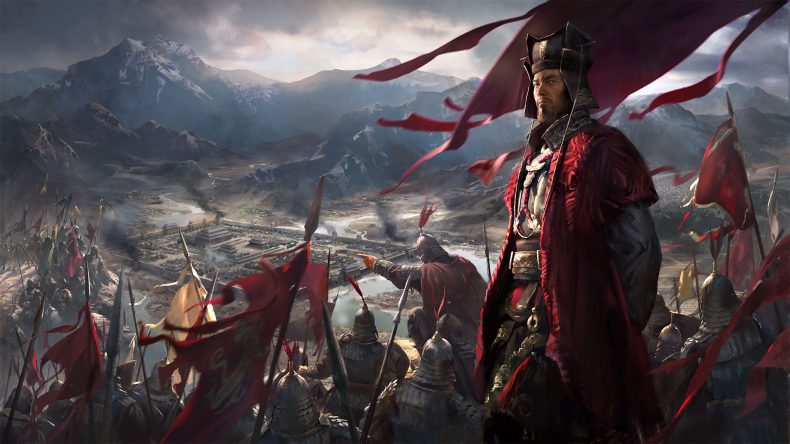 China will always hold a special place in my heart. It’s where I proposed to my wife and effectively began a new chapter of my adult life. I’m a big fan of the culture and architecture as well as the history of the nation all wrapped up in its myths and legends. So Total War: Three Kingdoms is then, on paper at least, an ideal title for me. Not only does its setting explore the infamous Three Kingdoms period in Chinese history, but this latest offering in the Total War series aims at providing more characterisation of the people involved in those bygone events.

So whisk yourself back to 190 AD, and the once glorious Han dynasty is nearing its end. The current young Emperor has been manipulated by the warlord Dong Zhuo. Can you rise up as the leader of your faction, take on your rivals, overthrow Dong Zhuo, and eventually become Emperor of a unified China? All in a day’s work, right?

Like other Total War titles, the bulk of your time will be spent in the meaty Campaign mode, where you can assume the role of various notable historical figures of the time such as the strategist Cao Cao or the benevolent Lui Bei. You are a leader of one of 12 factions currently vying for power across the country, and you do so by securing towns and cities, and their surrounding resource networks. A turn for each faction is considered a season’s worth of time, with certain actions (such as upgrading buildings or laying siege to enemy cities) taking multiple turns to complete. For the uninitiated, the experience laid out in front of you is a daunting one. You’re faced with a user interface packed to the rafters with bits of information that vie for your attention, which as becomes clear is a pretty solid metaphor for the various issues and inter-related problems which will be competing for your consideration throughout the campaign. Three Kingdoms does a pretty good job of balancing this, not only by offering in-game tutorial support to those unfamiliar with the franchise, but it also with various Campaign difficulties and a handy information overlay that can be toggled on or off, to provide summaries about the various parts of the interface for your reference as and when needed. It means that despite Three Kingdoms being a beast of a game to grapple with initially, it feels very accessible and inviting. And for those newer to the series, an awareness that there is a lot to learn but that you don’t have to remember everything straight away, lets you ease yourself into the experience and enjoy what it has to offer.

The main gameplay is broken up into two main types. You control your chosen faction leader and their army across the world map, moving around to explore the sprawling Chinese countryside. Movement is limited to a certain distance per turn, so once you’ve moved to position, you may want to upgrade a building from one of your conquered cities, to provide additional income, food or military support. This part is simpler than other town management titles, but the impact of your decisions is still critical because different building setups can have both positive and negative effects on your population and military strength, and striking the right balance could be the difference between prosperity and disaster. The meat and potatoes of Total War are the strategic battles, and they operate in a similar way to previous titles in the series. Armies are tied to Generals, of which you can have up to three in any one retinue. Recruitment of additional troops can be paid for, or claimed from losing parties after a successful battle. As in previous games, tactics in these battles is paramount, with careful planning around where to direct your troops to give you the best chance of success. Will you wait under the cover of trees, and lay in ambush? Or will you send cavalry around the flanks to power through preoccupied enemy forces? How can you best maximise the use of ranged attack power and the might of your melee units? All important questions and considerations that make the battles so engaging and unique each time they are undertaken, and ultimately more rewarding when you are victorious.

Generals are the biggest change this time around as they not only command your forces in battle, but they can also be a powerhouse of military strength. There are two gameplay settings, Romance or Reports, with the latter being a more realistic portrayal of generals as inspiring individuals, but just as susceptible to a sharp blade in the abdomen as the next warrior. Romance mode, however, sees the generals imbued with unique abilities that can change the tide of battle, as well as being much stronger and able to ride through multiple enemies with ease. I played most of my time in Romance mode and preferred that to Reports purely because it gave some special purpose and importance to the generals themselves, rather than being just another fighter in the ranks. Generals can also have one-on-one duels with enemy generals mid-battle, the outcome of which heavily turns the battle in the victor’s favour. You can interfere with the battle with your other troops, but there are serious ramifications to doing so, not least the sense that you’re cheating your way to winning.

While I really enjoyed the battles of Three Kingdoms, the shift in focus versus previous games to a more character-driven, relationship-building approach actually makes the build-up to battles and the ramifications of the squabbling factions all the more interesting. Outside of battle, you can conduct a variety of negotiations with other factions, be it peace treaties, trade deals, alliances, or declarations of war. Certain decisions you make will inadvertently offend or appease other factions, even if they are not directly part of the negotiations. And the clever thing is, is that it feels reactive to what’s going on, and the personalities of the warlords involved. Some, for example, will be resolute in their arrogance towards you even if they are nearing defeat, whereas others will noticeably cower and offer anything for peace if you assert your dominance on their lands. Allegiances will change and friends will become enemies with more political plot twists and changes of the heart than the final series of Game of Thrones. And the character interactions and ramifications aren’t just from rival factions; within your own faction you command a court and have to choose various generals and family members to fill your positions of power, with various bonuses depending on who is selected. But those under your control have their own preferences, thoughts, and feelings, and may get tired of their lowly position or long for a new challenge. It is your job to make decisions to keep your court happy, as much as your generic population so that your ever-growing span of influence can continue to prosper. Generals in the same retinue also work better if they have a stronger affinity with one another, and this can also change over time. It all adds up to a much more human element to proceedings, which is an interesting juxtaposition against the often mindless slaughter of the battlefield.

There are a couple of issues, though. The first is one of performance, in that the initial load time when you reload into a campaign is excessive. Other loading screens before battles can take a little while, often interspersed with your generals exchanging motivating quips, but that initial load screen, whilst it does have a spoken narrative overlaid to draw your attention away from the wait, still feels tiresome, especially when all you want to do is jump back into the action after a break. Also, the sheer amount of options and information that you have to micromanage will likely overwhelm even those familiar with the series, as they get to grips with the more relationship-driven aspects of Three Kingdoms. And given that it shows you everything up front, there’s a danger of it feeling repetitive for some as no new mechanics get introduced over time, relying instead on your improved awareness and understanding of the mechanics as you go. It means that likely your first few hours in the Campaign mode will feel a little stressful. Going back and starting a new campaign, aware of all the different mechanics, was a much more rewarding experience as I hit the ground running. Veterans of the series won’t be put off by these niggles and will instead embrace the level of content and detail on offer. Whether in the sprawling Campaign mode or a custom battle against friends or the CPU, there’s plenty here to reward those who love the genre. But Three Kingdoms’ focus on the human side of such conquests feels like a breath of fresh air, and means it doesn’t rely on the setting alone to separate it from previous titles in the franchise. And its addictive gameplay, whilst repetitive, is engaging and enjoyable because you’re always pushing and progressing in your quest for dominance. Three Kingdoms is very much a game where before you know it several hours have passed, and you’ll still be eagerly wanting to carry on.

Heroes of legend are made not just by their victories in battle but by the decisions they make, and the impact on those around them. Three Kingdoms understands the importance of the character behind the name, and while it still allows you to craft your battles with precision and focus, it also permits you to mould a personality. It partners decision-making and management with leadership and inspiration, allowing you to carve out a true dynasty worthy of one of the greatest empires in history

Cold, hard battle strategy meets the warmth of human interaction and politics to create an engaging and addictive experience.