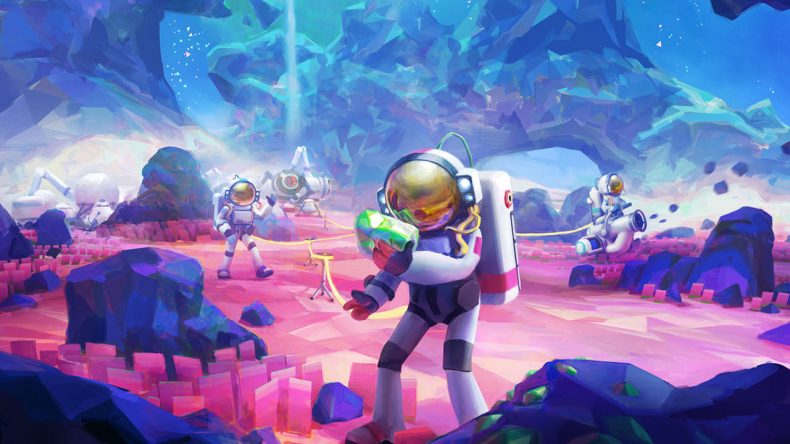 I missed Astroneer when it was first released back in February, which is a surprise because it is precisely the sort of game that I am immediately drawn to. A serene exploration game with crafting and building elements, a cutesy aesthetic AND set in space? Sign me up! The reality is pretty much that, too; beautiful art direction and playful, toy-like character and object design make it a joy to play. However, there is a real sense of aimlessness, particularly in the early hours, that starts to creep in and dampen the enthusiasm for exploring.

You can play on your own or team up with a friend. Much like in Minecraft there is no random matchmaking to enter other people’s worlds as this is very much a friendly, co-operative experience. A brief, optional tutorial will take you through some of the basics. Survival is limited in that there is very little sense of threat, there are some plants that might cause you trouble and you are always in danger of falling into a cave and struggling to get out, but by far your biggest obstacle to overcome is your oxygen supply. When you are near your base you have a tube leading from your suit to your base delivering you the air you breathe as well as power to be able to craft things and use your terrain tool, but wander too far from that lifeline and you will be at the mercy of your on-board oxygen and power cells, both of which have very limited capacity. You can make bigger storage, of course, allowing you to roam just that little bit further from the safety of your base, but if you really want to explore you are going to have to look at a better solution. That solution is through the use of tethers, an extendible lifeline that can be crafted from the obscurely named “compound” that can be hoovered up from the ground via your terrain tool. The tethers connect to your home base, snaking out in the different directions you have headed off in to search for resources. These tethers have an organic feel to them, almost like the trail of mucous a snail leaves behind it, or perhaps a spider’s web of interconnected gossamer lines detailing the path of your exploration, but always leading back to the safety of your base.

Once you have exhausted the exploration within reasonable walking distance from your home you can craft vehicles to take you further and carry more resources. The crafting is achieved through the acquisition of “bytes”. This resource is found by scanning the alien flora or small minerals. Larger items can be brought back to your base and, if you have a Research Station built, examined for significant amounts of bytes. Once you have amassed enough you can then spend them on new recipes. The amount of recipes can be overwhelming, and there is no real explanation as to what each item does and why you will need it. Some are obvious such as a large printer which allows you to craft larger items, or a smelting furnace that will transform the items you find into another resource. Other items and their functions aren’t so clear, and so in the early hours I felt a little hampered by my anxiety about what best to spend my precious bytes and resources on, particularly as some of the resources required seemed super rare and difficult to find, some even requiring you to travel to another planet. In fact, resource gathering is very confusing in general. Whilst exploring there are resources that are located on the surface of the planet that you can gather using the terrain tool – resources such as “compound” and “resin” are the most abundant and used the most in early recipes. Other items seem much more difficult to find, such as iron. Using my Minecraft style muscle memory I assumed that going underground I would find metal and minerals not located on the surface, however after several hours and absolutely no luck I was defeated and had to turn to some of the excellent wiki entries that have been built around Astroneer. It turns out that Iron is a secondary or refined resource, made from smelting Hematite! So far, so science! Perhaps the cute, toy-like aesthetic is there to subvert your expectations!

Astroneer’s visual style and art direction are extremely striking, and your starting planet features lovely rolling green fields and snow-capped purple mountains. The terrain itself has a low-polygon style to it that is both pretty and frustrating, especially when you accidentally find your self falling into a crevasse and have to make your way out with an imprecise modelling tool. But it is the character and machine design that really stands out. Each piece has the feel of a children’s toy, perhaps LEGO or more aptly, Playmobil. Connecting pieces together has a satisfying clunk, and everything is ludicrously sized to further increase the feeling you are tinkering with a play-set. My favourite detail is how the menus balloon out – opening your backpack for example removes it from your back and brings it to the fore of the screen so you can see in detail everything you are carrying, while backing out of it snaps it neatly back onto your Astronaut. It doesn’t all work though, as the controls on Xbox seem particularly fiddly. Combine that with the change in perspective when you are examining your backpack and it can feel like you are being hampered a little by the imprecision of a controller rather than a more refined mouse cursor. As is often the case with this type of game, there is still tonnes more for me to see and do, but at present there isn’t really the draw of a final destination pulling me through to discover more, and I think that it does need something to focus your attention on. The building elements are suitably interesting and do encourage you to explore to find the rarer resources, but other than improving on and increasing the size of your home base there isn’t much else to do at present. Once I had resolved some of the earlier blockages to my progress, mainly down to my own thinking, I really enjoyed the logic and science base to much of the crafting tools available to you, and I’m consistently delighted by the visual style of it. Astroneer is out of early access now, but it still feels very much in its genesis, I am however extremely interested to see where it goes in the future and will certainly be dipping into it from time to time to see if anything has changed.

Astroneer is a lovely serene survival crafting game that can feel aimless at times, but has masses of potential to be something special.