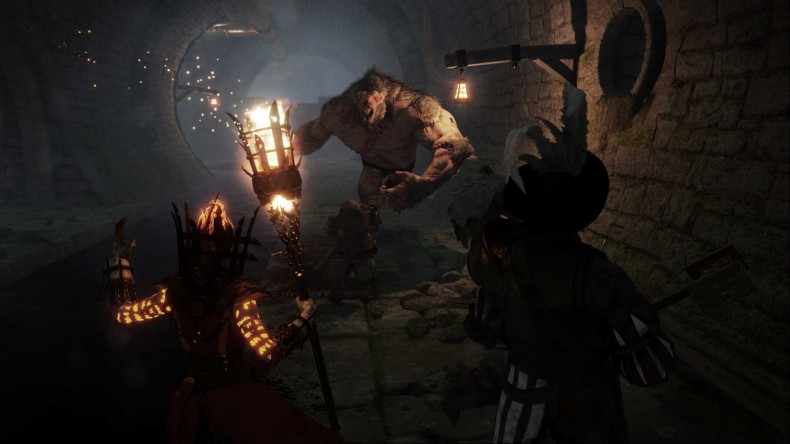 So you take the exact template of Valve’s Left 4 Dead, and then, while ignoring the raised eyebrows and perplexed stares of everyone else in the room, swap the zombies for giant rats, Middle America for the steampunky world of Games Workshop’s Warhammer franchise, and add loot and XP levels. Now what do you have? A work of genius, you say? Well I’d be inclined to agree. Those eyebrow-raisers don’t know what they’re talking about.

Vermintide is the result of one such genre-splicing brainstorming session, and does the whole group-of-players-versus-overwhelming-odds better than Evolve did, and almost as well as Left 4 Dead itself.

Set in, around and under the city of Ubersreik during Warhammer’s End Times period, Vermintide tasks you with defending the beleagured survivors of an onslaught of Skaven rat-men spreading death and disease throughout the highways and byways of the once-proud city. Flooding the streets, sewers and surrounding forests, the Skaven are high in number and relentlessly aggressive. You pick your character from five diverse heroes drawn into the troubles. Kerillian the Waywatcher uses a long bow and twin shortswords, the Soldier Markus wields a heavy hammer and a sharp wit; Bardin the Dwarf Ranger comes armed with a battle axe and crossbow, while Viktor the Witch Hunter dual-wields pistols and the Bright Wizard Sienna employs devastating fire magic. All the weapons can be swapped out for several different types and tons of items; for example, Markus has access to two-handed weapons or sword & board combos.

Loading up drops you in an inn where you can change your gear, upgrade your weaponry, or select a mission from the map table. A quick game will plonk you into a random map, whereas customising your own allows you yo play either Adventure Mode (with a loose story) or a wave-based endurance mode. Either way, you’ll earn XP to improve yourself and better your chances of survival.

Presented in first person, Vermintide is a game about killing mass amounts of enemies while pushing towards a final objective. As in Left 4 Dead, you’ll need to work together, as special Skaven pop up now and then, such as Ratling Gunners, Rat Ogres, and Hook-rats who will drag you away on rope and tie you to a stake. You can carry one medical item, one bomb and one buff potion at a time, and top-ups are rare. Special encounters and aid drops are random, so the trick is to stick together and use items wisely, often during the end-of-mission events where you’ll often have to hold an area, protect a target or gather scattered items. As expected, Vermintide works ten times better with other people. The AI Bots are fine on easy, mostly useful on normal, but utterly pointless on any higher difficulty. They follow you everywhere and only really come in handy for thinning the swarm and leading you on, since there’s no map or objective marker. Bundle in with other players, though, and you’ll have a lot more fun – unless the host leaves, of course, in which case you’re booted. It’s irritating when it happens and feels a little archaic, but it’s not overly common.

Bugs, unfortunately, are. With so much going on (especially when a distant horn sounds to signal a flood of approaching Skaven), there are often clipping and collision issues, occasional stuttering and a smattering of visual glitches that are annoying rather than game-breaking.

The combat itself is cathartic mayhem, as you hack, slash and shoot your way through the horde. Occasionally it feels a little disconnected when there’s just too many Skaven to fight, and you’ll often come out of a haze of blood and fur and flying limbs to find everything dead and your health in the red, but those kind of narrow wins are a major part of what makes Vermintide so much fun. When it all works it’s gloriously dark and dripping with atmosphere. The Skaven make for a terrifying menace and the city streets, strewn with rubble and lit by flickering firelight, make the perfect arena. Wading through sewer water or battling on the rooftops offer claustrophobic thrills and dizzying falls, respectively, while stairways and ladders offer multiple ways to reach higher levels. There are also plenty of opportunities to set up crossfires and choke points if you know what you’re doing.

Loot is distributed at the end of a mission by way of a dice roll. You can equip trinkets and even find more loot dice to increase your chances of a favourable roll, but it’s all down to luck in the end. RNG plays a heavy hand, but the occasional high-end reward usually makes up for all the near-misses.

Vermintide is an example of someone taking a great concept and making it their own. If I had never played Left 4 Dead I’d be blown away by Fat Shark’s violent Warhammer adventure, but because I have I can appreciate it for what it is: a homage, rather than a rip-off, that does something with the core mechanic of an existing IP that feels like it was meant to be. Warhammer fan or not, Vermintide is an excellent team game that deserves your attention.

Vermintide is an under-appreciated gem with loads of replayability and heaps of atmosphere.

You may also like
Warhammer - The End Times: Vermintide

Fatshark announces that Warhammer – Vermintide 2 is now available on Steam.