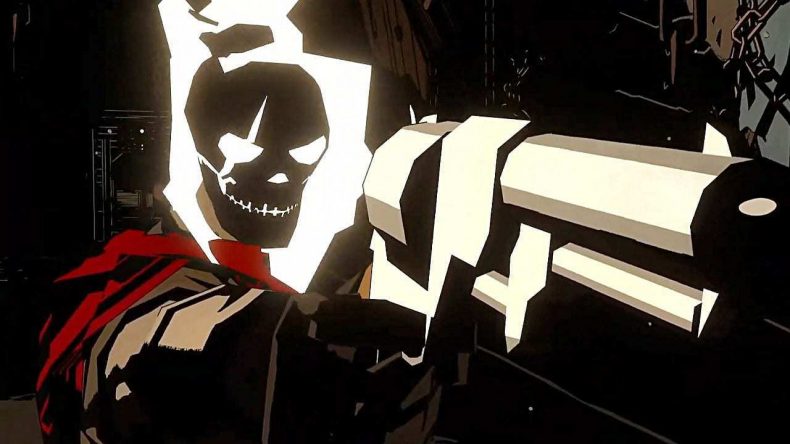 It’s more or less a proven fact that adding Ron Perlman to a thing makes it approximately 82% cooler. I mean, the data’s out there if you need it. Developer Upstream Arcade certainly know it’s true, as the few shortcomings in their top-down, rogulite cover shooter (we need to come up with some new genre names) West of Dead are much more palatable when you’re listening to Ron Perlman’s deep gravelly drawl paint a sheen of laidback cool over everything.

For one, anyone else would be at least somewhat perturbed by the predicament in which protagonist William Mason finds himself. You see, he’s dead. And not just dead, but trapped in purgatory with his head permanently ablaze a la Ghost Rider, forced to battle through an undoing cycle of death and resurrection in a maze-like netherworld. Most people in this situation would worry, but Mason – thanks to Perlman’s stellar narration – might as well be waking up in a strange bedroom with no more immediate danger than having his pants on backwards and a weird new tattoo. The most immediate comparison that came to mind was to Ritual: Crown of Horns, another twin stick supernatural Western, but West of Dead also shares a lot in common with Dead Cells. After each death, Mason wakes up in the same run down bar in Purgatory, served by a friendly yet weary barman who seems to know more than he lets on. The world beyond the bar is randomly generated, and begins each time with Mason picking up two guns, which are randomly assigned from a pool of guns you’ve unlocked during runs.

One thing that really stands out is the cover mechanic, whereby Mason will stick his back or shoulder against any available cover, and then must lean over to aim and shoot. Cover is destructable, but the push of a button (A, on an Xbox controller) will cause him to slide over or around the cover to find the nearest alternative, or perform a stylish dodge roll to get out of trouble. Enemies come in a large variety of shapes and sizes from gunmen, horrific hounds, and zombies, to wendigos, witches and huge butchers who hurl whirring meat cleavers at you from afar. Movement is key to survival, and it isn’t long before you notice that West of Dead has a peculiar rhythm of its own.

It’s all down to the gear you pick up in each run (as you begin each one with none of the upgrades you picked up, but some of the gear and items), as a wide range of guns from rifles to muskets, and sawed-offs to coach guns, allow for different tactics. You can also pick up a variety of abilities and items, such as dynamite or throwing knives, or more supernatural items that grant healing buffs or increased reload speeds, for example. Different guns reload at different rates, and you reload fastest in cover, which of course can be blown to bits by your enemies. You’ll often need to make use of the entire room, time your dodges right, use your healing items sparingly. Another element that plays a major part is light. Enemies lurk in the shadows, and igniting lanterns will stun them and, crucially, allow you to target them. Without light, you’ll be firing blindly into shadows and taking hits from unseen assailants – and you don’t last long. Regular shrines allow you to improve your stats for the duration of a particular run, and you can visit a witch between areas who will trade your Sins for item unlocks. The second currency, Iron, allows you to buy weapons and equipment from a shadowy merchant who pops up sporadically.

Death is a learning experience here, as it is in all roguelites, and though you can find and activate teleporters and improve your survivability, you’ll always be reduced to almost square one with each failure. The story is deliberately obscure, revealing itself in small increments at set moments such as after boss fights, perhaps in snippings of flavour text or soundbites from the various NPCs and Mason himself. Ultimately it doesn’t much matter why you’re here, and the never-ending loop of death and discovery is enough to keep you hooked.

Which is a good thing, because you’ll see the same areas an awful lot, and face the same enemies with the same items over and over. While there is a decent variety, West of Dead falls short of the massive diversity of choice and design seen in Dead Cells, though manages to deliver an enjoyable jaunt nonetheless. Part of this is down to the cell-shaded, comic book visuals, and part of it is down to Perlman, who delivers his lines with a nuance so practiced you won’t know he’s acting at all. His voice sells the world, adding to the atmosphere like a block of frozen ice dropped into a glass of dry whiskey.

The camera doesn’t always make things smooth, and the aim assist can be finicky. Several times I found myself struggling to see exactly what was happening in a given room, and sometimes no matter what I tried I’d miss an easy shot on an enemy. It wasn’t enough to ruin my enjoyment, but in a game that punishes death so strongly, any death not down to your own personal failure is frustrating. Overall though, West of Dead is a compelling and enjoyable challenge, helped along by Ron Perlman’s undeniable charisma and a handful of interesting new ideas.

Intriguing world
Cover mechanic is cool
Ron Perlman is in it

Aim assist can be temperamental
The fixed camera can be tricky

West of Dead is a compelling and enjoyable challenge, helped along by Ron Perlman's undeniable charisma and a handful of interesting new ideas.