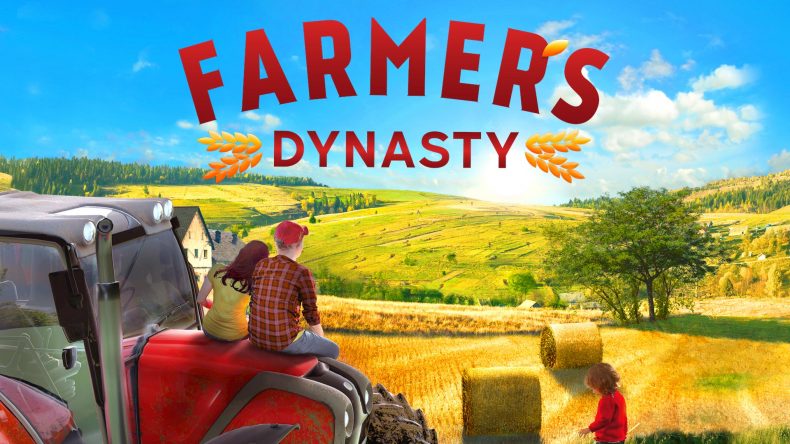 I think my neighbour in Farmer’s Dynasty might want to kill me. I am scared that when I go to sleep I will wake to him looming over me, perhaps a piece of wheat hanging lazily from his lips, pitchfork in hand. He seems nice enough, and I guess he has given me a few pointers on how to deal with the mess of a farm that my late grandfather has bequeathed me, but frankly there’s something about him that worries me. I think it might be the generic American accent that sounds remarkably similar to my own voice. It might be also that he speaks to me at an extraordinarily slow pace, like an automaton in a man-suit merely pretending to be my neighbour. I am not sure, BUT either way I think he’s a wrong’un.

The fact I have a back story for Colin (or maybe it’s Clive?) is perhaps the most interesting thing I can say about Farmer’s Dynasty, at least for this Switch version. It runs so dreadfully after anything more than twenty minutes of play that I am struggling to find the enthusiasm to even continue, and I don’t say this lightly. The performance is so woeful that the constant frame rate juddering induces nausea after a couple of minutes. Not even the disembodied hand that floats in front of me, waving a power tool menacingly, is enough of a focal point to suppress the creeping feeling that this video game is actually making me feel sick. There are other problems as well. Pace has been a consistent issue throughout my entire time with Farmer’s Dynasty, first there are the loading times, then the performance issues making the simple act of walking from one location to another a process that feels like a horror sequence where your destination is right there, but inexplicably gets further away the closer you get to it. Then when the game is running at a decent frame rate your actual movement is so slow it takes you ages to get anywhere anyway. Vehicles don’t improve this any either. Clancy, or whatever my creepy neighbour is called, kindly gifts me a tractor as a thank you for fixing the roof of his barn. I kind of wish he hadn’t because this thing is slower than a steam traction engine, and I need it to start tilling my fields in preparation for crops. There are options later on, of course, to upgrade my machinery to more modern and efficient counterparts, but this early game is such a slog I’m tempted to ignore my grandfather’s wish for me to take on the family farm and bugger off back to my comfortable city life.

There are potential rays of light through the mire of poor performance. Aside from a farming simulator there are some light RPG elements where I can build relationships with my automaton-in-human-skin-suit neighbours. There’s even a chance that I might meet and marry a woman, but only one that will “learn to love me over time” according to helpful hints that flash up on the interminable loading screens. It seems I am expected to take a wife and then through sheer force of impressive farming and fixing things she will learn to love me, or maybe it will be my impressive social points score? Either way, I am clearly anticipating this to happen soon as the house that has been left for me already handily has a nursery with a baby’s cot sat at the ready.

Aside from building relationships with your neighbours by bringing them gifts made from your farm produce, or fixing up their dilapidated barns to increase my social points standing, there is a satisfying flow of fixing things, and growing stuff. I generally really enjoy these kind of simulators because I do actually find the process of building things a cathartic process. Growing crops, tending to animals and fixing a roof here and there is good, honest work and underneath the awfulness of the way the game plays there is enough of these activities to eke out some kind of enjoyment. Your very first task after you have helped Clyde out is to fix up and repair the various buildings that make up your farm. I actually spent a lovely hour or so just pottering around utilising “Engineer’s Sight” to highlight areas that needed my attention – replacing the steel of my greenhouse, filling in gaps in the wall of my grain storage, rebuilding the hen house, and repairing the roof of my house. Even the process of planting crops and then seeing them grow provided some satisfaction. There’s a hunger and sleep mechanic to manage as well, and the aforementioned “social points” that act as a kind of currency with your neighbours that helps you get along with them and make your life as a farmer a little easier. Accrue enough by performing odd jobs for them and they will reward you with gifts. It’s not an unpleasant mechanic, if you can get that far that is.

Farmer’s Dynasty could have some appeal. It has an interesting blend of light RPG, farming and life simulations. There is some small enjoyment from fixing things, and the interactions with various NPC’s have a “so bad it’s good” kind of quality to them with hammy accents and stilted animations. It is, however, a woefully optimised piece of software on the Switch with a frame rate that slows to a juddering halt after no more than half an hour of play, so much so that it is impossible to recommend in its current state.

Fixing things is quite therapeutic

Farmer's Dynasty could have some appeal with a blend of RPG, farming and life simulations, but it is a woefully optimised piece of software with frame rates that judder to a halt after thirty minutes of play.