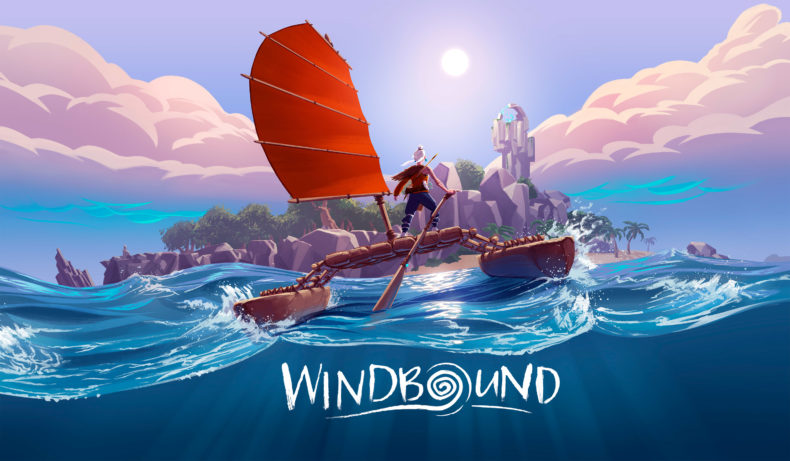 Windbound has a strong start as the main protagonist Kara is separated from her clan during a storm. A colossal sea creature rises from the depths destroying the fragile vessel she’s on, sending her into the waves. When she awakens, she is in a strange land, an archipelago of small islands flanked on all sides by the sea. She has nothing bar a small knife, and her goal is to survive long enough to uncover the mysteries of the islands and to reunite with her clan. It features a strong central theme and an interesting sense of discovery, but some of the mechanics get in the way and strip a lot of the fun away.

The survival aspects of Windbound quickly set into a rhythm. Playing in third person, you will need to guide Kara to gather resources to craft increasingly complex items that will aid her in her survival. Cutting grass and gathering sticks and stones will allow you to craft crude weapons for her, whereas gathering berries and culling the lands of its local fauna will provide her with sustenance. There is a stamina and health bar to contend with but it is all fairly simple stuff and complemented by a streamlined crafting system that, while fiddly to navigate, communicates clearly the item type and the resources required to craft it it. 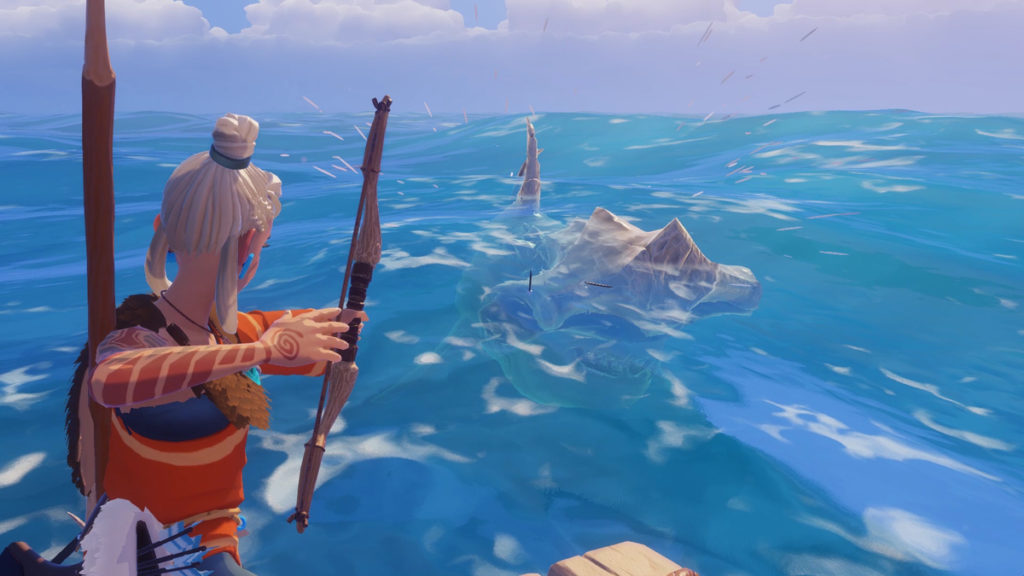 Like all survival games, you will need a place of safety, it is here where Windbound distinguishes itself a little from other survival games. Marooned on an a series of islands, it makes sense that Kara will need to travel across the waters to each one to gather different resources and craft more complex items. As such your boat is your place of safety, a place that grows with you as you explore more and more of the worlds that Windbound has to offer. It is a neat mechanic and upgrading the boat is one of the strongest aspects of the survival loop. Seeing your vessel transform from a simple canoe that you paddle everywhere with to a multi-layered craft with storage and crafting stations provides a tangible sense of progress, something that the over-arching narrative somehow fails to do.

Windbound is a procedurally generated world with a narrative loosely told through wordless cutscenes. Across the many islands, you find yourself on you will see evidence of a civilisation that has long since gone. Who these peoples were and what happened to them kind of gets lost, so much so that the narrative really doesn’t feel like Windbound’s primary concern. Indeed, this is somewhat borne out by the two ways in which you can play.

The islands of Windbound are procedurally generated, so for each play through you won’t get the exact same layout of islands, neatly ensuring that each time you assume the role of Kara you will have a slightly different process of discovery. You can choose to play Story mode, which means that upon death you won’t lose your items and, more crucially, your progress other than pushing you to the start of the chapter you were on. Alternatively, you can choose to play Survivalist which makes the process of survival a little harder. Upon death you will lose all items other than those you had on your immediate person and, significantly, you will be thrown back to the beginning of Chapter One again. I am sure that there’s a message here that ties with the failed civilisation and your failed attempts to tame the lands around you, but its crudely told and honestly, it is a little frustrating to have made progress through increasingly harder to navigate seas only for all of that to be wasted and asked to start again. Perhaps if the story were more overt the sting of failure wouldn’t feel so bad? 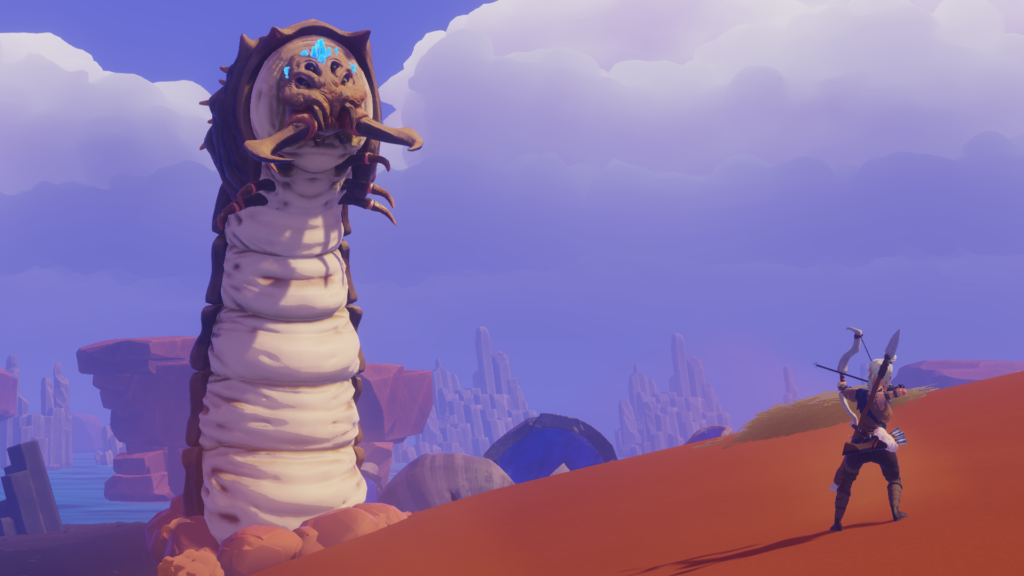 Progress through the islands is the same regardless of which chapter you are in. Kara will need to explore her immediate area and locate three islands that have a huge monolithic structure on them. She’ll have to navigate a climbing puzzle to reach the top and then ignite it using a mysterious light that has infested the amulet she wears around her neck. Once the three structures have been activated another structure will become live and Kara can then proceed through a portal to the next area. In between areas, there is an upgrade area where you can spend fragments found in the world on a variety of skills that will help make navigating the next area a little easier.

Each chapter features a different biome that becomes increasingly more difficult to traverse. Initially, you will be faced with islands that are close together, separated by calm seas. Later chapters will provide you with larger and more dangerous creatures to slay for resources as well as islands that are separated by increasingly difficult waters to navigate. I found the sailing awkward. Tonally I think it is supposed to feel like a struggle, however, in practice, I found it more irritating than I think it was intended to be. Initially, Kara moves the boat through her own paddling, but as you upgrade your vessel you can add a sail and a rudder, and you will need to angle that sail and your boat to successfully use the wind and tides to your advantage. The issue is that constantly struggling against a headwind in a vast open sea makes you feel like you are making no progress at all and it quickly devolved into an irritating chore. 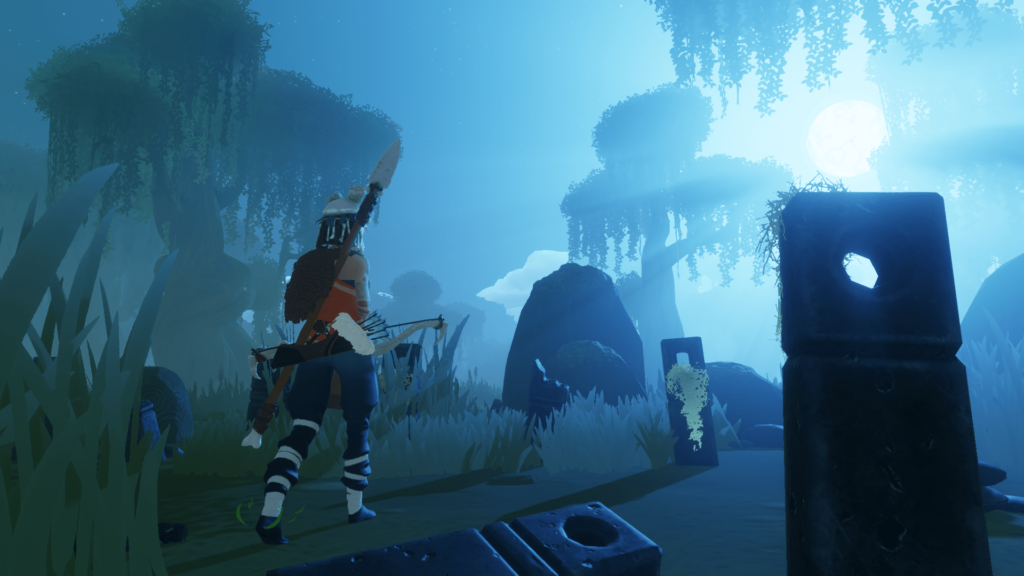 There are other areas of concern too. The combat, although not a primary focus of Windbound, is a little dull. Hunting animals is necessary for certain crafting materials and you have two different ways of achieving this: ranged or melee. Fighting creatures with the bow and arrows that you can craft is perfectly fine, however the close combat is imprecise and can be frustrating when surrounded by a number of enemies. Kara has a limited skill range which essentially means she can lock onto an enemy, jab at it with her spear, and roll out of the way. It feels sluggish and ineffectual, and can cause you to take far more damage than you’d like, and particularly on survivalist makes the process one of dread. Fortunately, you only really need to engage with combat when trying to obtain a certain crafting resource.

There is promise in Windbound. The boat crafting is really strong, and makes Windbound stand out from the myriad games in this genre. There is a real sense of progress and ownership over your craft as it progresses from grass canoe to a yacht worthy of a playboy millionaire. There’s even a neat mechanic whereby you will have to pay attention to how you craft it as too much weight on one side will ensure that you’ll be tipped over the minute a wave hits you. The procedurally generated nature of the world is also a cool idea as that sense of adventure and discovery that is lost after the first time you play a survival game does persist over repeated playthroughs. Despite this though, elements of Windbound are a struggle. I understand that tonally the difficulty that Kara has with traversal across the oceans, and also the punishing nature of the survivalist difficulty are supposed to link up with the over-arching narrative, but that story is told too obtusely and is pushed too far into the background to make these mechanics anything other than an irritant at best and total chore at worst. You always have the option of playing on Story difficulty, of course, and in this mode, Windbound does offer something to make it stand out a little.

Windbound is a story based survival game set across five procedurally generated worlds. It features a cool boat building mechanic and a strong sense of discovery, but some of its systems and mechanics get in the way and can strip the fun away.

Take a look at Satellite Reign In Action