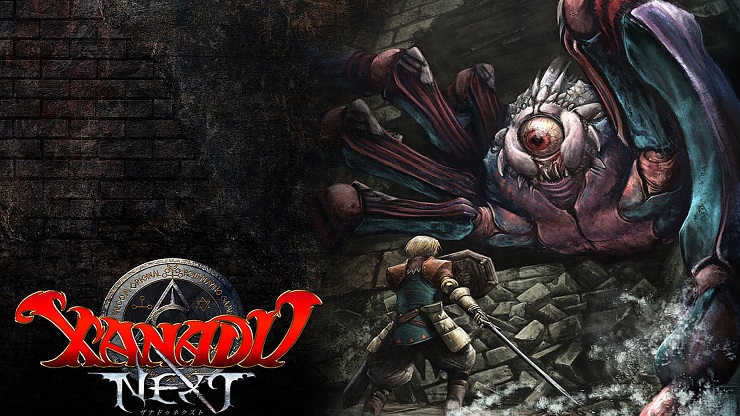 Before I owned a PlayStation Vita, I had no idea who or what Nihon Falcom Corporation and XSEED Games are. Once I started looking for new games to try on the system, Ys Memories of Celceta caught my attention because of the music mainly. My journey with Falcom games has always gone from the soundtrack first and the actual game later. In a way it has been like discovering older music from a band you like as I went from the modern Falcom games to their older releases. Xanadu Next is a product from over a decade ago that was made by Nihon Falcom for PC and N Gage (remember that?) that has been resurrected for modern Windows PCs by XSEED Games.

Before gushing about the soundtrack like I always do in Falcom games, Xanadu Next is an interesting beast. It is an action-RPG that borrows elements from the likes of Diablo and The Legend of Zelda. This is seen in dungeons with light puzzle elements and in combat. There’s a lot to take in from the get go if you aren’t used to isometric RPGs but Xanadu Next will never frustrate you.

A phantom castle appears in a lake when it is foggy. Charlotte Wells wants to study said castle and has a companion. You are her companion who is her childhood friend. One thing leads to another as her curiosity leaves you to explore on your own. A mysterious swordsman kills you and you end up bound to the hub of Harlech village. The story is told through dialogue events that are mostly sparse and items you find throughout your journey. Tablets and Memoirs serve to tell the tale through a nice combination of historic perspective in the case of the former and those from a diary in the case of the latter. The three aspects blend together well thanks to the nice localisation. Xanadu Next is very well written. Having released in 2005 for PC, it plays best with keyboard and mouse. While the release being reviewed here has controller support, there will be moments that require you to use the mouse and it feels annoying switching. I’d recommend not bothering with controller (a rare occurrence for me) and sticking to keyboard and mouse for Xanadu Next.

The world in Xanadu Next feels like a big dungeon that has a ton of secrets and ways for you to discover shortcuts. Exploration is encouraged and discovering those shortcuts is a rewarding experience. Even though visuals are very dated, the art style works well and will remind you of RPGs from a bygone era in gaming. Expect to push blocks a lot. If you happen to die, you can keep your progress but lose half your gold.

The systems in place allow for quite a bit of customisation but also force certain things not present in modern RPGs. For one, you need to go to the church to increase stats when you level up. Your gear might demand certain stats though so you can’t really increase your stats as you please while wanting to use certain weapons. Weapons have skills that can be equipped into one of the four skill slots. These skills require the weapon to be equipped until you reach full proficiency with said weapon. Skills are active or passive and experimenting with different skills is fun. The magic skills in particular are fun to use. In addition to weapons and skills, you can equip Guardians. Guardians are like Personas in the sense that they give you stat boosts and bonuses. Using one more and more will let it become more potent. Enemy designs are hit or miss and are definitely one of the weaker points here. I really like the boss designs even though some of the actual boss fights are a little underwhelming mechanically. It is interesting seeing what they managed to get out of the visual style with a limited budget.

The soundtrack has a lot of great stuff going on. It reminded me of old Blind Guardian combined with Falcom’s signature style but presented in a more raw form. Dungeon music is memorable but the highlights are definitely the Harlech theme and Evildoer with its lovely distortion guitar bits. The raw sound for some of the tracks suits the visuals well.

While I love a lot about Xanadu Next, the bugs and lack of proper controller support really left a bad taste in my mouth. I’ve had it crash for me a few times and some enemies act weird in combat. There are also cases with random freezes forcing me to force close Xanadu Next. I hope the major bugs are fixed at some point because XSEED is usually good with post-launch support on PC.

Xanadu Next does not overstay its welcome at around 14 hours and it is an easy recommendation for Falcom fans or fans of old school action RPGs like their Ys games. Just don’t expect a super polished game by modern standards.

Xanadu Next is classic action RPG from one of my favourite developers with a fantastic score that is let down by a buggy release.