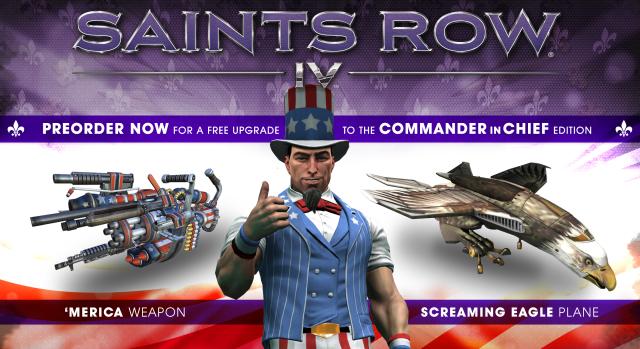 Nobody does OTT action like the latter day Saints Row franchise, and that extravagance isn’t limited to the fun sandbox in-game shenanigans, either. Deep Silver have today revealed a bumper Commander In Chief Edition for their forthcoming Volition-developed title, which will be available as a Pre-Order and First Edition in Europe.

Drawing heavily on tongue in cheek humour that dares to take the mickey out of America and their fiercely patriotic “land of the free” posturing, the game features a mental storyline that sees the United States face off against a horde of alien terrorists, in a gang warfare style.

The Commander In Chief Edition gives you the crazy-sounding Screaming Eagle weapon, as well as a limited edition, red white and got-damn blue “Uncle Sam” uniform, and a veritable stockpile of weapons in the form of the “Merica Gun” package, which offers mini-guns, flame throwers and rocket launchers. There is also a seperate Collectors Edition, giving gamers plenty of variety when selecting just how they intend to go about experiencing the gratuitous gang-on-alien violence.

Saints Row IV launches on current gen platforms and PC on August 23, with the North American release on August 20.