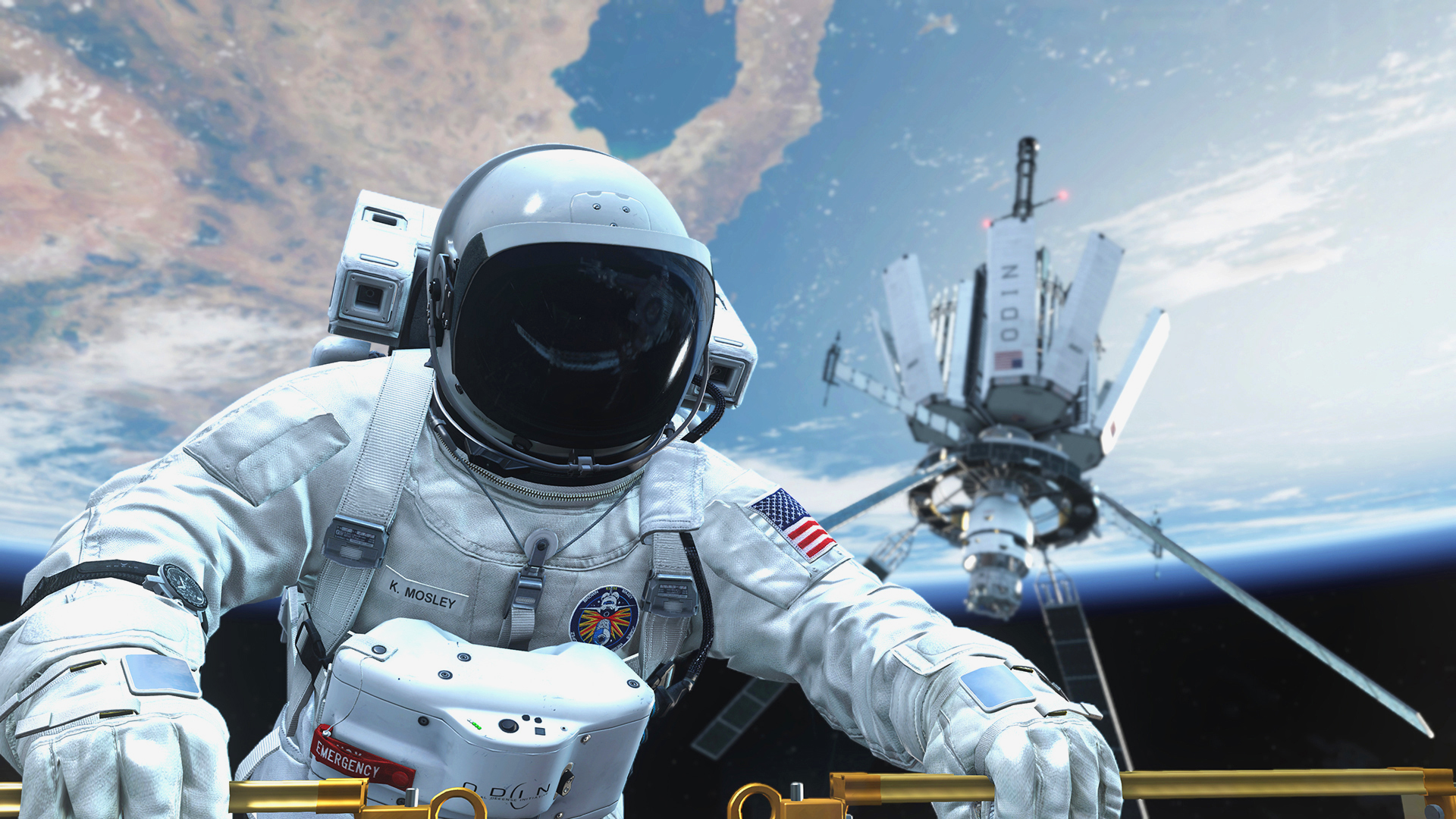 Along with our review and video features, while we were at the Call of Duty: Ghosts review event, we also sat down to chat to Mark Rubin, Executive Producer for Infinity Ward.

I’ve just finished the single player campaign, and I think this may well be the best COD since MW2. How do you feel about that?

Yeah, that’s very good, that’s exactly what we were hoping people would get out of it – is that this feels like a bigger jump that we’ve done in the past.

So let’s talk about Extinction Mode to start with, because this is a big surprise! Out of nowhere. Or it would have been, if certain people didn’t ruin it on the Internet.

So is this your answer to zombies?

In a way. If you think about it, we’ve always looked at having a third game mode, or some alternate game mode since COD4. You remember COD4 had a couple of things – 1, it had all those weird modes that you could turn on after you play the single player campaign. There was like a scoring mode, where you actually scored points for killing people, and then there was a Western silent film version, where it went into this crazy silent film music, and everything was sped up. So there was a lot of like little silly stuff. But it was that idea, and then also at the end of COD4 with the airplane level, that sort of started to create the idea that there’s a new mode.

And then in MW2 we started feeding into the idea of Spec Ops. And then added Survival. We’re also looking for cool ways of doing stuff. The thing that Zombies did is…not only was it a new mode but it also had a bigger self identity away from the game. We were looking at things like that as well, and basically it came down to – from a design standpoint – not focus on zombies or aliens or anything, focus on the gameplay. So what can we do to give you a different gameplay experience. This is long before we came up with the aliens, in a sense. It was: zombies are a different gameplay experience because of the way they move, right? So what could we do that would be a different way for the thing that we’re going to fight, to move through the levels and it was pretty quickly easy to figure out – well what if we had these creatures that are able to jump around and climb up walls and come from places that you’re not expecting necessarily and hit you from all sides and be an intense, chaotic, crazy experience that felt very different from the normal gameplay. Who made that leap from creatures to aliens?

Well as a team we all did it. It literally started when we were coming up with the idea of something that’s moving around like that, it was like “okay, it should probably be an Alien” but we didn’t really have anything other than that. For gameplay, we actually just made like a box or something – just a basic model, that wasn’t anything in particular – and just kind of jumped around. Because we wanted to make sure first, that the gameplay of shooting something that’s moving like that is fun. If it’s frustrating and annoying, and not fun, then we’re just not going to do it. So, concentrate on that and then once that felt like it was going to be fun we got our artists to start to create what these creatures would look like and came up with the alien that you saw. The back-story part of it, I think is something that we’re only teasing a little bit here, and then I think we’re going to potentially develop that further in other maps.

Okay, so we’ll find out more about where these Aliens actually came from, and that kind of thing?

Yeah, and a little bit more about them in general. It would be a good guess, if one were to guess, that we will do some DLC based around that.

It seems like Ghosts is a “more bang for your buck” kind of game. You’ve got all these different modes in here now, a lot of things we’ve never seen before. But Survival is back, as Safeguard, with a few changes. You mentioned that you don’t buy weapons any more, they’re random drops. Also, the biggest feature for me, was that it’s now four player, rather than two player. Which was something that we requested from MW3, so is that why you changed that? Was that community feedback?

Yeah, on Safeguard definitely. Four player was something that we had actually wanted to do with MW3, but didn’t have the time to get that to work. So getting it to work for Ghosts was definitely a priority. We prefer four player if we can, it worked out really well in that mode. So our player became a priority for Ghosts in general. And yeah, that really came from a lot of feedback. A lot of people wanted four player over two player. And Safeguard is just one of the new Squad modes you’ve introduced. Who are the Squads modes targeted at? Who do you think is going to play them?

That’s actually a tough one. It’s been a tough part of our PR campaign, trying to describe and figure out who we’re talking to on each of those modes. But, I think we’ll see two groups – and it depends on the modes, but Wargame, Safeguard and actually Squad Assault to a certain extent too, I think will cater to guys who might not really be interested in the competitiveness of MP. Who really have not ever just felt like that was something they wanted to get into. This allows them to, we think, get the gameplay experience; get the fun of what it is to play multiplayer, without that competitiveness. Without the competitive challenges, and that environment. Maybe you’re not a great player and you always end up not doing so well, when you go out and play multiplayer. Well this is an area where, with scalable difficulty on the AI, you can go in and have a good time, feel like you’re being successful and you are, because you actually are levelling your MP characters.

That AI is quite tough, as well…

Yeah, the stuff that you played it was actually set quite high. So it normally wouldn’t be that hard. But also, one of the things that we haven’t done with that setup right now, is setting the difficulty levels. So it’s just one difficulty. We’re still trying to see, because this is all playlist changes that can happen after launch, but we’re still trying to figure out if we want to have like you match-make in and the difficulty is either set already. So I match-make into a hard game, or an easy game. Or do I match-make in based on your skill level. So we’re still working on that, but we think that those kind of modes can really cater to those kinds of people. People who maybe wanted to just play Combat Training, from Black Ops. Who like MP and want to play, but don’t necessarily want to get into the competitive online section of the game. I think the idea of having each separate load-out with their own ranking system, is going to appeal to the hardcore. When you prestige on one, you’re going to want to prestige on them all.

Yeah, some people were talking about in Black Ops II for instance, the Claymore unlocks at 55, and at 60 you’re ready to prestige. So you only get the Claymore for 5 levels basically. So I’m hoping that the whole flat progression system is something that really appeals to the long time players. Also, it has two things really: the guys who have been playing for years don’t feel like they have to grind in this game, to get where they need to be, they can kind of get there quickly and then the new players who are afraid that they’re going to be outclassed because they haven’t unlocked the stuff at the higher levels – which isn’t the case, we purposely don’t make the best stuff at the end, we kind of flatten it out, so you get good stuff all the way, so that there isn’t necessarily an actual advantage to being a higher level, it’s really skilled. It’s about your skill. So a level 3 highly skilled person, is a highly skilled person, regardless of how many weapons he’s unlocked. But it does at least take away that perception hopefully, that people can get whatever weapon they think is the best weapon right away.

There are maps like Octane and Freight that are very “Modern Warfare”, very traditional  and that’s great. But then there’s Stonehaven, which is completely different.

I’m glad you caught on to that, because that was a very specific goal, early on in map development. The classic Call of Duty map is the 3-route or the circle-route map. 3 paths, one middle, left, right. It’s a very known formula. And we wanted to make sure we had that, that’s why Freight and Octane have that. But the designers set out to try something new, which was to make organic maps; maps that don’t necessarily fit that mould – that have a very different feel and flow through them. They still get the opportunity to support multiple weapon types, but it does definitely give you a different feel and flow for the maps. Whiteout is another that’s kind of like that. But yeah, that was definitely done on purpose. To make something new, from a map design that we haven’t seen.

So the key thing is, have you killed somebody yet with the gate?

No, I didn’t actually realise I could move the gate until after I came off the level, so I need to have another play.

That is my favourite thing to do. Such a bad thing, because I’m not normally the guy who ever trolls or griefs people, but this one is kind of my thing. Like if my team spawns over in the castle and everybody starts running towards the objectives or whatever, I’ll often let a guy run in front of me, wait, and then shoot the gate as he’s about to go through. It’ll smash him, kill him.

Yeah, but it’s kind of funny!

Yeah, and they all have their own character, too. Not just from visuals, which they have that as well, but they’re very characteristically different gameplay. And things about them, whether it’s a big dynamic event like Strikezone, or I actually like the stuff that’s on Freight. I don’t know if you’ve noticed there’s an underground passage, and there’s doors you can close and open.

I’ve played with the KEM strike, that’s the biggest one isn’t it?

Yeah, that’s the big one.

A bit of a technical question: I know if we play on current gen, we can save our profile on our COD ID and use it on next gen, but if I play on Xbox 360 and buy a PS4 will my COD ID carry across?

Unfortunately it won’t. The first parties – the consoles – don’t want that to happen. We weren’t allowed to do that.

You can go back and forth as often as you want. You can start on Xbox One and take it to your friend’s house on Xbox 360. It doesn’t matter, it’s just one set of data, for both platforms. No matter where you are.

One question we like to ask every guest we interview: Tomato ketchup, fridge up cupboard?

Fridge. Although I don’t eat ketchup. I’m a mayonnaise guy.

Would definitely risk it, for a chocolate biscuit.
MORE LIKE THIS
ActivisionCall of DutyCall of Duty: GhostsCoD: Ghosts