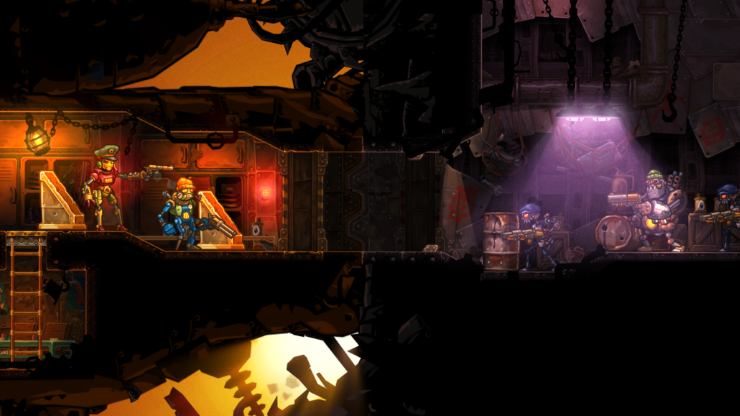 Image & Form must be pretty busy, right now. With SteamWorld Dig just having hit PS4, they are also beavering away at their 2015 title, SteamWorld Heist.

Steam Powered Giraffe is working on the soundtrack for Image & Form’s anticipated multi-platform space strategy adventure SteamWorld Heist, due in spring 2015. The quirky San Diego-based band (that just so happens to feature humans parading as antique singing automatons) will not only make all the songs and in-game music for SteamWorld Heist, but will also be featured in the game as a troupe that Captain Piper and her crew encounter in bars while recruiting fighters. Image & Form CEO Brjann Sigurgeirsson is happy: “A SteamWorld game about steam-powered robots featuring real-world steam-powered robots. It’s perfect!”

In addition, while out in the field on a heist mission, you’ll be able to collect sheet music containing Steam Powered Giraffe songs which you can later play on a jukebox in Captain Piper’s ship – thus allowing you to select which tunes grace your ears as background music.

This match made in steampunk heaven came as a stroke of luck. Brjann elaborates: “I met with SPG at E3 in June to seal the deal, and since I love their music I have to admit I was a bit starstruck. But it turned out they loved our games as well. We’re very much alike, childish and pretty resourceful. They wear a bit more makeup at times, is all.”

The band agrees: “Luckily, make-up aside, our mechanical cog-filled hearts were in synch. When asked if we would like to collaborate with Image and Form on their next SteamWorld game we immediately said yes! We loved SteamWorld Dig, and a steam-powered robot band making music for a steam-powered robot game? Count us in!” says David Michael Bennett (The Spine) of Steam Powered Giraffe.

David is positive about working with Image & Form: “It’s a unique and enjoyable experience for the band. There is definitely a ton of passion going into the game, from them, from us, it’s a labor of love and we personally can’t wait to share our contributions to the game with the world.”

Below you can see a music video for “Prepate for Boarding”, the first song from SteamWorld Heist.

Editor-in-Chief here at GodisaGeek, I organise almost every bit of content as well as running our weekly Podcast, and being the lead producer on our YouTube Channel. That means I'm very busy and sometimes grumpy. Yay!
MORE LIKE THIS
image & formSteamWorld Heist