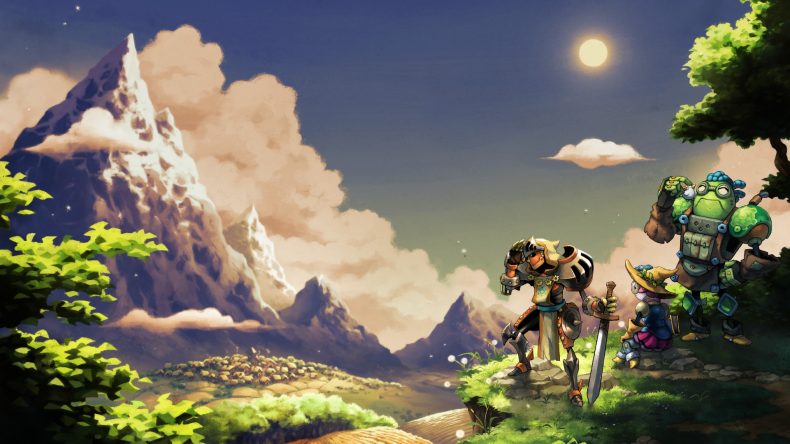 It’ll be six years this year since Steamworld Dig was brought to the world. That was a delightful little Dig Dug-esque game that I loved so much I completely waxed lyrical about it on a blog that I was running at the time. The steampunk-robot aesthetic and consistently good quality has come to define Image & Form’s output. In Steamworld Quest the team are once again trying something new with a tale of knights, wizards and dragons and I’ve been itching for it since it was showcased on the Nindies Direct back in January.

Here we follow Armilly, the daughter of a family of grocers who has designs on being a hero, but the local heroes guild full of hard headed incompetent men won’t let her. After helping her friend Copernica procure a mushroom from a forest the duo return home to find an evil army has laid waste to their village and through an unofficial mission to rescue the village’s guild members they find themselves on a quest to put a stop to the wicked machinations of their world. Story aside, this is a turn based RPG card battler, each turn sees you draw cards and playing them to commit actions. Three cards can be played per turn, while this may not seem like a lot it does actually allow for a considerable amount of tactical freedom. Each character has their own deck with some actions being free and others costing SP (a series of cogs along the top of the screen) to commit. SP is gained by performing actions that are “free” such as regular attacks or certain defensive actions. By playing your cards right you can perform some quite devastating attacks.

Fights are long-winded affairs even in the early stages with enemies boasting significant health pools right from the first fight against a group of Coglins. Because of this I found a semi-defensive but hard hitting attack deck to be quite effective. I equipped Copernica with cards that allowed me to attack gaining SP and extra card draws for my next turn, and because if you play three cards for one character in a single turn you can activate a chain effect, in Copernica’s case she would cast a mana shield over my party meaning that I wouldn’t need to heal so much, and considering many latter fights see enemies that hit multiple times or deal damage on physical contact, it came in very handy. Something that’s common with card based battlers is that you can find yourself unable to perform actions due to a poorly dealt hand, and it’s a concern I had going in here, but from start to finish it’s just not an issue. You never run out of cards, with the draws constantly circulating round, and you can redraw single cards twice per turn, always giving you a chance to perform some kind of action. There may have been the odd occasion where I only performed one or two actions rather than the allowed three, but I was never stuck for a move. In a nice touch, recovery items are played as cards but are not part of your hand, meaning that if you are completely stuck you can always perform emergency healing in desperate times.

Using the deck rules to your advantage are great, and building up a defence before setting up elemental weaknesses and bleed effects will see you win the majority of fights slowly, but easily. In chapter three there are some hard enemies that crop up which will wipe you if you’re not careful, but a brief bit of grinding in this one chapter alone will stand you in good stead for everything else later. This moment of grinding is the singular bit I did, and if anything it was just to ensure I got my tactics right for that particular unit (one that boasts a high defence before exploding causing high damage to all party members). To aid in grinding the game has statues of Gilgamech dotted through its locations which, while replenishing health, will cause enemies in the nearby area to respawn – a good idea, especially in chapter three. This really is the only avenue for grinding, as while the game does allow you to replay chapters the XP gains from defeating enemies in this repetition is considerably lower than what you get during your first playthrough. Going back and doing chapters again should be reserved only for picking up treasure you miss the first time through, and you’ll know this because the summary screen at the end of a chapter will inform you of the percentage of treasure you acquired, chests can contain items and even new card actions so going back to try and get everything is worth it if you can.

You only need to look at the screenshots to see that Steamworld Quest is a beautiful game, the hand drawn art is stunning, characters are beautifully chunky and the backgrounds are gorgeous. Armilly is a great lead character, she always has a smile on her face even when facing seemingly insurmountable odds and the cast that surround her compliment her so well. Copernica and Armilly won’t be the only members of your party for the whole games, the burly fighter healer Galen joins you early on, too. My tactic I mentioned earlier though was too effective, so I never changed my party from the original three members, but change things up if you want to, trying out new and different things is never a bad thing.

The card system doesn’t have any of the weaknesses these kinds of battlers sometimes have, it looks great has a good story and memorable characters. If I was to criticise Quest at all it’d be for music that doesn’t really make much of an impression and the aforementioned miserly XP gains from re-doing chapters. I’m being incredibly picky there as those factors won’t hamper your enjoyment of what is another wonderful game from the team at Image & Form, a group that are fast becoming one of my favourite developers. You really should make time for this.

A delightfully whimsical steampunk-RPG romp and you’d have to be malfunctioning to miss out on it.

You may also like
image & formSteamworld Quest: Hand of GilgamechReviews