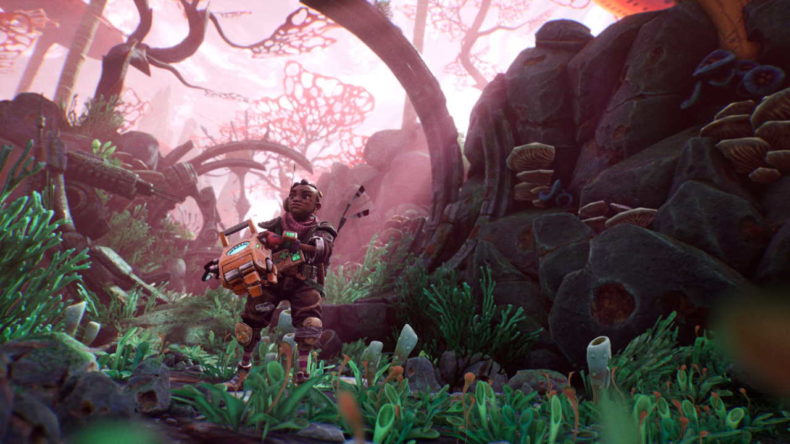 It’s been a busy end of the year for Xbox owners. With Forza Horizon 5 and Halo Infinite releasing in November and December respectively, there’s been plenty to play for the many of us with Game Pass subscriptions. Many a Game of the Year list is getting a last minute shake up, and with The Gunk just around the corner, the winter gaming isn’t stopping any time soon.

When down on their luck space explorers Rani and Becks land on a boring looking planet, they soon discover a mysterious substance they name Gunk and decide to investigate further. After cleaning up some of the disgusting ooze with Rani’s vacuum, the area suddenly bursts alive with beautiful plant life and a pool of liquid appears. Upon scanning the puddle Becks discovers it contains a ton of energy, and thus begins an adventure that could end the duo’s money problems for good.

The gameplay of The Gunk is relatively simple, and involves you going from area to area cleaning up the titular grime and gathering materials. Sometimes you’ll need to jump from platform to platform. Maybe you need to climb a vine or create a mushroom staircase. But the real pull is getting to explore more of this mysterious planet. 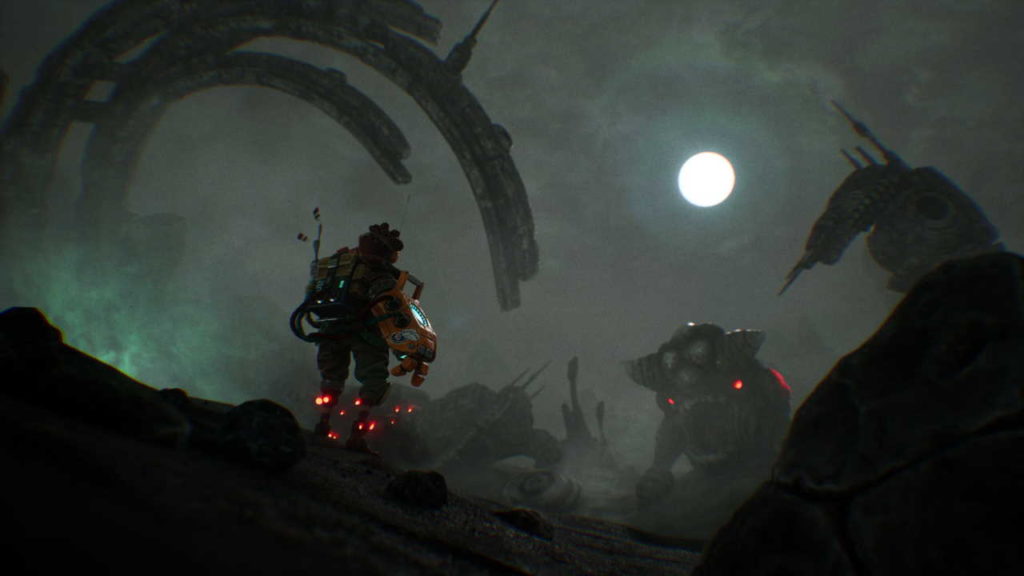 Almost immediately you’ll be hit with how atmospheric the world around you is in The Gunk. The dark and desolate Gunk infected world feels oppressive and so alien at first. When you clear away the slime, though, you’re left in a paradise of bright colours and bizarre fungus. Every new plant, shroom, and substance you come across can be scanned for more information, and the more you scan the more abilities you can unlock to make exploring easier.

Basic scanning and sucking is all you really need to make your way around the first few areas of the game, but after discovering the ruins of an ancient civilisation and a few ooze based monsters you’ll need to upgrade your arsenal. Once you’ve collected enough metal shards, organic matter and natural fibers, you’ll be able to craft all sorts of upgrades. Some are necessary to proceed. Others just make cleaning up Gunk or moving around easier. Early on you’ll unlock the ability to pull seeds and bombs out of the ground to help you progress. Later you’ll get an energy blast that activates long forgotten mechanisms. It’s all fairly simple, but is a satisfying way to propel you forward in the adventure. 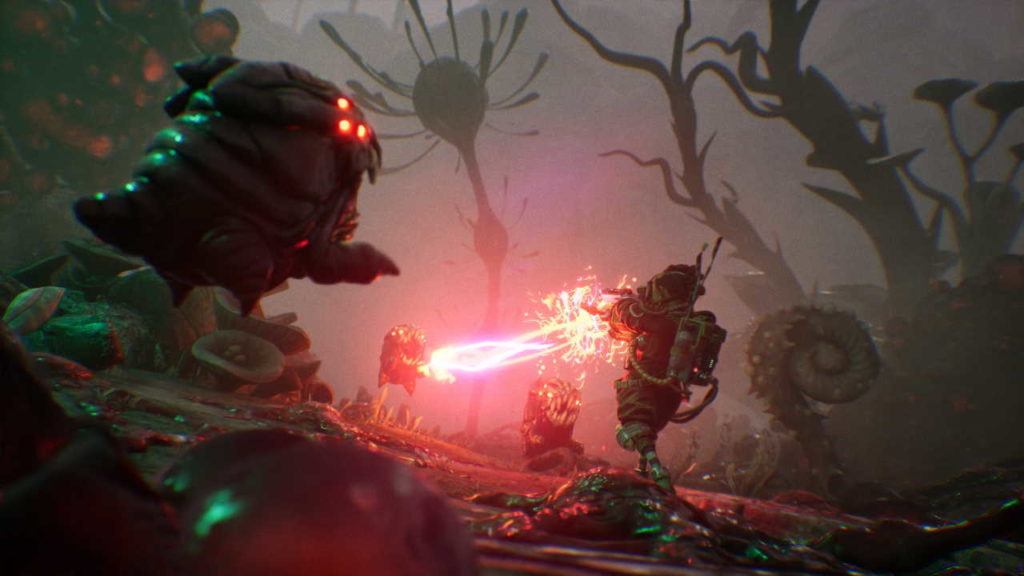 Alongside all the exploring and collecting, there is combat in The Gunk. After an hour or so you’ll bump into your first little Gunk-based pest, and later on you’ll find a few others trying to ruin your day. Unfortunately none of the baddies are particularly original or exciting to fight. Waiting for a charging enemy to run into a wall or catching and returning projectiles just doesn’t cut it. Early on enemies barely register as a nuisance. But even the bigger threats towards the end of the game are pretty easy to deal with. There are health upgrades and distraction projectiles available to help with dispatching aliens. There just really isn’t a lot of need to use them.

Not a Steamworld game

If you’re a fan of Image & Form’s Steamworld games, you’re probably coming into The Gunk hoping for interesting mechanics and moreish gameplay. While there’s nothing “bad” about the The Gunk, the overall experience just feels a little lacking. Platforming is never really supposed to be a challenge, puzzles blocking your way never require you to do more than growing a mushroom or two, and combat is threadbare at best. 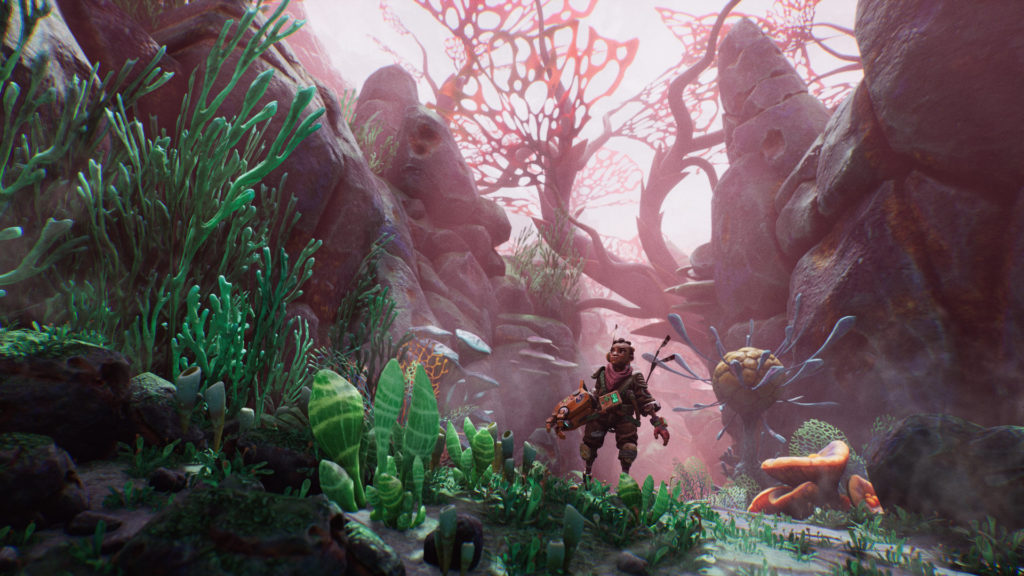 Exploration is certainly compelling to begin with, for sure. After exploring and scanning plants in the first couple of areas you’ll quickly realise you’ve seen a lot of what The Gunk has to show you. I was hoping for that Metroid Prime style appeal of scanning throughout my adventure, but less than a couple of hours in I’d practically filled my encyclopedia.

One aspect of The Gunk that doesn’t disappoint though is the characters. Rani and Becks have fantastic rapport, and their friendship is really relatable. Rani is constantly on the hunt for adventure, whereas Becks is grounded in the reality of their monetary situation. This clash of personalities makes for some good back-and-forth over the radio. As the adventure progresses both start to see the opposing point of view in a rather heart-warming way.

It’s worth mentioning how nice The Gunk looks. The alien environments are vibrant and appealing, and the characters and extra-terrestrial lifeforms are oozing with charm. Becks is definitely a highlight, with her truckers hat and Crocs giving her a style I can absolutely get behind.

The Gunk has a great setting and an interesting dynamic between the main characters. But ultimately the gameplay is a little lackluster. Exploring the world is enjoyable initially, but a lack of objects to scan and combat that is far too simple really brings the game down. If you don’t go in expecting the next Steamworld though, there’s still some fun to be had in pottering around an alien planet for the 4-5 hour runtime.

Combat is lacking
Upgrades are pretty unnecessary
Not enough to scan

The Gunk has a fantastic setting and lovely characters, but ultimately the gameplay is lacking.