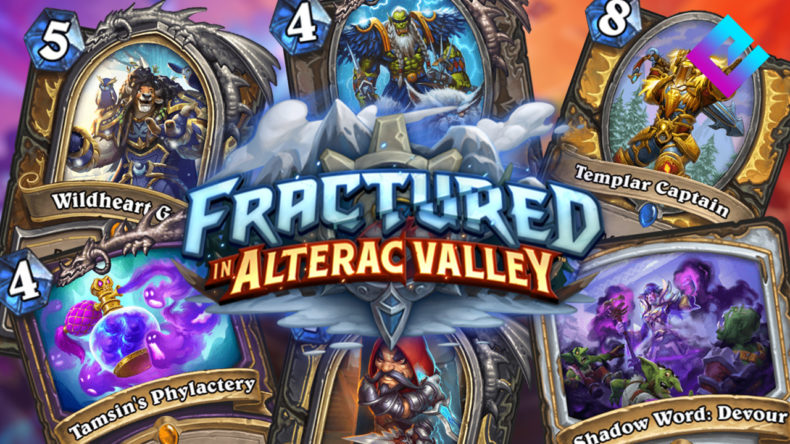 Hearthstone is in a funny place at the moment. Newer game modes like Battlegrounds and Mercenaries are almost universally loved, but the standard card game is facing some backlash because of the state of the meta. The days of controlling the game with huge minions and powerful spells are over, replaced by decks that aggressively charge you down or gather cards to kill you in one turn regardless of how you play. The latest expansion Fractured in Alterac Valley needed to shake things up to bring players back into the game mode that made them famous, but unfortunately not enough has really changed.

The theme of this set is the old Warcraft staple of Alliance versus Horde. In the famous snowy battleground of Alterac Valley, the two sides clash this time in card form. It’s kind of bizarre that Hearthstone has taken this long to release an expansion based around the faction warfare, and what it means for you card fans is that you’ll have to pick a side. Once you pick between Horde or Alliance you’ll receive a free legendary card based on your side, and can begin a reward track that’ll net you some extra cards if you beat enough of the other faction. It’s a fun system that makes every match where you queue into your rivals feel all the more important.

Obviously the cards themselves are the most important aspect of any new set, and there are some really fun new ones to collect. Perhaps the most powerful of these are the Hero cards based on Hearthstone Mercenaries, which (as with all Hero cards) replace your hero, let loose a powerful effect, and swap your Hero Power out for something much more impactful. Hero cards are always pretty game changing, and the ones in this set are no exception. 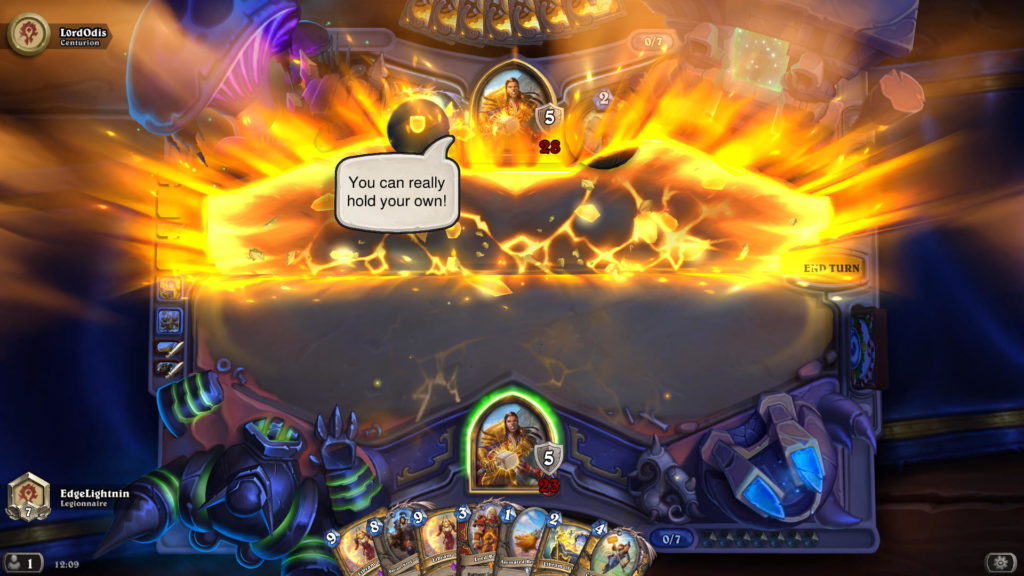 Paladin for example gets access to Lightforged Cariel, who equips a shield that blocks half damage for the rest of the game and has a Hero Power that buffs a minion in your hand by 4/4. The most impressive Hero is probably Dreadlich Tamsin, who draws Warlocks a load of cards and adds Rifts into your deck that summon Imps when drawn. Not every Class has a Hero card that’s particularly impactful at the moment, but all of them will likely see some use in the best decks throughout the next year.

The new keyword for this set is “Honorable Kill”, which rewards you for killing an enemy minion by dealing damage that’s exactly the same as its health. Hunter’s new Bloodseeker weapon showcases this nicely. It’s a fairly standard 2/2 weapon with an Honorable Kill effect, so if you can hit that sweet spot it gains power and durability for the continued killing of all your opponent’s minions. It’s a clever new mechanic that’s harder to take advantage of than you’d think.

The main issue with the new Honorable Kill cards is that because it can be so tricky to get an exact kill on a minion, the effect needs to be worth it – and the majority of them just aren’t. This means you’ll either use the card without getting the bonus effect which makes it woefully underpowered, or leave the card dead in your hand for far too long. There are exceptions that are absolutely worth playing of course, but compared to some of the other impactful keyword introduced Honorable Kill is just a bit underwhelming. 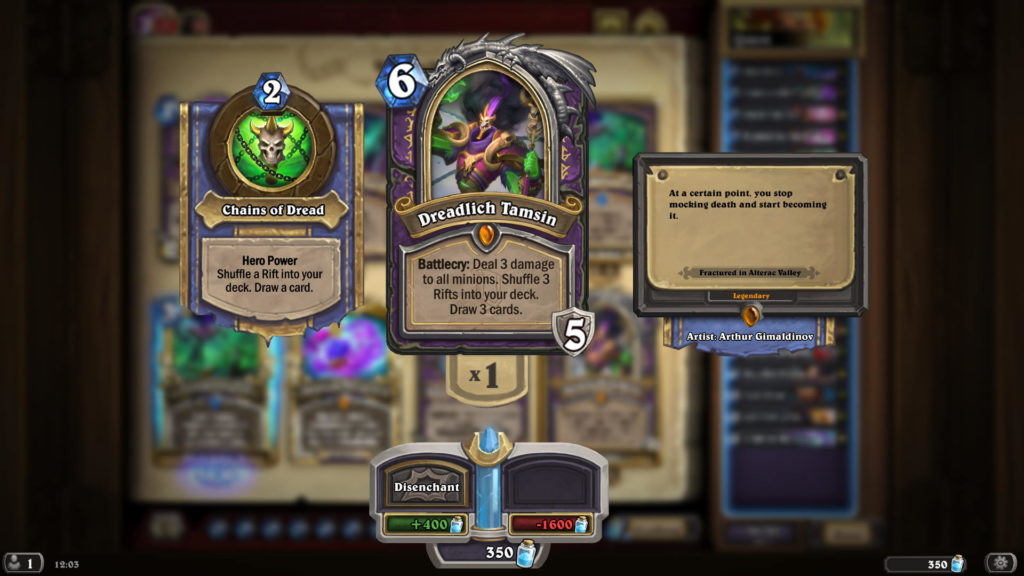 The final new card type introduced in Fractured in Alterac Valley are the Objective cards. These spells can be played to activate an effect that lasts 3 turns, and gold copies of them are handily earned by beating enough of the other faction to level up the new Honor system. The absolute standout of these is the Shaman Objective that summons a 3/4 Elemental that freezes, which is a perfect fit for new Freeze Shaman decks. Outside of that outlier a lot of these cards aren’t seeing a lot of play, and some are beyond underpowered. I like the idea of these temporary effects that can turn the tide of battle, but with so many powerful decks in the meta they just aren’t getting a look in.

That is unfortunately my thought on the set as a whole. Launched into a meta that turned some players away, Fractured in Alterac Valley just doesn’t shake things up enough. Out of all the decks I’ve tried and the hundreds of new cards I have access to, my best performing deck (Pirate Warrior) doesn’t contain a single card from Fractured in Alterac Valley. I can’t think of a single time this has happened in all my years of playing Hearthstone, and it’s sad because I’d rather play with all the shiny new cards. 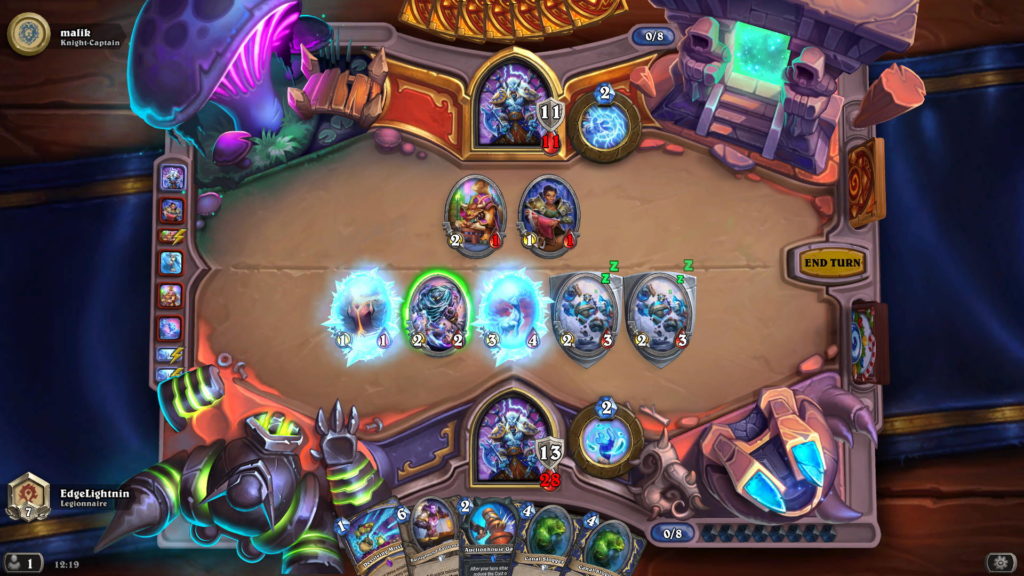 At the time of writing Blizzard have released a new patch to try and address the balance of the new meta, and so far it hasn’t really changed much. If anything my Pirate Warrior deck seems to be even stronger now, after not being hit as hard as other popular decks. I’m not necessarily an expert when it comes to top level Hearthstone play (far from it!) but so far I’m just not seeing enough of the new cards to say this set has only been out for a couple of weeks.

Fractured in Alterac Valley has a great theme and contains plenty of powerful cards that will certainly see play over the next couple of years, but ultimately it just doesn’t shake up the stale meta of the game. If you don’t mind playing slightly lower powered decks though there’s still a lot of fun to be had, especially with the new Hero cards that are as exciting as ever. Unfortunately if you’ve got sick of Standard Hearthstone over the last few months, you might want to wait for the next expansion and stick to Mercenaries until then.

Fractured in Alterac Valley contains some great cards and has a great faction warfare theme, but ultimately doesn’t shake up the stale Hearthstone meta enough.