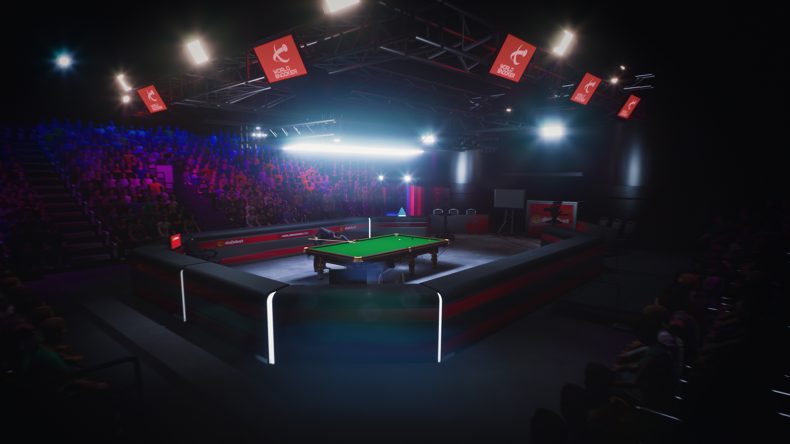 If there’s one thing you can say about the sport of Snooker it’s attention to detail. The pockets and margins for error in Snooker are so small that you have to be incredibly precise to build a break that goes into double digits. It’s a genre of sports videogame that died out a long time ago despite a brief dalliance with Wii waggle but now it’s back and in fully licensed glory.

Yes, the players you know (and many you may not) are here along with the tournaments they take part in and the arenas in which they play. It’s all presented in a tv style presentation that in a way completely removes all sense of interactivity from proceedings. So, yes, I’m going to skip the whole idea of talking about a storyline because this is Snooker, not wrestling. In Snooker you have to pot a ball and line yourself up for a colour that isn’t red but I’m not about to teach you the rules for the game here. This is a game that gives you lovely shiny balls, and a nice green virtual baize, but the attention to detail that the game of snooker requires is sorely lacking. The game’s tutorial will walk you through the three step process of lining up a shot, fine tuning and then executing it. In this you will use the tv presentation to aim, you’ll then use an along the cue view to fine tune yourself and then in the final stage flick the right stick down to set the power bar moving and the flick it again to finish the power in the set area kind of like Everybody’s Golf, albeit less intuitive. The thing is, this is all the tutorial tells you, it was only through going into the controls section that I found out there was a free look camera, until then I believed that the TV style presentation and the second view along the cue were the only points to line up shots. Not only that, but it doesn’t tell you how to set the power. To call it a tutorial is kind of an insult to tutorials. It would have been a good idea to take you through all the aspects of the game like safety play and playing shots softly, but there’s none of that here.

At least there’s a decent aiming line that stands somewhere between easy and hard, but if it’s not to your taste you can turn it off completely, although considering how difficult aiming is without it I wouldn’t recommend it. The line itself shows you how the white ball will travel after contact with an object ball including the effects of spin and power it’ll also show you the path the object ball will take to an extent, with a higher margin for error with fine cuts. Not only this, but if the power you play isn’t within the target range your accuracy will suffer.

All things considered this is a decent representation of the sport without the need to regularly chalk your cue and break building does feel good when you finally work into the point beyond half centuries. Thing is, you won’t find much else here. You can do exhibition matches, go into a career with a chosen pro or an up and coming rookie taking them through the ranking tournaments and aiming for the world number one spot. There’s also an online mode that currently has zero people playing it if the fact it would never connect is any indication. Finally you can play Snooker 6, a six red variation of the game made for quick matches but still generally the same game there’s no other cue sport here, this is solely a snooker experience, which isn’t necessarily a bad thing. You’ve got your licensed players, who while recognisable look more like Louis Tussaud more than Madame Tussaud waxworks, and generally the presentation is good, with a FIFA-esque front end, but some of the tournament screens contain errors like using the word ‘tournamant’ or (As was pointed out to me by Mr Cook) ‘5 August 2018th’, which isn’t a thing.

This is what I mean, there’s a real desire here to create the first big snooker game since the days of Jimmy White, and while Lab42’s work here is certainly admirable it’s just let down by a lack of attention to detail. The likenesses, the presentation, the lacklustre tutorial, and finally the commentary which over the course of a best of twenty-five frame match will repeat itself more than you’d care for it to. At the end of the day though, this is a budget release, it’s less than £30 and for that money we can excuse the odd imperfection just for the fact that we finally have a mainstream snooker game again. If you’re willing to put the effort in to learning how to aim with little help from the tutorial then Snooker 2019 may very well be the game you’ve been waiting for.

Never going to really appeal to anyone who isn’t a fan, Snooker 2019 is a decent representation let down by a lack of polish.

Snooker 19 is making its way to consoles

Snooker 19 lines up for Spring