previous
Catch up with Kingdom Hearts so far with a cute comic
random
next
Telltale's Game of Thrones Series Begins on Tuesday, December 2nd
0 comments

Super Smash Bros. for Wii U: Amiibo and You 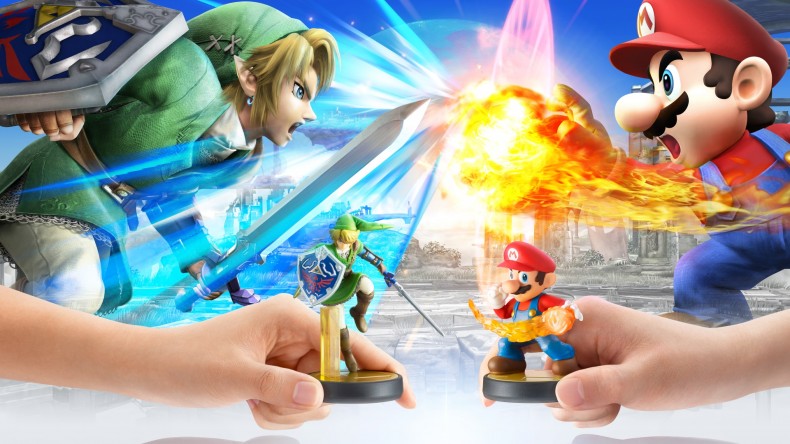 When I was younger, like many of my friends at the time, I was drawn into buying a Digimon. More than that, most of my year at school had the little things. We got Digimon because they were Tamagotchi that could fight, and we were all teens and almost teens that liked violence and stuff, so they were perfect.

I remember afternoons on the playground making the little guys scrap. Evenings spent scouring jpeg-plastered websites in search of secrets and glitches. Oh, and there was one fateful lunchtime that saw one friend and I babysitting another friend’s Digimon, overexerting it through too many battles, and then having to explain to him why, over the course of lunch, his pet had gone from destroyer of junior school dreams, to a shivering little egg. The fad ended not long after that…

Super Smash Bros. for Wii U’s Amiibo functions remind me of Digimon. Not in the ‘feed them or they’ll die’ sense, but a Smash Bros. Amiibo’s functions definitely have the same curious ability to imprint a sense of attachment upon you that the not-Pokémon-at-all Digimon could. That strange pride you get when they win a fight; the weird annoyance you feel when they lose – that’s all definitely here, and I know exactly how I’ll feel when Rinky Dink is fighting another person’s Amiibo. I know I’ll be back on that playground. Oh yeah, my Link Amiibo is called Rinky Dink, did I mention that? See, I’m already showing my attachment through the simple fact he has a name. I should point out that he has a name because Smash Bros. told me to give him a name, but I find myself referring to him by name and that’s definitely part of the attachment.

The first time you scan an Amiibo via the gamepad you can name them and choose which of the eight character colours they will don. As an aside, scanning is really quick, as is writing data onto them after a play session – at most you’ll be holding the figure to the pad for about four seconds. Once named and clothed you can alter their special moves if you’ve unlocked the alternate B attacks for that character and you’re given the ability to feed your Amiibo equipment you’ve gathered, but chances are you’re just going to take them into a scrap as soon as possible.

Level one Amiibo are atrocious, but they level up fast with the cap being level fifty. As an Amiibo levels up you’ll see it improve. You’ll notice them get more aggressive, improve their shield timing, and generally be able to land more successful KOs.

Does an Amiibo actually learn techniques and moves from a player? I would say that right now I couldn’t confirm or deny that. Ideally I want to match Rinky Dink up against another trained Link Amiibo to see if I can spot any unique techniques or foibles, but I haven’t had the opportunity yet. I can assure you that an Amiibo becomes more proficient over time, and I can also say with confidence that Amiibo are superior to CPU opposition.

They aren’t simply superior in skill, either. When playing with some friends, we added little Rinky Dink to bulk out the player numbers, and I found it entertaining how my friends began to hold a genuine grudge against my Amiibo fighter. Was this simply due to his skill? I don’t know, but they seemed to blame his capabilities on me. An effect of the advertised learning, perhaps, but it was easy to tell that they enjoyed fighting this supposedly intelligent character more than standard AI, making for a superior experience. I’m confident it was, in part, to do with him having a name, and part due to me saying “I’ve trained him”, but the attachment is definitely real. Rinky Dink’s name was deemed worthy of cursing, and I definitely caught them glaring at the actual figurine, too.

As mentioned, there’s more to customising your Amiibo fighter than simply levelling them and choosing special moves, and this will likely be what guarantees their longevity for some people. As you play, you will find equipment, and this can be used either to customise existing characters for powered up customisation battles, or to be fed to Amiibo. Some of these powers add a special trait to your Amiibo, from their shield exploding on a perfect defence, to being able to jump higher, to starting a bout holding an item. You can add a maximum of three special traits to an Amiibo at any one time, but feeding an Amiibo any piece of equipment will also alter its attack, defence and speed stats.

The thing here is that you feed an Amiibo a stat alteration permanently, and you can keep doing it. Where customising actual fighters is a case of choosing three bits of equipment and being done with that customisation, you can keep feeding an Amiibo indefinitely (they’ll have to fight when they have a full stomach, but there’s no limit to how much you can feed them over time). These stat alterations boost one stat and lower another, so slowly tweaking an Amiibo’s traits and changing its special moves to optimise its capabilities has the potential to become a compulsive meta game, and will be what ultimately sustains interest amongst friend groups.

The only real disappointment with Amiibo is that they’re limited to the main Smash mode. Obviously when I say limited; you can still customise matches, alter items, choose between modes and what not, but it’s a huge missed opportunity that you can’t team up with your Amiibo for the co-operative modes, or battle them against other Amiibo online.

Are Amiibo essential to enjoying Super Smash Bros. for Wii U? Absolutely not. Are Amiibo a surprisingly compelling side attraction in a game already bursting with side attractions? Absolutely yes, but only truly if you know other people with them. While training an Amiibo from one to fifty may amuse for an hour or two, it’s really the strange swell of pride you feel when your AI buddy smacks a rival Amiibo, or a real life friend out of the arena that cements the Smash Bros. Amiibo as a truly intriguing oddity, and something completely unique next to the fully player controlled Skylanders and Disney Infinity.

Time will tell just how good these figure fighters can get, and whether battles between Amiibo can remain constantly interesting, but right now I’m about to go and scour png-plastered websites to see if anyone’s learned any secrets or glitches before lunchtime tomorrow. At least Amiibo can’t die…

To assist with this article, Nintendo provided a starter pack of Amiibo.

See multiple videos of Super Smash Bros. for Wii U in action on our YouTube Channel, like this one.

If writing ability was a flavour, I would be the warming embrace of apple and cinnamon - wonderfully familiar and pleasantly spiced. Ever the optimist, I spend most of my game time diligently failing at fighting games (BlazBlue and Persona 4 Arena being the preferred titles), Monster Hunter and Dark Souls. As you can surely ascertain from such preferences I'm a gamer at my most content when a title is punishing me, abusing my feeble abilities and forcing me to improve myself in order to overcome life affirming challenges. Feel free to question my opinions and such on Twitter, @Dalagonash, or find me on every gaming network available as Dalagonash.
MORE LIKE THIS
AmiibonintendoSuper Smash Bros for Wii U