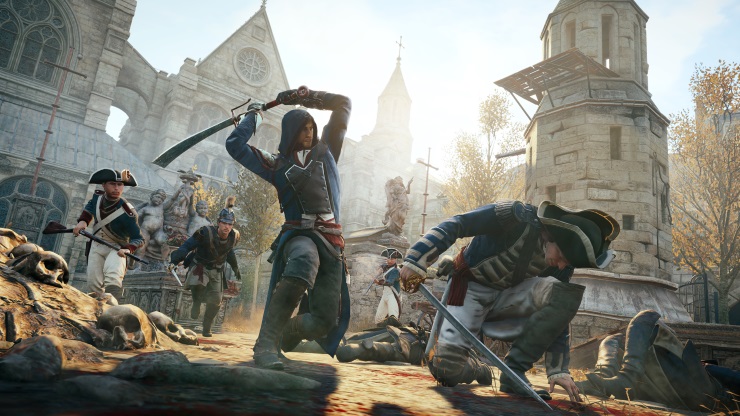 First up, let’s get this out of the way: I’ve long been a fan of the Assassin’s Creed franchise. I enjoyed the first one, and don’t think it was half as bad as it’s retro-actively viewed. But I do also believe the series plateaued with the second game of the second game. It was ridiculous at the time that a sequel itself was getting a sequel; Ubisoft went full Square Enix, but ended up producing the greatest game in the series in Brotherhood.

Forgetting the black mark that is AC3, Black Flag was a tremendous return to form – but only in as much as it was a very good video game. Just like AC3, it forgot the fundamentals that made the earlier games great. It forgot that the assassinations mattered.

There are numerous changes to the series that Unity propels to the forefront. Traversal has had a much needed kick up the arse, and rather than it feeling entirely automatic, there are two changes that make it feel like you’re actually doing something more than just holding the trigger down.

Firstly, climbing a building requires you to hit an additional button to jump upwards. A simple concept, and not a new one. It was only as the series matured that this was removed in the first place. Secondly, descending is now actually fun. No more accidental deaths from accidental leaps. Holding the trigger and A (on Xbox One) will free run upwards, but holding right trigger and B will free run down – it will descend. That simple removal of the descending barrier makes for a more natural free running experience, and while you still end up getting stuck (weirdly) on the lowest objects around, it’s altogether a better experience.

But back to those assassinations, right? Eventually, time changed the series and they became less and less memorable. You didn’t have to be stealthy; you could, in fact, just run up to a target and kill them, and then run away. In Unity, it’s about planning and options. If you want to “run and gun”, you still can, but the rewarding feeling gained from careful planning has returned, making each assassination a more meaningful experience altogether.

In the first major assassination, you need to get into a building. I won’t spoil too much here, but there are multiple entrances that can get you inside, and you can even use the front door if you manage to stealthily take out a patrolling guard and loot his key. Already, you can hopefully see the difference. A game called Assassin’s Creed suddenly takes pride in its unique assassination gameplay again. Once inside, you (again) have to carefully prowl, deciding to dodge or simply dispense of enemies who aren’t your target. And once it’s all done? Well you still have to escape, but those ways you got in also provide ways to get out. It’s interesting, and it’s actually fun.

The co-op also adds enormously to the experience. As myself and our reviewer (Mikey) hid atop a beam, staring at our target of a treasure chest, we used our somehow shared knowledge to silently air assassinate an enemy each. We then grabbed the treasure and disappeared into the smoky night, a few Francs richer. It’s a superb example of (and yes, I hate this phrase too) emergent gameplay, and it was a brilliant moment.

Unity isn’t without fault, though. Some will miss the naval combat, but focusing so specifically on Paris has allowed Ubisoft to create one of the most stunning visual feasts I’ve ever seen… with some caveats, of course. The frame rate isn’t good enough. It feels almost churlish to demonize Ubisoft for this, but maybe a few months’ more development time would have ironed out something that will (rightly) upset many. On Xbox One I experienced slow down in one specific section that was so bad, well, I can’t remember the last time I saw something that bad in a game. Overall, sure, it stands up well. But those times are unacceptable, and I get the feeling that Ubi know that.

I’ve played Rogue, too, and while it didn’t feel bad, as such, it felt safe. It felt rote. It’s Black Flag 2, and that’s fine, but I needed something new, something different. People used to complain at companies like EA for putting out the same FIFA every year with little more than a roster update, and Ubisoft may have been guilty of that with the AC series. But Unity feels like a clean slate. It’s not revolutionary, but it does feel like they’ve finally listened to complaints and actually addressed them, creating a building block with which to continue the series from, keeping the things that worked, and bringing back some of the things that made us love the franchise in the first place.

That, and nearly fifteen hours in and I haven’t seen an eavesdropping mission yet. Hallelujah!

Editor-in-Chief here at GodisaGeek, I organise almost every bit of content as well as running our weekly Podcast, and being the lead producer on our YouTube Channel. That means I'm very busy and sometimes grumpy. Yay!
MORE LIKE THIS
Assassin's CreedAssassin's Creed UnityUbisoft