previous
Halo 5 Beta Kicks Off, Limited Editions Announced
random
next
Opinion: The Year my Fiancée got into Gaming
2 comments

Opinion: How Splatoon Convinced me to Buy a Wii U 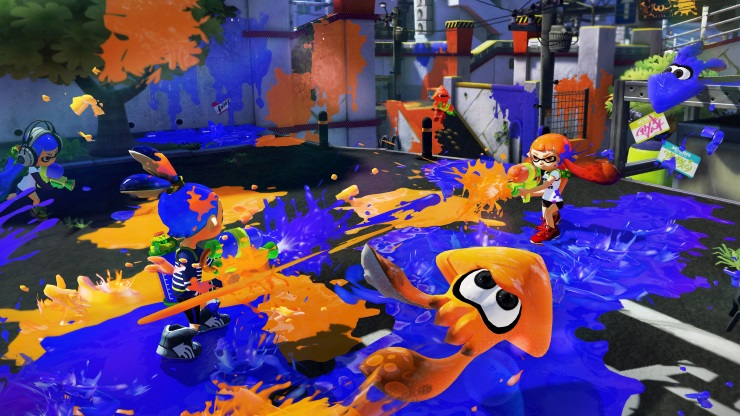 From the start I wasn’t even tempted by the Wii U. An unconvincing launch line up didn’t help things – although that didn’t stop me buying a PS4 (I’m such a hypocrite) – and the lack of third party support over its time in the market has been painful for the machine. If I was to get one it’d be due to first party support and, up to this year, for me, that had been lacking. While Super Mario 3D World, Mario Kart 8 and the HD re-release of Wind Waker (one of my favourite games ever) weren’t enough to convince me of a need to purchase one.

September the 27th of 2014 was the day that finally convinced me I needed a Wii U. I love Nintendo, and had been tempted by the odd title, but never enough to follow through. Then I went to the Eurogamer Expo (EGX) and I came away convinced. In a way it was probably fortunate that I got to play what I did. I had played Bloodborne, The Order: 1886, and Shadow of Mordor, but the queues for these were rather long, trying affairs. Nintendo’s stand was packed, and rightly so. The broad range of titles they gave us to play were richly coloured and much nicer to look at than the array of browns and greys amongst many of the other booths at the show. It was two games of their offering that really stole the show for me.

We’re well aware of the praise heaped on Bayonetta 2, and being a big fan of the first made me feel I’d like to play the second, but I wasn’t sure I’d be happy to buy a Wii U for it. Playing it at EGX set me off. I wanted it, it was ridiculously good, and I was buzzing. I only needed one more thing to push me over the edge, and that came about twenty minutes later. Nintendo showed Splatoon to the world in their Nintendo Direct during E3, it’s typical Nintendo: bright, colourful, well animated characters, solid, functional worlds, and it looks fun. For those not in the know, it’s a multiplayer arena shooter, in a way it’s a MOBA. It was probably inevitable that Nintendo would try their hand at this genre sometime. You are part of a team of four squidwomen that use funky guns to fire ink around a level with the single goal being to cover more of area in your team’s colour than your opponents. Your ink can be used to take out your rivals, and ink on the ground and walls can be used to speed up world traversal in squid form. It makes more sense when you can see it.

While waiting in the queue to play, my friends and I were split into separate groups and as a result were going to play each other. The reps did their best to create a competitive atmosphere (it came across a little embarrassing and many in the queues didn’t join in with the forced chanting), but when I got that pad in my hands I didn’t pay attention to anything else. Despite watching people play it while I was waiting in line, I wasn’t quite sure what to expect when it finally came around to my turn. But when the game started, it all just felt so natural. I haven’t used a control system that felt so right since Super Mario Sunshine on the GameCube. Back then, Mario just felt like he was an extension of you, making him move exactly as you wanted was poetry in motion. While Splatoon doesn’t have the array of moves Mario boasts of, the fact that the function of each button is just so rightly mapped to the controls is wondrous.

Fresh out of the blocks you and your teammates will proceed to coat the areas as you move through them, making sure you leave as few blank areas as possible as it’s all tallied up in terms of percentages by the end. If you run out of ink to spray, you simply press the shoulder button to change to squid form inside the ink to refill your supply. The added upshot of this is that while inside the ink, your movement speed is increased allowing you to traverse the areas faster (attempting to move through the opposing teams colour will slow you down significantly, though). I’m pretty sure I died once, I know this because when you respawn at the starting area you can choose to either walk out normally, or use the map on the gamepad to warp to any one of your team-mates who are still alive. Upon doing so, your squidlady flies across the arena and crashes down at the location you chose fresh for the fight. It helps to prevent spawn point camping, provided there are actually people on your team still alive elsewhere in the arena.

I was having fun, something that, while I love Destiny, I have yet to truly feel. The satisfaction of painting a wall blue, before spinning around popping an opponent and then going back to colouring my immediate area before squidifying myself and zipping to the next area to go again, is intense. Once you’ve hit a certain amount of territory coverage, you get a limited use strong weapon, and quickly popping off a round of these lays waste to pretty much anyone you line up in your sights, yet it never seemed unfair.

My enthusiasm for the game once my play session was over was probably helped by the fact that my team won, and I came top of the board by a considerable margin. Regardless, I don’t play competitive shooters much, and this really got its hooks into me. It was my game of the show and it convinced me that I needed a Wii U. If you’re not hyped for Splatoon, take it from me: you should be. It’s quite brilliant, and if you feel that there’s a lot of good software for the Wii U but have yet to find the title that is the tipping point for you, then let this be the one.

A lover, not a fighter and an all round good guy (he would say that, he wrote this after all), he's happy to be here as part of GIAG.
MORE LIKE THIS
SplatoonWii U

Splatoon 3 is as good as ever, with improvements all over | Hands-on preview