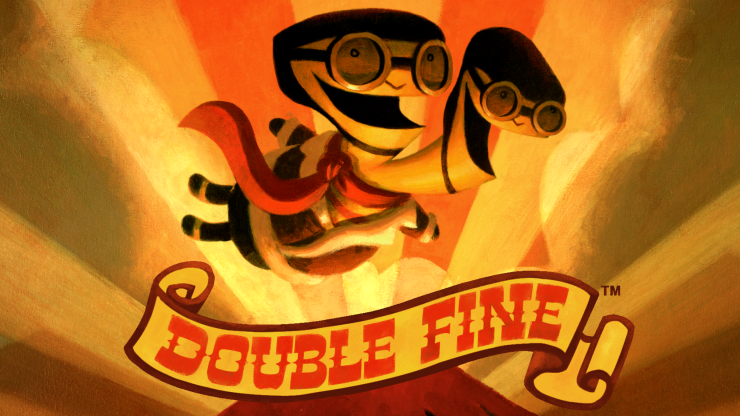 If I were to put together a list of my all-time top ten games, there would be at least three that Tim Schafer had a hand in. During his time at Lucasarts in the nineties, Schafer was one of the main creative forces behind the golden age of adventure games, being involved in seminal releases such as Maniac Mansion, The Secret of Monkey Island and, of course, his magnum opus, Grim Fandango. However, while his time since leaving the house that George built and establishing his own games company, Double Fine, has been full of creative promise and critical adulation, his past successes have never quite been replicated.

Indeed, such was the popularity of the graphic adventure games coming out of Lucasarts in the late eighties and early nineties, it seemed like the company could do no wrong. Eschewing the “save early, save often” mantra held by Sierra – where death and disaster lay around every corner – the team at Lucasarts created a solid string of hits where comedy and great writing were prioritised over punishing the player for every mistake they made. This didn’t mean that their puzzles were any less tricky, either; in fact, Lucasarts games tended to involve some of the most complex and technically interesting puzzles ever found in the genre, including time travel, cause and effect, puzzles based upon the writings of Greek philosopher Plato and, lest we forget, the noble art of insult sword-fighting. But the lack of dead-ends and multiple death scenes did seem to allow the writers and designers more time and freedom to focus on crafting really original, creative and absurd characters and worlds for them to inhabit. As Tim Schafer moved up the ranks at Lucasarts, he was clearly afforded more and more rope to express his personal interests and influences, which culminated in the title that many believe is both the pinnacle of adventure game design and the the one that hammered home the final nail in the coffin for the golden age of the genre.

Grim Fandango combined art-deco design, Mexican Day of the Dead imagery and many cinematic references (most notably a large portion of Casablanca) into a truly epic four-year story. Despite the myriad different influences, all the different aspects of Grim came together to form an adventure full of intrigue, humour and suspense – which was probably the most cinematic gaming vision realised at the time. The production values were obviously very high, with great voice acting, a fantastic musical score and a massive story that kept you hooked for hours upon hours.

Critics adored Grim Fandango and were instantly taken with its fifties cinema sensibility. Protagonist Manny Calavera was the Humphrey Bogart of gaming, and Tim Schafer was being hailed as Orson Welles. It seemed that after his huge success with Day of the Tentacle, he was the golden boy, and even though biker-themed adventure Full Throttle didn’t set the sales charts alight, Grim Fandango was backed to go far. Sadly, the reception at retail got nowhere near matching the high levels of critical praise. A decline in the adventure genre coupled with the fast ascension of first-person shooters and fully 3D games were partly blamed, and the unusual subject matter only compounded issues, making Grim a difficult title to market. It suffered heavy losses and marked the end of big-budget graphic adventures for around a decade. With Lucasarts cancelling their story-driven games left, right and centre, such creative minds as Tim Schafer realised it was time to move on, and just a year after the release of Grim Fandango he set up Double Fine, his own development studio. Aiming to focus on creative titles, it would be five years of development and broken publishing deals before their first game Psychonauts hit retail shelves. Being a 3D platformer where each level is set inside the deranged mind of an unstable individual, the game is packed with both exciting visual and gameplay ideas. Some of the characters and mental afflictions that are brought to life in each stage are really unique and each stage is distinctly memorable.

Sadly however, shoe-horning all of these great ideas into a platform game engine – especially a fairly buggy one – did no favours to the game. The 3D camera was difficult to control and keep aimed at the action, and there were far too many sections where some really precise platforming skill was needed – something that has never been easy since games switched from two-dimensional visuals. On top of that, Psychonauts was a new IP that no-one had heard of, and it received no discernible marketing push as it was only picked up by the relatively small publishing house, Majesco. As such, Psychonauts floundered at retail – once again being the darling of the critics, but almost untouched by the general gaming public.

Double Fine have sadly suffered from several similar setbacks over the years, and oftentimes something that sounded like a sure-fire hit ended up being somewhat of a disappointment. Brutal Legend would be the most obvious of these: an action game set in an alternate demonic dimension ruled by Heavy Metal gods. Featuring an all-star cast of metal icons and Hollywood comedian Jack Black, this game was expected to really strike a chord with players. However, the baffling choice to play out most of the game as a poor Command & Conquer real-time strategy immediately turned off many gamers. It just wasn’t a fun title to play, despite all its audiovisual bells and whistles, and a slew of decent review scores couldn’t persuade them otherwise. This definitely suggests the idea that Tim Schafer is more of a writer than a games designer. His ideas sound great – and would probably make a fine cartoon series – but a lot of the time building a gameplay system to fit around such ideas is unsuccessful. Psychonauts and Brutal Legend both suffer from this affliction, as did Full Throttle, the biker point and click game from his time at Lucasarts, which never quite felt right being a puzzle driven title, spliced with hog-riding road fights and a demolition derby action set-piece.

Indeed, Double Fine have perhaps had better success with titles that Tim hasn’t designed. Stacking was a charming and intuitive Russian Doll puzzle game, while Costume Quest applied an American Halloween makeover to classic JRPG gameplay – these games were small-scale, inventive and fun to play: they just worked. The poor retail performance of Psychonauts and Brutal Legend actually did Double Fine a favour, in that they began to focus on smaller, self-published projects, rather than games that would be competing with triple-A releases. These games are cheaper to produce, quicker to turn around and can be tested on their target audience through events like the Insomnia Fortnight, where Double Fine designers write game treatments for fans to vote for. As a smaller, tight-knit development team, Double Fine can be more reactive and have even greater freedom than before.

Sadly, just when things were looking up, the reputation of Tim Schafer and his whole company was sullied further by the Double Fine Adventure Kickstarter debacle. All seemed well to begin with, when their project was funded within hours and several stretch goals were smashed into oblivion several times over. This was a true Kickstarter success story. But then delay after delay occurred, and we were told that the team couldn’t finish the game as they were out of money. A project that more than quadrupled its target was out of funds?! Rather than the embarrassment of asking for more money however, the game was hastily cut in two, with sales of the first episode earmarked to fund the second. Yet here we are, almost two years later, still with only half a game. Double Fine lost the faith of a lot of their long-time fans through this whole disaster. Perhaps some of these different failings are behind Double Fine deciding to now fall back on the very same success stories that gave them notoriety to begin with – what with the upcoming release of Grim Fandango Remastered and the announcement that a Day of the Tentacle re-master is also on its way. Having suffered from several of these less-than-stellar releases and the goodwill-killing Kickstarter mess, the company could be forgiven for wanting to back a less risky project this time around. A re-master of a popular title with a proven track record is a less costly endeavour, and already has an established fan base who will likely back the project no matter what.

And so it is a little upsetting that – despite the joy I will feel at being able to play through Grim Fandango and Day of the Tentacle in high-definition, and the fact that a whole new generation of players will be exposed to these classics of story-telling and humour – Double Fine are no longer working on the new, creative titles that they set out to. Although not all of their ideas will be success stories, I would much rather see two brand new games from a team of such great designers than two re-mastered classics. I will play them both of course, but I will be looking forward to their future projects with greater anticipation. One day, Tim Schafer will find the perfect medium with which to turn his fantastic visions into a video game, and I want to be there when that happens.

The PlayStation Plus lineup for January has been announced