previous
Dying Light: The Following Uncut Gameplay Shown Off
random
next
Tomorrow's Destiny Stream Focuses on The Dreadnaught and The Taken
2 comments

The Taken King Could Redeem Destiny 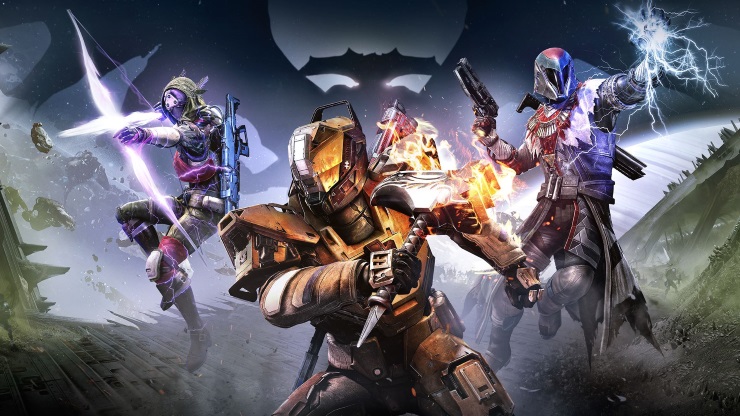 Ambition is a powerful thing. When combined with raw creativity and passion, ambition can accomplish wonders. Activision and Bungie know all about it. They know the joy of reaching for the stars, they know the elation of being carried there on the shoulders of their fans, and they know all too well the pain of plummeting back down to Earth, arm still outstretched, fingers still questing, for that elusive star they were destined to covet and lose.

Destiny has split opinion like no other game in history. It must hold some kind of record for occupying the top spot on lists of the most celebrated and most disappointing games simultaneously. It was called Game of the Year by some, a waste of money by others. It’s the most played game that no one plays. It has 20 million registered accounts, and ten million of those users hate the game with a passion, yet fire it up every Tuesday for the reset, every Friday for “Xursday“.

It’s a game that underdelivered, rather than underperformed, a beautiful slick shooter that soon peeled away to reveal an exercise in grinding. It’s an RPG-lite blaster whose Random Number Generator hates you and wants you dead, rewards the undeserving and ignores your desperate prayers. The very concept of randomness is a joke in Destiny, and the player is the punchline. It’s an abusive spouse, Destiny is. And we’re the suckers who keep going back because we think if we don’t, we’ll never find another experience like it. And you know what? We won’t.

The shooting is as well-implemented as you’d expect for a game bolting out of the same stable as Halo, but that’s not the only draw. The Strikes are excellent, the Raids too, although there are nowhere near enough of them yet. And the simple buddy-up system that just about makes up for the weird matchmaking decisions has led to millions of people not only teaming up with strangers to play a game, but actually making new friends. A community occasionally tarnished by unnecessary elitism has never let that negativity destroy it. I play Destiny with lots of people who complain about it, but they all love it just the same.

I have my reservations about the storyline. I complained with many others when the campaign finished and left me no wiser, when I had to go log into a PC or an app to read the deep lore of the Destiny universe. But when you hear Bungie talk about their ten year plan, you wonder if maybe you somehow missed the point. The story isn’t done yet, by a long shot. Unarguably, Bungie could have handled it better. They could have increased the tempo of the content drip-feed, kept us lean and hungry instead if starving and bored, but maybe it’s not as easy as we think it is.

The Taken King marks the turnover from Year 1 to Year 2, finally fulfilling the half-baked prophecy about the mysterious “Comet” event, a cataclysm that would one day change the face of Destiny. In it, we will face Oryx, the Hive God who fathered Crota, and his army of corrupted slaves. But it’s not the continuation of the over-arcing story, of the conflict between the Awoken, the Fallen and the Hive, of the plight of the Traveler, that has people excited for the Taken King.

It’s the changes, the improvements, that this expansion heralds. I’m not going to list them all in detail here, that’s already been done elsewhere, but I will say that each one is an indication that Bungie are listening. Not to the complainers, to the butt-hurts out there who want to nerf this gun or improve that drop-rate, but to the fans, to the community, to the people who ask questions. They’re overhauling the levelling system, making it less about gear and more about hours invested. They’re tweaking the guns, expanding the stash, both simplifying and deepening the quest and bounty mechanics. New PVP maps and modes, new Strikes and new enemies, the seed of what may one day become a fully-blossomed crafting system. New areas, NPC-specific questlines… But these things only account for a fraction of what The Taken King is. What it really is, on a deeper level, is the first major step towards Destiny realising its potential.

Destiny is not an incomplete game. Millions of people didn’t spend 200+ hours each on an incomplete game. But it IS an incomplete experience. It’s an unfinished symphony. The grand arc is still a work in progress, and The Taken King is the first section of a long road. If you walked away from Destiny, now is the time to return, to get a taste of what Bungie has in the slow-cooker.

I’m not about to pretend that Bungie haven’t made mistakes. The way they handled The Taken King’s price plan left a bad taste in my mouth, but not because of the cost itself. There’s also a complaint that the changes in the Taken King should always have been the norm, but that doesn’t carry much weight. You could say the same about any game with an expansion that improves as well as increases.

The truth is, Destiny isn’t yet at the point where we’ve seen everything it has to offer, it isn’t in a position to even hint at what lies in its future. But I’m OK with that; I’m OK with the fact that even after September 15th, I’ll be waiting for more Destiny. Because Bungie may have promised a revolution, but they didn’t promise a fast one, or a short one.

The Taken King could be Destiny’s redemption, or at least the tip of that particular sword. It’s a reason not only to keep playing, but to come back if you’ve already left and walked away. The Taken King might not be the expansion to tie off all loose ends and launch Destiny into the stratosphere where it so longs to be, but it’s a start. It’s the first step of the next leg. Just imagine what Year 3 will bring…

If you’re not a fan, or you’ve boycotted, maybe now’s the time to give Destiny a second chance. After all, if Bungie are trying to give us what we’ve been asking for, isn’t it churlish to ignore that? I’m not here to convince you – that’s Bungie’s responsibility. But I am here as a fan of Destiny, as someone who wants The Taken King to do well so that Destiny lives on beyond it. If by this expansion Bungie and Activision are asking for another chance to get it right, maybe they deserve that. Or maybe I’m biased. Either way, I hope that with this expansion, Bungie manage to ascend closer to their star-crossed ambitions and bring Destiny further in line with what we were promised all along. And if nothing else, at least Dinklebot is gone, right?

Senior Content Editor Mick has been playing games for over 30 years and writing about them for around 12. After drifting from site to site for a while, settling briefly at the now-defunct Made2Game and freelancing for the gone-but-not-forgotten NintendoGamer Magazine, he came at last to rest at Godisageek. Mick has been a reviewer, staff writer and content editor here for some time, while also moonlighting a little for Red Bull Games. He has 4 kids, has written 2 novels, and sometimes even manages to pay a bill or two. You'll usually find him defending the galaxy in Destiny 2, battling evil in Diablo 3, or lurking in the background on Twitter. Find him there @Jedi_Beats_Tank, or on XBL (JediWaster247), PSN (Jedi_Waster) or Nintendo (JediWaster).
MORE LIKE THIS
ActivisionBungieDestinyThe Taken King