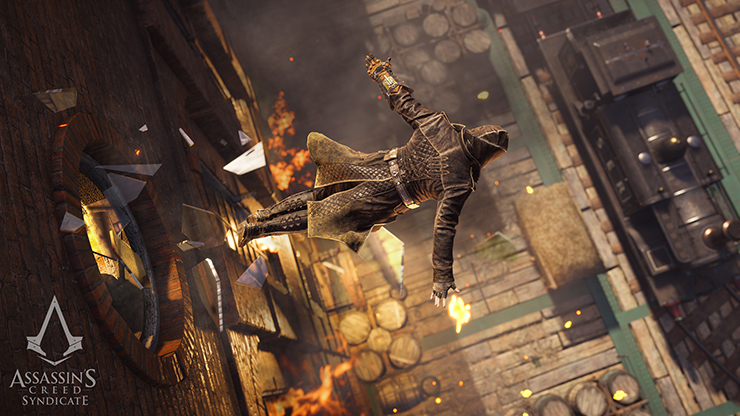 For many years, there has been a vocal crowd on this side of the water that have wanted to see Ubisoft take their crown jewel, Assassin’s Creed, to the land of the Mitchell brothers, Gabrielle and of course, the future king, Harry Kane. And would you Adam & Eve it, Syndicate, whilst set in the city of two geezers that serenaded us with tales of how mental they were about billiards, is still an Assassin’s Creed game.

That’s not a derogatory statement, just one of fact. In the limited time I had with new protagonists, the Frye twins, I had some good, wholesome, stabby fun. A lot of that was down to the dynamic between Jacob and Evie Frye. It’s almost like watching Keys & Gray in their pomp* — the bants was in full flow. Jacob is the no-nonsense bruiser, while Evie is a bit more measured in her approach toward situations. In cutscenes, this is evident as Evie is painted as the brains of the operation and will be seen taking the piss out of her somewhat ditzy, yet endearing brother. They feel believable as a family pairing, as do the most of the characters I came across. With two button presses, you can change between playable avatars, which isn’t entirely user-friendly, but you’re not trawling tabs in the menu, at least.

Evie’s more mild-mannered nature is meant to make her the more effective sneaking option, where Jacob’s gung-ho tendencies are said to give him a more powerful punch in combat. However, Evie was well able to take care of herself in a scrap, and Jacob wasn’t exactly stomping around when I was stalking an enemy from behind. Now, there are skill trees here for combat and stealth, which apply to their relevant character, so I can only imagine that once you’ve sunk some skill points into the relevant trees, you’ll notice a difference. Don’t worry about trying to gain XP for a lesser-powered Jacob, though, as the twins share experience points and cash. As has been the case for years, free-running and scrambling up buildings feels as automated as ever. Hold down the trigger, push the analog stick up, to the point where you nearly dislocate your thumb, and you’re sorted. But, the new Rope Launcher (Grappling Hook) gives you even more mobility. Like you would if you were wearing a figure-hugging, superhero outfit, standing at the foot of a structure and aiming at a high point will propel you, upwards. The better use of the Rope Launcher, however, is the fact that you can create links between buildings, which can then be traversed, rather than go to ground.

Rather than go for the jugular and end the life of a rival Cockney, one of the early missions introduced something a lot more enjoyable. One of my allies and member of The Old Bill, Frederick Abberline, tasked me with kidnapping wrong-doers around Whitechapel. You have the option to grab one of your dastardly foes and escort them to a mode of transport, in order to bring them wherever you so wish. A major problem has always been that the stealth has been terrible in the series. “Got seen? Who cares! Just kill them, it’ll be fine.” Well, there were a few instances where this felt to be improved, not rectified, but merely tweaked for the better. If you’ve decided to hold someone against their will, you have to be strategic. Run and you’ll draw more attention. If they get spooked and begin shouting, you’ll be spotted. If you’re driving like you’re late for mass on the road, you’re sure to grab the attention of foes, too. You actually have to take your time and be a bit more patient in order to perform a successful kidnapping, which in Assassin’s Creed, is very welcome. And yes, I’m aware how strange that sentence is.

In previous efforts, you’ve been able to mount your steed, or board a ship for choir practice, but the inclusion of horse carriages is not only a useful getaway vehicle, but also a way to hop, skip, and jump from one rooftop to another. On the road, these battering rams are paramount to aggressively nudge fellow drivers into oblivion and can also be utilised as a handy hiding place, but using them as platforms to practice your free-running is where things become interesting. At one stage, I had been spotted by a member of rival gang the Blighters and my health was dwindling at a rapid rate. Obviously, I began to leg it as quick as Evie’s legs would carry her. Thankfully, the sprightly, young parkour enthusiast began to use the roofs of 1868’s MOT-approved carts and escaped the beating being doled out. For the first time in quite a long time, being light on your feet feels important, but only in stops and starts.

There was one mission where I was tasked with freeing groups of children that were labouring in a factory. On first try, I carefully scaled the exterior walls, before landing in an opening upstairs. A Blighter saw me within seconds, knew I hadn’t transferred over from the marketing department and started to suspect I was up to no good. When the jig was up, he and his buddy started attempting to put me in a world of hurt, but I dealt with one of them, handily. The other lad, after just standing at the side, waiting his turn to get his face caved in, realised he could call on the cavalry by setting off the alarm, which he then did, and my demise came shortly afterward. On the second go-around, I made sure to be a bit more careful in my approach and freed the young ‘uns, without much hassle. There was a punishment for being seen, yes, but it wasn’t immediate enough. Why did that guy wait so long to set off the alarm? Surely, after seeing me and understanding that his colleague was attempting to deal with the situation, he should’ve ran downstairs and called in the heavies.

Apart from a decent brawl on top of a train, the rest of my time with Syndicate was very familiar. Go into an area and deal with a few baddies, then free members of your own gang, The Rooks, for example. And look, that’s what people have come to expect from the hooded blade-wielders. When you’re releasing yearly installments, it’s very difficult to yearn for more. It’s well made, looks quite nice, plays decently, and I’m sure Londoners will scour the streets of this virtual world looking for where their local cinema is now, but Syndicate, for all intents and purposes, is an Assassin’s Creed game. Make of that what you will.

*Keys & Gray are obviously knobs. I was only having the bants in paragraph two.