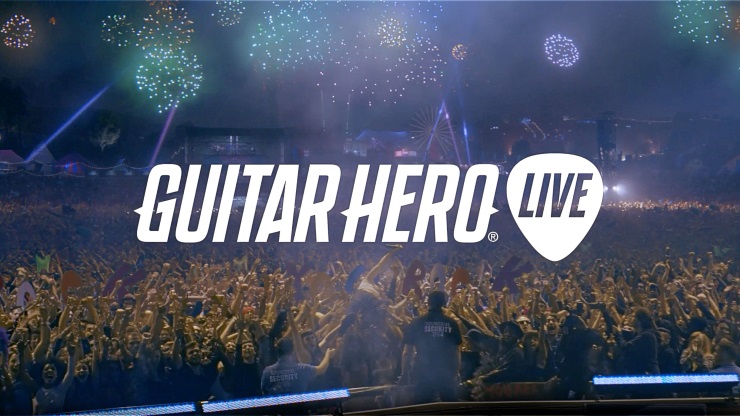 Jamie Jackson, Creative Director at freestylegames is an easy chap to interview. He’s pleasant, but honest, and isn’t afraid to use profanity, which is (for me, anyway) instantly endearing. Having played Guitar Hero Live fresh before I spoke to him, I was full of questions, especially because the cynic in me was previously screaming “A new guitar? Come on…”, but after some time with that new six button piece of plastic, I’m sold.

“When Activision decided to put the franchise on hold in 2010, Eric Hershberg said at the time that Guitar Hero is a much loved brand, but we need to go away and come back with something that has some true innovation, which we felt, at the time, the fans were asking for. We always said internally that when the game is right, when we feel it’s in a good place, we’ll come back. So it wasn’t like we picked 2015, instead we went away and tried to build something new, and when it’s right, we’ll bring it back” After playing it, I felt like the design of the guitar lends itself to a more realistic guitar feel. For example, playing two buttons in the same row at once feels like you should be fretting them as if it’s a barre chord. You could, of course, use individual fingers, but playing it as a barred fret felt right to the guitarist in me, and is, according to Jamie, the right way to do it. But is it supposed to feel real?

“It’s semi-intentional. We didn’t have this six button idea suddenly; we tried lots of variations on it. We found that so many people struggled to use their pinky (a lot of the expert players didn’t and that’s fair enough), but to those that struggled, it became a barrier they could never progress past. We never wanted to make a guitar simulator, it was about making a game. There are certain things where, if you’re a guitarist, you might think that it isn’t like playing a guitar. But it needs to give you enough of the feeling of playing a guitar, just like Destiny makes you feel like an amazing futuristic hero.

We had some bullet points: the first was that it’s got to be fun across all levels. And there, there needs to be challenge. So some songs might require you to move around a bit, but others, if you’re more musically minded, you get a feel of where it’s going to go.”

Something that playing Rock Band 4 made me realise, is that bringing back a beloved dormant franchise leaves you in a no-win situation. You’re damned if you do, and damned if you don’t. Use the old instruments so people can use all their old content, and people will say it’s lazy, and feels to similar. Create new instruments that people have to buy, and they’ll accuse you of gouging. How on earth do you stay sane through all of that?

“I could probably answer this one for half an hour. Thick skin is important, and you’ve just got to get over it. But you’re right: you’re damned if you do, and damned if you don’t. One of the designers in our room came up with button configuration changes, so they built this Frankenstein controller which used plastic cable conduit and remodeled it. It looked like a piece of shit. They presented it to us and we were against changing the gameplay. But they got us to try it, and it just felt really good fun. It felt like the first time I played Guitar Hero again. It made the fingers I was using on the button do things that felt like what I thought a guitarist does. All of a sudden we were physically doing something different that felt really good.”

“We went backwards and forwards a lot, but everyone here agreed that if we were going to change the gameplay, we had to nail it. The business side at Activision shared that feeling, but the more people that played it, the more we realised people enjoyed it. How do you make that decision? We just did it. We felt the fans wanted gameplay changes.”

The elephant in the room is FMV. There’s really only two types of them, badly made ones that you laugh at because they’re bad, and well made ones which are too serious and still make you laugh. It’s a hard subject to broach without seeming outright offensive to someone’s creative ideal, so thankfully as I trail off, Jamie picks up the slack.

“When you think about it, previous games are showing you on stage. You’re looking at yourself on stage – and we never necessarily questioned it, but it does seem strange when you say it out loud.”

“Even with the DJ Hero games, we never really questioned it. Then a member of the team said we should make it first person. Most people who play this game will never have the experience of being on stage, so his suggestion for direction was on the table. He also said we needed to get away from the cartoon-looks, so we came back and started to think about what we could do.” One of the things you become aware of, like when making DJ Hero, is how disconnected the background visuals are from the game. We spent lots of time making these light shows that built in intensity depending on how well you’re doing. Everyone who played it probably never noticed, but we spent so much time on it.”

But you’re looking at the lanes, aren’t you?

“Exactly, I always said you could put an elephant dancing in a tutu behind and it wouldn’t really matter. But we felt that Guitar Hero isn’t like a Call of Duty, you’re not running around doing these things. So we thought we could use these backgrounds to take someone on a journey. If we’re gonna go first person, why don’t we film it.

So we did a little test shoot where it didn’t switch between positive and negative, and the roadie came on to save the day. We went and showed everybody and they all said “Fucking hell, this is pretty cool”, but we felt the crowd needed to react to you. It was a hell of a journey, all stemming from a thought from the boss”.

GHTV is one of the biggest new elements, and it feels like it’s designed to give you a long tail. But there’s no DLC here. You can’t buy a song and it’s yours, instead you can play it once, then pay using in-game currency to play it again.

“We’d all started to migrate over to things like Spotify and Netflix, and when we thought about it, we just realised we don’t buy DVDs and CDs anymore, we just have services. We all consume things wherever we want, and don’t have to get off our sofas to do it. Connected consoles between 2005 and 2010 were around 40%, so the way to get content to people was to build another game disc and sell that. But now it’s nearer 80 or 90% that are connected, so it means we can give people content in a different way – and that’s what really birthed GHTV.

At the end of the day, the content is the music, and we wanted to give as much choice and as much new content as possible, and we didn’t feel like the DLC-way was the way to do it. We wanted to let people come in and say “I love that song” and play it twice, and then move on and play other content. So it’s about a platform that allows us to give the fans content without having to do another boxed game next year.”

Of course, being a gentleman of sane mind and body, Jamie keeps his ketchup in the fridge.

Editor-in-Chief here at GodisaGeek, I organise almost every bit of content as well as running our weekly Podcast, and being the lead producer on our YouTube Channel. That means I'm very busy and sometimes grumpy. Yay!
MORE LIKE THIS
ActivisionFreeStyleGamesGuitar Hero Live