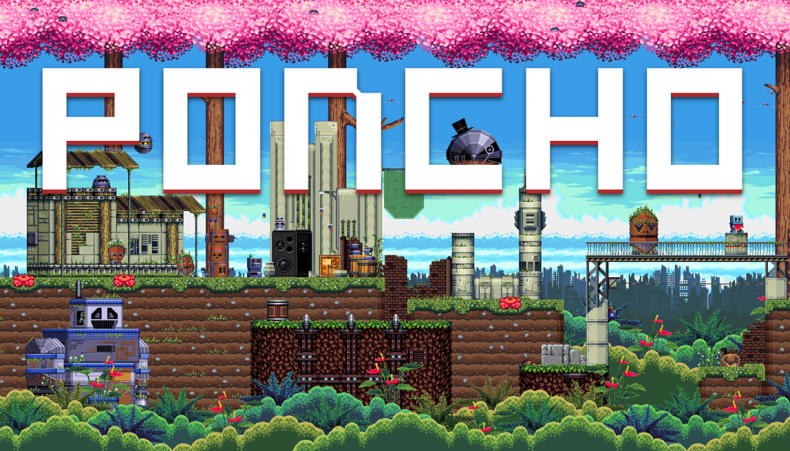 Rising Star Games have announced that their pixel-art platformer Poncho is now available on PlayStation, PC, Mac and Linux. They also discussed plans to release the game on PlayStation Vita as well as Wii U in the coming months.

An official descriptor of the game reads:

“A robot finds himself waking with no memory in a strange and desolate world, with nothing on his person but a strange and ancient artifact from a bygone era – a red poncho. The little red Poncho quickly becomes his namesake and our robot hero goes on a journey to discover what tragedy has befallen the world around him.

As Poncho, players can explore a beautifully animated pixel-drawn open world. Harness Poncho’s unique powers of depth, by hopping between the background, mid-ground and foreground in a giddy and unique blend of parallax platforming action. Use these abilities to effortlessly explore and solve puzzles as you jump between planes whilst traversing Poncho’s mysterious and immersive world.”

Jack Odell, composer and co-creator of Poncho said: “I’m so excited to finally be releasing PONCHO out into the world. This project has meant a lot to myself and Dan over the past 3 years and the soundtrack has been some of my favourite work to date. We really hope that people enjoy it as much as we loved making it!”

Poncho is available now via Steam, Humble Store and PlayStation Store for £10.99.

Currently an English, Journalism and Creative Writing student at the University of Strathclyde. Based in Glasgow, I spend most of my free time playing video games ranging from Japanese visual novels to horror games. You can contact me at greg@godsiageek.com!
MORE LIKE THIS
Indieplatformerponchorising star games