previous
Luigi's Mansion 3 has all the makings of a classic Nintendo puzzler
random
next
Splatoon 2 and Super Smash Bros. Ultimate European Championships begin in August
0 comments 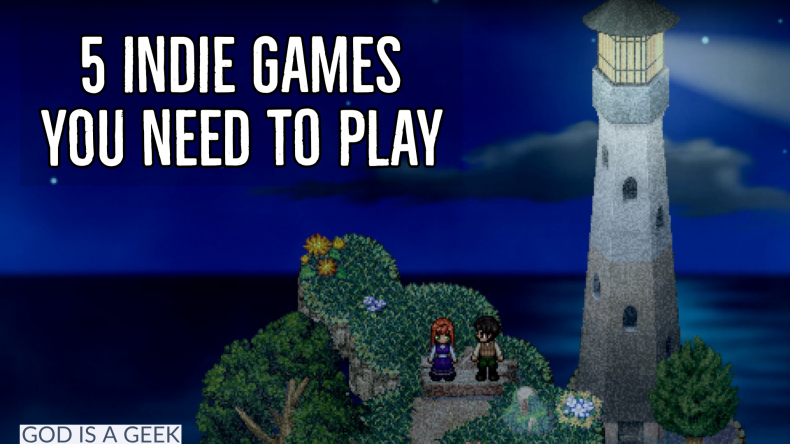 You may or may not know that I am a huge fan of Indie games, and I thought it was about time that I give you a few games that I think you need to play right now. These are games that have stuck with me for a number of reasons and are something you should give a go if you’re looking for something a little different. I’ll keep the list as spoiler free (and hopefully fanboying free) as possible so nothing will be ruined for you. Let’s get started shall we?

1. The Binding of Isaac: Rebirth

I love me a game where I can jump in and have a good old time without having to worry about where I left off in the story and Binding of Isaac, designed by Edmund McMillen and Florian Himsl, is just that. The Binding of Isaac is a roguelike dungeon crawler that takes its main premise from the Biblical story of the same name (minus the Rebirth and Afterbirth subtitles) where Abraham, who is being tested by God, is told to sacrifice his son Isaac. They’ve changed it slightly in that it’s Isaac’s mum who hears the voice of God and attempts to sacrifice him to show her faith.

Isaac manages to escape to the monster-filled basement where you need to fight your way through various level by using Isaac’s tears as weapons, as well as any items you find, and take out his mum to ensure his survival. If you’re not a fan of roguelike games this may be one to avoid but if you’re looking for something a little different you can dip in and out of this is definitely worth a go.

What can I say about Celeste other than how fantastic it is. Celeste, developed by Matt Thorson and Noel Berry, with art of the Brazilian Studio MiniBoss, is a lovely looking game that has a really interesting story regarding the main characters, Madeline, struggles as she attempts to climb Celeste Mountain.

Celeste struck a chord with me when it came to the interactions between Madeline and the dark reflection/Part of Madeline. On the one hand you have Madeline with her determination to climb Celeste Mountain and then Part of Madeline chiming in saying how she can’t do it and how she should give up. It’s an interesting way of seeing a visual representation of something that most people struggle with on a daily basis, obviously exchanging Celeste Mountain with whatever their struggle is.

I only played Dust recently, and by recently I mean in the last couple of years I think, but I wish I had played this on release as it is such a good action RPG. You play as Dust who awakens in a forest meadow with no memory of past events only to be faced with sentient sword called Ahrah and furry flying creature called Fidget who has the quite the sass going on at times.

Dust is a 2D side scroller, developed by Dean Dodrill, with the main objective trying to find out what happened to Dust and piece together his past while helping the residents of Aurora and the surrounding areas from the influx of monsters that have appeared.

We’ve reached the first of two indie games that, to me, are an absolute must play. If you’re ever considering of picking something up this should be at the top of the list. Rime is a third person adventure puzzle game by Tequila Works where you play as a young boy who has arrived on a mysterious island guided by a fox-like spirit with the main aim reaching the large tower in the middle of the island.

There’s so much I want to say about this game but it’s really difficult without spoiling anything. Each area in Rime deals with a different part of the 5 stages of grief, so it’s really not a happy-go-lucky trip. It’s one of the few games that has genuinely got me choked up as it’s such a sad game and there were parts that proper gut punched me. That reads like the wrong way to encourage people to play a game but unless your heart is made of stone the experience of playing through this for the first time will stick with you for a long while after those credits roll.

My top pick for you, if you haven’t already experienced it, would be To The Moon, developed and published by Freebird Games. To The Moon is about two scientists from Sigmund Corps who have developed a technology to create false memories and use this tech as part of a wish fulfilment for those who are on their deathbed. The scientist visit Johnny Wyles whose lifelong dream has been to go to the moon although he can’t remember why. It’s your job to go through his memories all the while getting to know Johnny and his desire to go the moon.

To The Moon is mostly narrative based with a bit of exploration and puzzle solving thrown in, but the story and music completely entranced me to the point that To The Moon is one of my all time favourite games. I honestly struggle to think of a game that has a story as emotionally impacting as this. Just thinking about the ending gets me all misty eyed. It’s hard not to come across as a total fanboy when I’m talking about a game that means a lot to me but I cannot recommend this game enough. In my opinion To the Moon has such a beautiful story and if you’re a fan of narrative driven games you need to give this a go. There’s also more pop culture references in there than you can shake a stick at!