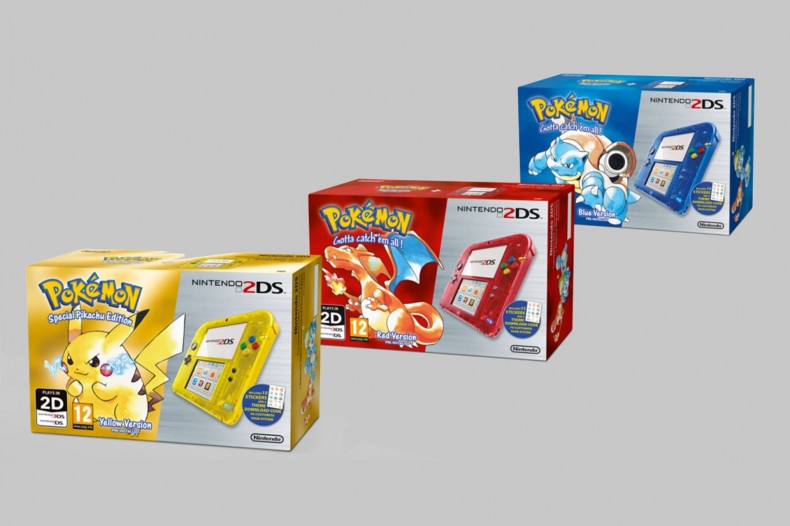 Pokémon are celebrating their 20th anniversary this next month, and to celebrate, they’re releasing three new transparent 2DS bundles which each come pre-installed with a classic Pokémon title.

February 27 will mark two decades since Pokémon Red and Green launched in Japan (Red and Blue in all other territories), and Nintendo will be rereleasing these titles onto 3DS via the Virtual Console on this date. Also releasing on February 27 is transparent version of the 2DS in either yellow, blue or red – the colour of the console will be bundled with it’s corresponding colour of Pokémon game. These Nintendo 2DS Special Edition bundles feature classic packaging reminiscent of the original Game Boy games, a sheet of 15 stickers that can be used to customise the system and a download code for a HOME Menu theme.

Players of Pokémon Alpha Sapphire, Omega Ruby, X or Y will be eligible to receive a legendary Pokémon each month, ranging from Mew from Darkrai to Arceus. They will be distributed through various methods within Europe throughout the year.

A variety of new Pokémon games will be released this year also: Wii U exclusive Pokkén Tournament is set for launch this spring, and 3DS will be receiving Pokémon Rumble World on January 22 and Pokémon Super Mystery Dungeon of February 19. 2016 will also the release of Pokémon GO, a new interactive title for smartphones which was announced last September. Pokémon GO is a collaboration between the Pokémon Company, Niantic, Inc., and Nintendo which will allow fans to use real-world maps to catch a variety of Pokémon. It is slated for release this year on iOS and Android devices.

Currently an English, Journalism and Creative Writing student at the University of Strathclyde. Based in Glasgow, I spend most of my free time playing video games ranging from Japanese visual novels to horror games. You can contact me at greg@godsiageek.com!
MORE LIKE THIS
20th Anniversary2DSAnniversarynintendo