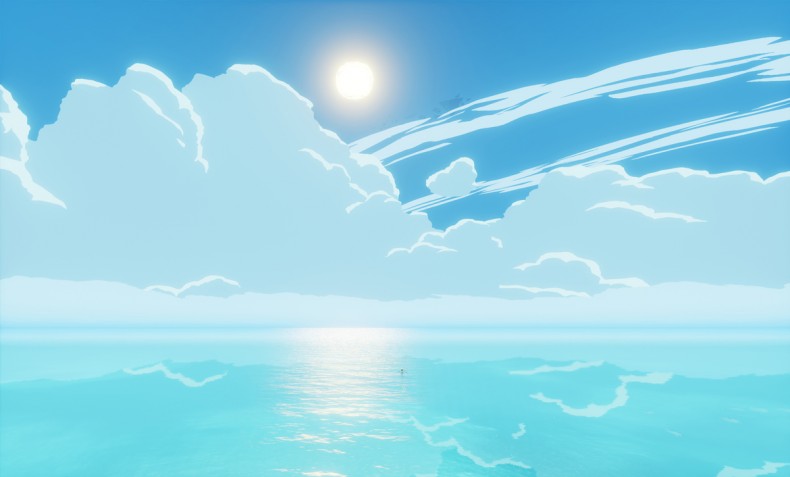 Before I was even aware that members of the team behind the beautiful undersea adventure ABZU also worked on Journey, the indie darling of 2012, I immediately sensed the similarities. A lonely character exploring a stunning, distinct world that yet somehow feels rather eerie, mysterious; the way a simple sprite interacts with this world with only beeps and bops, with the all other sound coming from a rousing score, and did I mention that it’s beautiful? I mean, really, the Ocean and its inhabitants have never looked better in games. I have little doubt that ABZU will be lauded as the “new journey” or “the Journey of this generation”, but ABZU does have one thing holding it back.

I like games that explore under the sea and all the amazing life it has to offer, and games like that are in painfully low supply. In fact, the only one I can actually think of is a Scuba Diving game on the Wii. So ABZU has me really interested on that point, especially as there are statues scattered throughout the world that you can just sit on and the camera will then go and follow a fish as it goes about its life, swimming and eating – and it will tell you what species of fish you’re watching, too. It’s pretty inconsequential, but also quite tranquil and relaxing, and a very nice touch. But the real joy I had in my brief time playing ABZU was just interacting with the fish on the screen, which at one point, I was told, were 10,000 strong. To get so many fish on the screen the developers had to do code them a non-traditional way by removing the internal skeleton, but that is quite expensive. So to work around that they worked out how to drive their motion through mathematical equations which meant they went from having 100 on-screen fish to 10,000. It made the area I was in feel alive and it was well worth the turmoil the devs went through to get it working. The fish come up to you when you press circle and make a sound, they don’t exactly do much but gather together, but it does look great.

Just like Journey, ABZU will be an ambiguously told story in which you have to travel from one point to the other, with some hidden secrets along the way. Narratively it feels remarkably similar to Journey and seems to follow a lot of the same beast. The world will go from bright and harmonious, to sudden darkness and dread, so it’s clear they’re trying to evoke those same emotional response that Journey did. Though this time the big bady will probably be the great white Shark that liked popping up every now and then and scaring me.

While I can see ABZU getting lots of praise for it’s beauty, story and the feels it will no doubt cause, I can see it coming for quite a bit criticism on how it controls – it’s certainly the aspect of the demo that disappointed me the most and is holding me back from singing its praises to the heavens. After initially watching a developer play the demo, it looked as it would control smoothly, as if you’d peacefully glide through the water – he did say that ABZU was a scuba diving game without the pains of scuba diving, after all. So after watching how easily the developer did it, it was immediately jarring when I picked up the controller. It’s because keeping the analog stick pushed down doesn’t move you forwards, it instead makes you swim in vertical circles. To swim you have to point in the direction you wish to go in, let go, and then begin moving by holding the trigger. While I imagine it’ll get easier with practice and eventually become second nature, at the time it was hard to get used to. It just made my swimmer feel clumsy, slow and clunky, as his movement wasn’t seamless, I was constantly having to stop and start to get moving in the right direction.

So, while I am certainly excited to get my hands on ABZU when it releases in August, as I am very much intrigued to see what the mysterious story has to offer, I do hold some concerns that the movement of the diver may be something that rips me out of the experience.