previous
Firewatch has sold nearly a million copies, has a movie adaptation in the works
random
next
Paladins Rare Skin Giveaway
0 comments 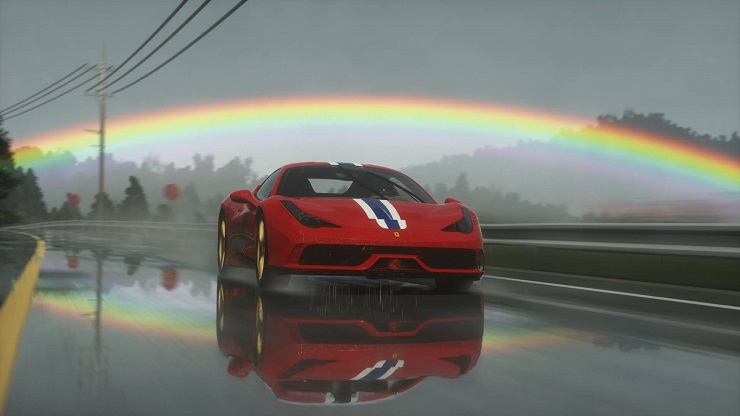 Racing games have enjoyed a lot of success over the years, from the likes of Gran Turismo and Ridge Racer on the original PlayStation, Sega Rally and Codemasters’ TOCA Touring Car Championship, and of course there’s the always fun Mario Kart. It’s a sporting genre that arguably has more variety than any other, but despite a large number of fantastic releases on PS3 and Xbox 360, the popularity of racing games started to decline.

That’s not to say that they didn’t sell, or even that they were bad, but something seemed to hold them back. Perhaps it was fatigue, with four Forza Motorsport games on 360 (plus Forizon), yearly F1 updates that varied in quality, Gran Turismo’s eventual fifth release being a disappointment, and more than a few Mario Kart clones. Anything a bit different tended to fail too, with the likes of Blur and Split/Second releasing too close to one another and neither getting the recognition they deserved as a result. One of my favourites of all time, Race Driver Grid, was at least released during that generation and sold quite well due to a release that landed right in the middle of a summer lull, but it took a full five years for a sequel to finally arrive and that was seen as a disappointment by many fans of the original.

No matter the reason, it was certainly a strange time for racing games. There were big successes, but only a few seemed to catch the eye of the mass market and the ones that did were usually forgotten as quickly as they had risen to fame.

So what has changed? With the release of the Xbox One and PS4, the racing genre seems to be on the up again, and the sales figures are decent as a result. Metacritic supports an increase in quality across the board as well, with only one or two receiving lower scores than their series’ previous outings, so developers are definitely doing something right. Let’s use the Forza series as an example. Forza Motorsport 4 was released just two years before the Xbox One’s release, receiving high review scores and selling a little over 4.5 million copies on Xbox 360. This was six years into the lifespan of Microsoft’s console, at a time when its install base was reportedly north of 40 million. Forza Motorsport 6, released in 2015, has sold nearly 1.7 million copies to date and we’re only in the Xbox One’s third year, with an install base of around 22 million. Looking at it purely by numbers, Forza 4 was bought by around 10% of Xbox 360 owners from the console’s sixth year onwards, whereas Forza 6 has so far already been bought by nearly the same percentage of the Xbox One’s growing install base. This suggests that sales are likely to grow even further, at least for Microsoft’s flagship racer.

What about the multiformat options? That’s a little more difficult to calculate, but let’s give it a shot. Need For Speed Rivals, the last release of the series before EA moved away from the last gen consoles, sold a total of around 5.1 million units across five formats including the PS3 and 360, those alone boasting a combined install base of around 170 million. Conversely, Need For Speed (2015) has sold around 3 million copies to a total install base of a much smaller 65 million owners of PS4 and Xbox One. The F1 games have seen a boost in sales too, with the (admittedly poor) 2014 game releasing only on 360, PS3 and PC to sales of just 800k units. The 2015 game, itself another disappointment, eschewed the last generation and came out to sales of around 900k on a much smaller install base on PS4 and Xbox One.

However you look at it, sales are up. With a much smaller install base, the percentage of console owners buying racing games is higher than you may have expected. Even new IP are selling well, with games such as Project CARS selling over a million and DriveClub hitting the 2 million mark.

Obviously the visuals are much improved, which is unsurprising given the power of these new machines. Forza Motorsport 6 and DriveClub boast screenshots that can genuinely be mistaken for photos, and not because of ‘bullshots’ but via players’ own screengrabs. AI is probably the biggest improvement over the last generation, with the Forza games using Drivatar technology to give real players’ driving styles to AI opponents. Each racer has their own personality, making mistakes or driving aggressively, much like real drivers. Other games don’t have the luxury of Drivatars, but developers are using the processing power of the PS4 and Xbox One to give opponents a more realistic driving style, moving around the player and giving them racing room, instead of sticking rigidly to the racing line. Codemasters’ games have always displayed impressive AI, with last gen games such as Grid and its F1 games doing a good job, but F1 2016 easily bests them. There are exceptions of course, with the latest Need For Speed displaying some of the worst ‘rubber band’ AI I have ever seen. The recent Assetto Corsa, as pointed out in Dan Naylor’s review, is also a huge step backwards. Its AI is comparable to PS2 quality, rarely moving away from the racing line, even if you happen to be in the way. Luckily, Assetto Corsa’s handling model is one of the best around for driving simulators, but be warned: it is not easy. I’m by no means an expert, but I don’t use assists in simulation games and can beat them on harder difficulties, and I’m really struggling with Assetto Corsa.

But I digress. The quality of these games are higher than ever before, and sales are up in comparison to the previous generation, which seems to be enticing publishers into taking a chance on new racers. This generation’s focus on indie development is also giving developers more licence to experiment, and things like Kickstarter and Steam’s Early Access gives developers more control and more direct feedback to bring their own visions to life. Project CARS used its own crowdfunding platform to allow PC gamers to essentially test Slightly Mad Studios’ game throughout its production, which resulted in a more refined simulation. Bandai Namco took notice and eventually published the full release, bringing it to consoles and helping to sell nearly 1.5 million copies, showing that gamers do want these games. Assetto Corsa used Steam’s Early Access system to develop the handling and gameplay for a long time, before finally getting the attention of 505 Games and ensuring its recent console release.

Racing games are better than ever now, and the release schedule is more populated as a result. Since September 2015, we’ve seen the release of Forza Motorsport 6, Need For Speed, Trackmania Turbo, Dirt Rally, Valentino Rossi: The Game, F1 2016 and Assetto Corsa. I have sunk many hours into a few of these, and will continue to do so for a long time due to the inherent longevity of the genre – these games can last for years, with the right selection of circuits, or a good open world. This leads me neatly to Forza Horizon 3, out now. Using a slightly tweaked version of the Forza Motorsport handling model, the Horizon series offers the same thrills but with the added caveat of an open environment to just drive around at your leisure. And with the right group of friends, driving around in Horizon 2 could rival the most fun online experiences out there.

DriveClub VR is coming in October too, alongside Sony’s new Playstation VR headset. Essentially a re-release of DriveClub but with new content (and the obvious VR integration), it could usher in a potential new era of VR racing. This has been in PC games for a while thanks to Oculus Rift, and is genuinely great fun, but the longevity of VR has yet to be determined. Especially on consoles, without the ability to mod in support, but if PSVR does well enough then we may see developers patching in support for their existing games on PS4. And who knows, maybe Polyphony Digital will add VR support to the recently delayed Gran Turismo Sport. Given that it now has at least an extra few months of development time, it would make sense for Sony’s flagship racer to include support for its newest peripheral.

With VR potentially adding an extra layer of realism to simulations (and exhilaration to other racers), and sales seemingly already up on the previous generation, racing games are certainly back on track. As long as the genre avoids oversaturation, the future could remain bright.