Hands-on with Dishonored 2, The Clockwork Mansion 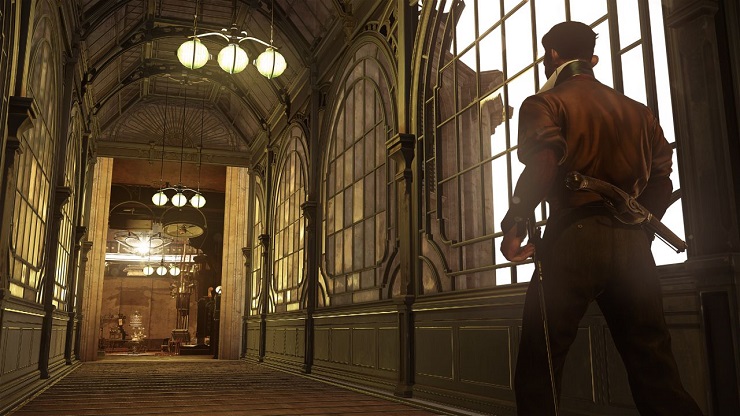 If you’ve ever played the original Dishonored, you’ll know why the release of its sequel is a pretty big deal. Developed by Arkane Studios and published by Bethesda, it redefined the stealth genre with its wonderful control system and freedom, giving you the option to kill, choke out or ignore the enemy, providing consequences to whichever path you decided to follow. With a sequel just around the corner, I recently spent a couple of hours at Bethesda Softworks’ offices playing a level of Dishonored 2 called The Clockwork Mansion, and I have to say, it was pretty good.

In the level, I had two objectives: Rescue Anton Sokolov and kill Kirin Jindosh, the Grand Inventor to the Duke and creator of the Clockwork Soldier; a standard mission as far as Dishonored goes, but it still proved challenging. There were plenty of enemies to fight, puzzles to solve and different routes to explore, and I could finish the mission in a number of ways. There are some changes and improvements in Dishonored 2 even if they don’t feel revolutionary, but if it ain’t broke, don’t fix it, right? Visually, Dishonored 2 is gorgeous and the amount of detail put into everything is impressive. The steampunk inventions, the renaissance aesthetic of the city and the architecture of the mansion are magnificent. There were 3 different floors to the building and each one was designed uniquely, providing some hidden areas and surprises around every corner. Polished marble, expensive lion sculptures and majestic staircases set the precedence for the mansion, but there’s something more sinister once you get past it. Pulling the configuration levers changed the structure of the rooms you stand in, with Jindosh’s creative and evil mind revealed through each intricate transformation.

Along with taking down guards, Jindosh’s Clockwork Soldiers are aggressive and skilful, giving you a tough time of it. The first play through I did with Corvo had me fall to them a number of times, but after you understand how they move and where their flaws are, it becomes significantly easier. They overheat after constant attacks, can have their arms sliced off, and from behind you can ram your blade deep into their control box – you just need to be patient and observant.

The big difference this time is your ability to play as both Corvo and Emily. Dishonored 2 is set 15 years after the original, so Emily is no longer a kid. In fact, Emily is a fully fledged badass now, and her powers are quite different to Corvo. Both characters control the same in terms of movement, speed and attacking, although Emily does feel more nimble than her aging father. It’s the supernatural abilities that separate the two, and how you use them to gain advantage of your enemies is where the differences can really be seen.

The two abilities that stand out in Emily’s arsenal are Domino and Shadow Walk. Domino bond enemies by an incandescent thread, and if you take down one of the enemies attached, the other goes down as well. There was a part of the level where I used the ability on two guards stood next to barricade overlooking a filthy pool of water. I attacked the first and knocked them into the water, with the second being dragged in too. Shadow Walk turns you into a crawling and creepy menace, scuttling across the floor at great speed, terrorising enemies by throwing, impaling and wreaking havoc on them.

If you can remember Corvo’s Blink ability (he still has it by the way), Emily now has something similar called Far Reach. You move just as fast as Corvo, but the precision at where you move to and the opportunity to link it with other attacks is quite special. Arkane has put great effort into making the two protagonists feel different, and they do, especially when you’re using your special talents.

In the level I played, Corvo was using abilities you’ll have experienced in the first game (Wind Blast, Blink and Bend Time), and overall he doesn’t feel too different. Emily feels like the star of the show and rightly so, but it’s still nice to have Corvo available because of how much fun he is to play as.

Dishonored 2 has a lot of promise, even if it does feel like more of the same. Emily is a welcomed inclusion and her abilities are excellent. Having Corvo back is a natural progression, and getting to play as both will have you replaying missions and attempting completion in a number of ways. If the finished game is anywhere near as good as The Clockwork Mission, I’ll definitely be getting on launch day.

Video games are cool. Don't let anybody tell you any different.
MORE LIKE THIS
Arkane Studiosbethesda softworksDishonored 2